Duchess of Sussex Meghan Markle’s history with the tabloids has been, well, let’s say complicated to say the least. She and husband Prince Harry made headlines recently when they announced they were suing some of these tabloids (namely The Daily Mirror and The Sun) over alleged phone-hacking.

Meghan stans on this side of the pond are 100 percent in favor of the move, but it’s pretty unprecedented. The tabloids have been brutal to the British monarchy for decades. A particularly tragic consideration is the unrelenting media scrutiny experienced by Princess Diana, Harry’s mother, who was killed in a car accident while being chased by paparazzi. Other royals who got a particularly raw tabloid deal include Camilla Parker Bowles, for her affair with Prince Charles while he was married to Diana, and Sarah Ferguson, who was married to Prince Andrew (yeah, that one), for, well, everything.

Fergie eventually did sue the tabloids, but only after years of distance from the family. Bowles, however, took a different approach. Royal commentator Penny Junor notes that Duchess Camilla, who is now married to Prince Charles, chose instead to befriend the media, eventually leading to a relatively good media relationship today. “What Camilla did, is never, ever complain,” Junor says. “She never spoke to anybody, just kept her head down.” And when she was made a legitimate member of the family by marrying the prince, Junor says she made it a point to learn their names, ask about their lives, and remember them, resulting in very good publicity from there on out. “And I think that Meghan could do worse than take a leaf out of Camilla’s book,” Junor says.

Something tells me that’s not how Meghan is gonna play it.

Gossip and celebrity magazines in the U.S. have been way kinder to Meghan Markle than their British counterparts, so if you’re having trouble keeping track of all the terrible things that have been said about her over the years, we’ve got you.

Walk with us down memory lane as we revisit every negative story the tabloids have printed about Duchess Meghan in the past three years. 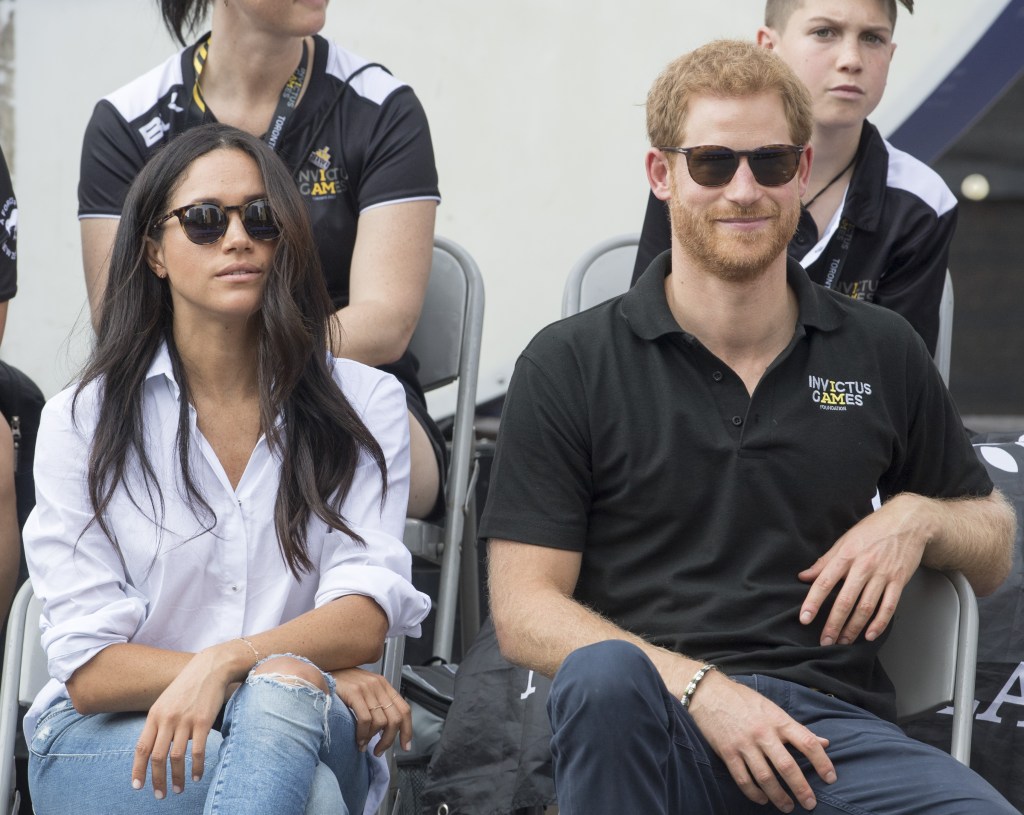 Harry and Meghan started dating publicly in 2016 when they began to be photographed together.

Among the first headlines printed about her include this gem from The Daily Mail stating, “Harry’s girl is (almost) straight outta Compton,” incorrectly reporting that Meghan was from “gang-scarred” Crenshaw. Um, she grew up in Hollywood, went to some of the best private schools in L.A. and her mother lives in the extraordinarily wealthy View Park-Windsor Hills neighborhood, where the median price of a home is $771,000.

Rachel Johnson, sister of Boris Johnson, wrote in a different Daily Mail story, and we quote, “…the Windsors will thicken their watery, thin blue blood and Spencer pale skin and ginger hair with some rich and exotic DNA. Miss Markle’s mother is a dreadlocked African-American lady from the wrong side of the tracks who lives in L.A…” It’s hard to even know where to begin, so let’s move on.

Another, less racist but still awful pre-wedding criticism of Meghan is an op-ed in Spectator which opines that Meghan is unsuitable for Harry because she is divorced (which goes against Anglican canon law) and, even more confusingly, because she is a “glossy” actress and therefore teaching little girls that being a pretty celebrity is the ultimate accomplishment.

Oh, and then there is the whole thing with her dad, who, for a while there, seemed determined to draw attention to himself in some way or another. While Meghan gave every indication she did not have, nor did she want, a relationship with her father, she was endlessly criticized for failing to support him somehow.

It should be noted, Junor says at the beginning of the relationship, Meghan was widely embraced by the British public precisely because she is biracial, and representative of a large portion of the British population who are people of color or had migrated to the UK from other countries. “Because she’s mixed race she seemed to be bringing into the realm of monarchy a new lot of people, people for whom the monarchy had not been that relevant before.” 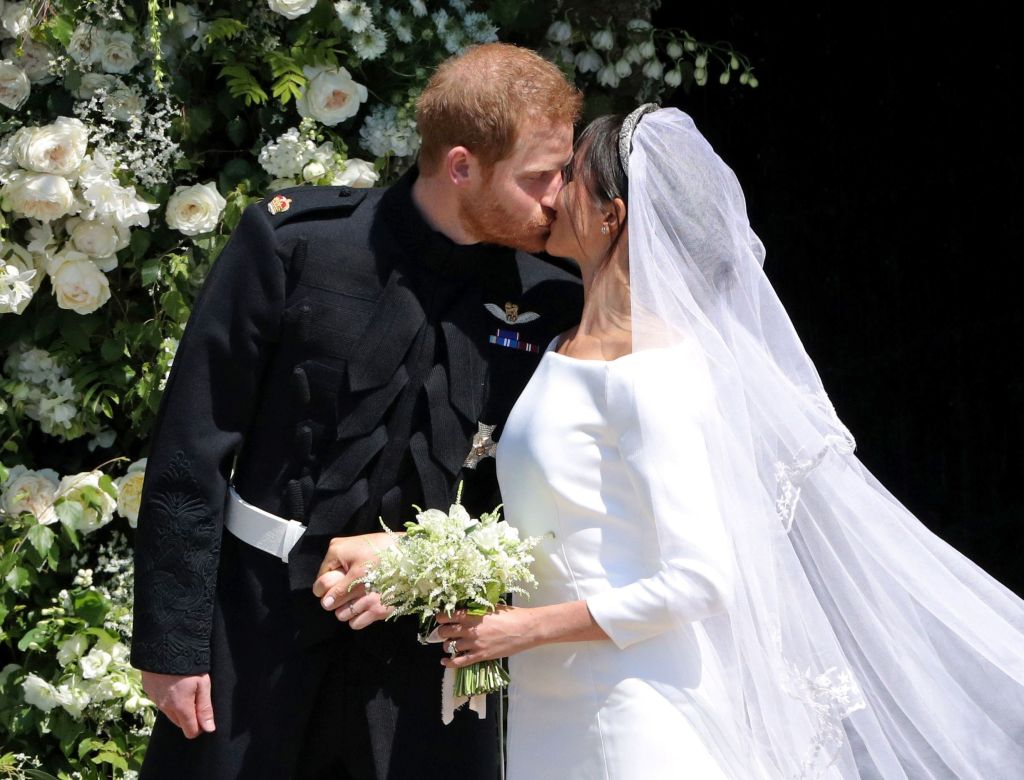 For a time, in the leadup to her wedding to Prince Harry, the tabloids stopped hassling Meghan as much. For a very brief period of time, Meghan was beloved. “She seemed to tick a lot of boxes and she seemed to make Harry very, very happy. So there was huge enthusiasm for her,” Junor says.

She made Kate Middleton cry over Princess Charlotte’s dress, maybe.

She caused a rift between Harry and Prince William. 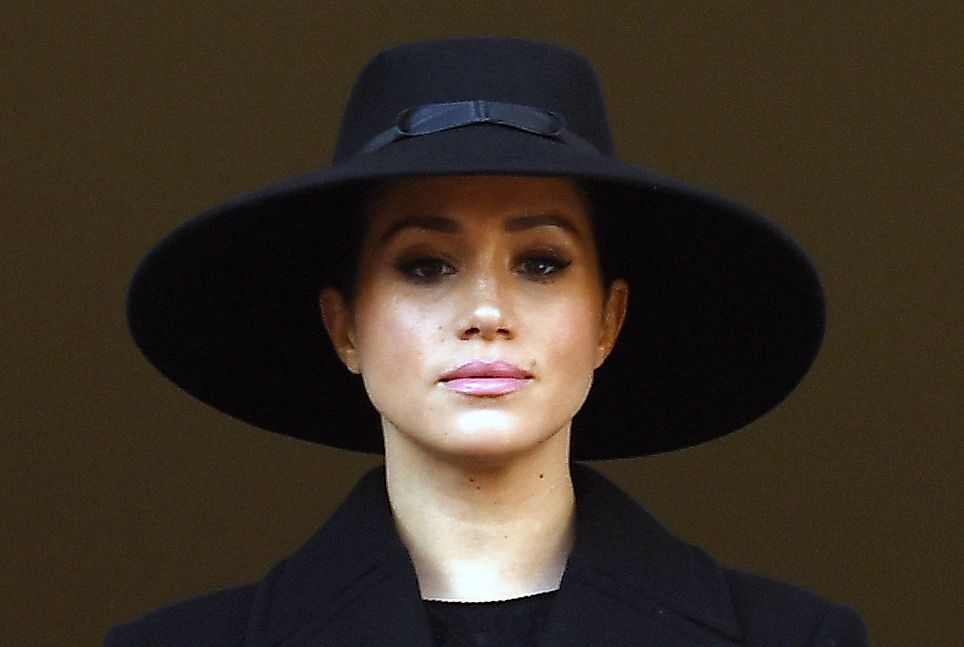 Soon after the marriage, an image of Meghan Markle as “Duchess Difficult” began to emerge, in which she was painted as a Miranda Priestly-adjacent monster who couldn’t stop harassing her staff.

She is unreasonably demanding.

Kate Middleton is loyal to her staff.

Now that Meghan’s character has solidified into an image of a demanding, entitled American actress (possibly from the wrong side of the tracks), the bad press kind of snowballs. She is constantly criticized for royal etiquette faux pas, her spending, her birth plan, her parenting, her travel choices.

Junor says she can be forgiven somewhat, as an American, for not fully understanding the “subtleties” of the monarchy that a person born into this kind of society would already know. Speaking as Americans ourselves, none of this seems remotely logical, but it has been a major sticking point with many monarchists, even those who are otherwise favorable to her. Pointing particularly to Meghan’s decision to keep the birth of her son as private as possible, and to her Vogue guest-editing spot—widely seen as having a political bent—royal commentator Richard Fitzwilliams says, “This is when royal commentators started to be very critical.”

Meghan closes her own door and the world goes nuts.

She guest edits Vogue and gets too “political.”

She incorrectly wished her nephew Prince George a happy birthday.

She gave Kate Middleton a dream journal (this is bad).

Prince Harry is apparently always annoyed and/or embarrassed by her ignorance.

She fights with the Queen about jewelry. 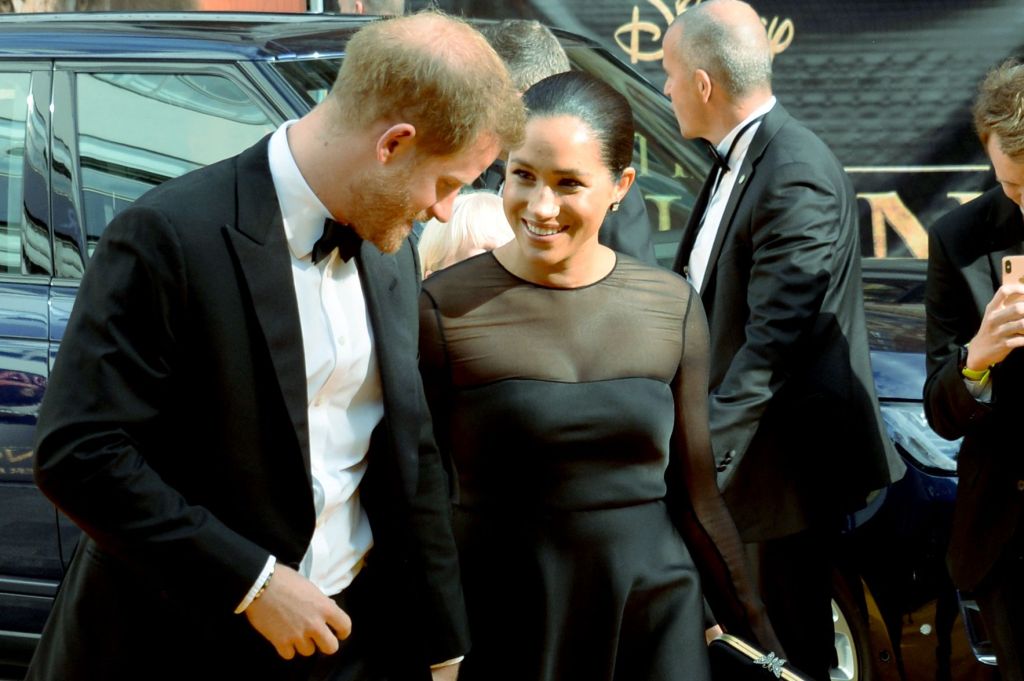 Royals are not supposed to be flashy with their spending. This is kind of understandable considering they are funded by the British public. After Meghan spent a lot of money on a pretty elaborate baby shower in New York, the stories of her extravagance became more common— and sometimes exaggerated to the point of straight up lies.

Everyone was very offended by her fancy baby shower 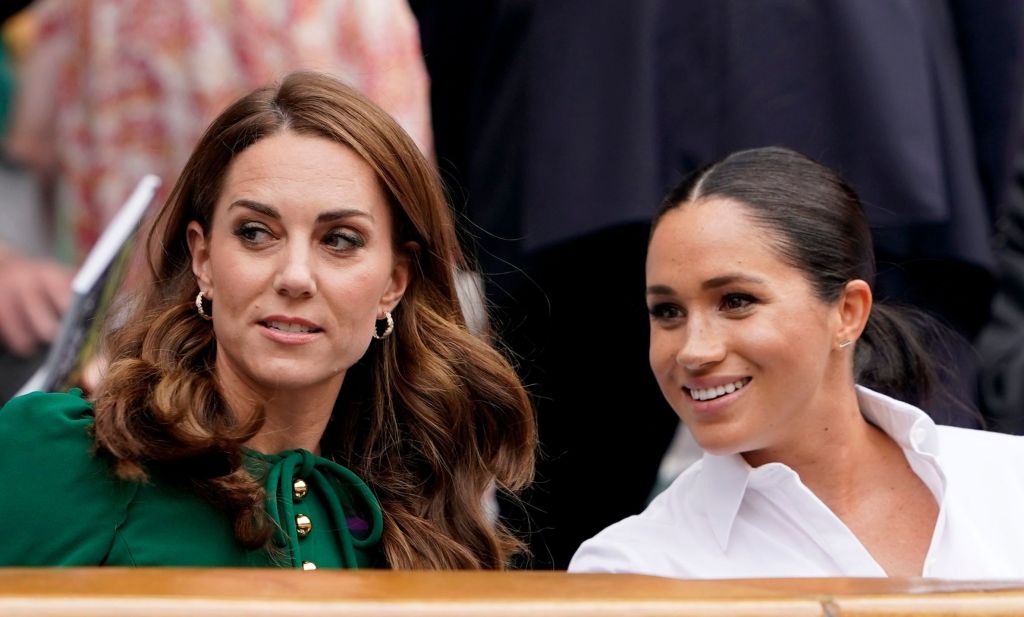 Ever since her wedding, Meghan has been blamed, at least in some part, for the apparent distance between brothers Prince Harry and Prince William. Fitzwilliams notes particularly the reports that William told Harry his courtship with Meghan had been far too quick, seen by many as the start of the rift. For monarchists who feel a great love and loyalty to the two princes, this is a difficult pill to swallow. Harry was also thought to have said, “What Meghan wants, Meghan gets,” in the leadup to the wedding. “The reason this got legs was that Meghan was supposedly impossible to work for,” Fitzwilliams says. “The problem is, every member of the staff that left tended to reinforce the rumor.”

And so, the Duchess has never been able to shake her reputation as a difficult, demanding, unpleasant person who is constantly offending everyone she encounters, often the Queen.

She doesn’t want to go hunting at Balmoral.

She’s not spending Christmas with the Queen.

She gave her neighbors a list of demands about how they interact with her.

She doesn’t get along with Beatrice and Eugenie, and there have been some wedding snubs.

She asked security to refuse photos with anyone at Wimbeldon.

Her love of avocado toast is an endorsement of human rights abuses (still trying to figure this one out).

Literally everything to do with her kid 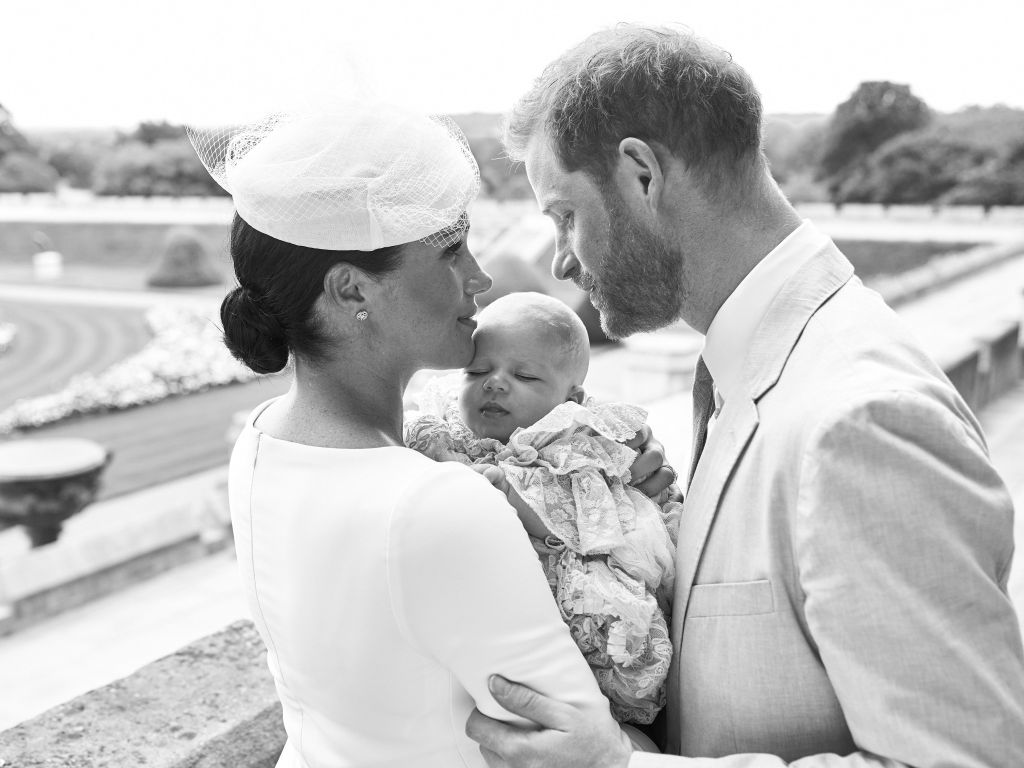 Mom-shaming is nothing new, and any celebrity mom is bound to get at least some flack. As possibly the most famous new mom in the world (who’s also dealing with centuries of royal etiquette), Meghan Markle gets more criticism than most. Because her son is automatically a public figure supported by the British people, commentators argue that the public has a right to see him and maybe even weigh in on his name. Fitzwilliams says this decision, “propogated the notion that Archie was, so to speak, a private citizen,” adding, “if the British public pay however million for Frogmore Cottage, it was not fair to keep Archie a private citizen.”

Unsurprisingly, Meghan as a mother was not well-received by the tabloids.

He was announced too late, and she should have done the hospital photo.

The christening guest list was lacking some important names.

She holds him wrong.

So, there you have it, folks, as complete a rundown of all the tabloid rumors and critiques about Meghan Markle as we could gather. As a public figure this famous, there is really no avoiding some criticism. But I think we can all be adults here and admit—this is too much.