Meghan Markle’s pregnant body language looks a lot different than Kate Middleton’s, and it has everything to do with their ages and when they were pregnant. As opposed to Middleton—who is 36 and has three children (Prince George, 5, Princess Charlotte, 3, and Prince Louis, 8 months) with Prince William—Markle, who is 37, just announced her first pregnancy with Prince Harry in October. The couple is expecting their baby in the spring, though there are reports that it could be even sooner.

Though they’re essentially the same age, Judi James, a body language expert, explained to Express that Markle’s pregnant behavior differs from Middleton’s because this is her first pregnancy. Though Middleton was 36 when she gave birth to Prince Louis in April 2018, her pregnant behavior was less baby-bump-holding and more calm because Louis was her third baby, according to James.

“Meghan’s bump-cradling also suggests she will be an openly doting and enthusiastic mother,” James said. “Kate’s response to baby Louis has been subtly doting and quietly besotted but Meghan become a first-time mother at an age when Kate has just given birth to her third child and the excitement in her facial expression compared to Kate’s calmer happiness signals reflects that.”

However, the different ages they started having children isn’t the only way Markle and Middleton’s pregnancies differed. According to James, Middleton’s “more formal” pregnant behavior reflects her more traditional values as a royal. As opposed to Markle, who has cradled her baby bump in pictures, Middleton often covered her body with coats during her pregnancy.

“Kate’s ‘bump behavior’ is very indicative of her rather more formal, careful and understated approach to being a royal, while Meghan’s more open style of sharing her story leads to the kind of announcement gestures that form a very public declaration of her delight and pride at being a mother to be,” James said. “Kate’s response to her bump is confident, practical and very much ‘business as usual.“Her coat is worn to part cover it and her body language looks unchanged by her pregnancy.”

She continued, “You’d probably look at her face rather than her bump and—put bluntly—she probably wouldn’t get a seat on a bus using subtle bump body language like this, while Meghan’s much more obvious and emphatic pregnancy signals would get people budging up in an instant.” 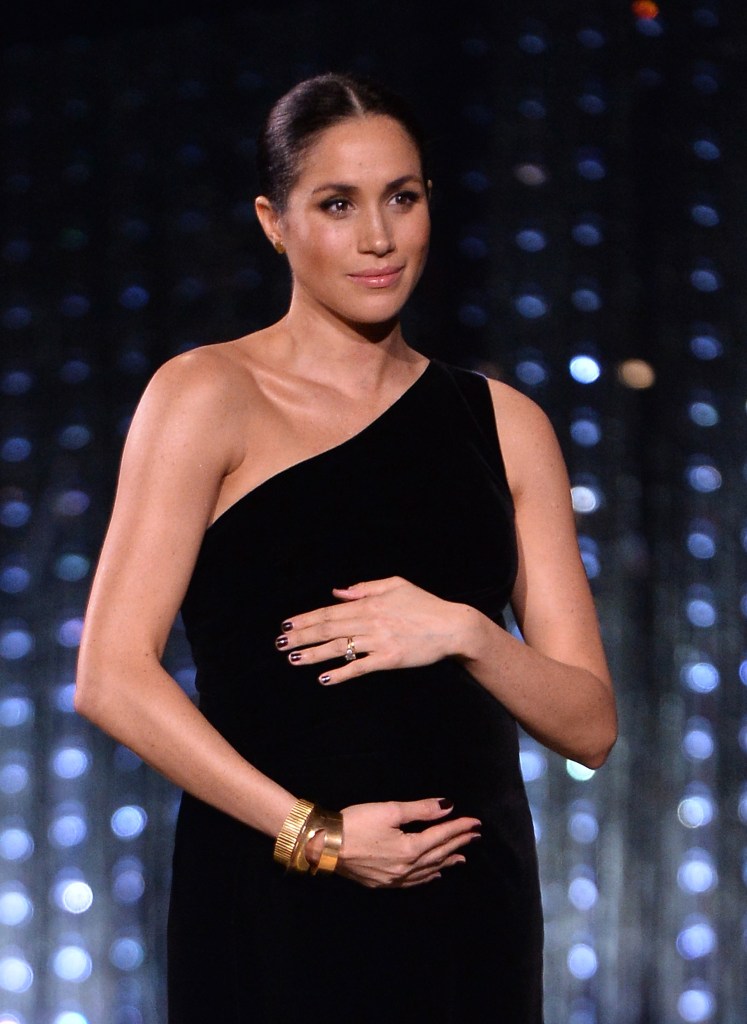 According to James, Markle’s bump-touching signals more than her non-traditional royal values. James told Express that Markle’s constant bump-cradling also suggests her openness to talk about her pregnancy, as seen at public appearances where she’s said, “I feel very pregnant today.”

“Meghan has been a ‘bump-toucher’ from the day her pregnancy was announced though and ever fibre of her body language, from the bump-covering hands to the knowing, excited smile, lets us know she’s pregnant and wanting everyone else to know too,” James said. “This more open signaling suggests a desire to bring her pregnancy into the conversation as her favorite topic of choice. It creates open rapport with the people she’s meeting rather than keeping a more private approach to the baby.”

She continued, “Meghan is clearly far more happy and comfortable with public ‘sharing’ than our more traditional royals and her naturally tactile and eloquent behavior has always been very much of a tie-sign to send out conversational signals to the widest audience, while royals like Kate will be more used to keeping a slightly formal distance.”

There’s no one way to have a “right” pregnancy, and Markle and Middleton show us that. They might be different (one might be a bump-holder and the other might want to cover up with coats), but that’s no reflection of who they are (or will be) as mothers or women. Every pregnancy, royal or not, is as beautiful as the next.