Meghan Markle and Prince Harry are gearing up to sit down with Oprah Winfrey for an exclusive tell-all interview tonight, in what is shaping up to be one of this year’s must-watch television events. It’s not every day that we normal people get an inside look at how the royal family’s inner circle actually operates! While I don’t yet know what Markle will say in the interview or how much tea she plans on spilling, I do know exactly what she’ll be wearing for the occasion—and her look alone says a lot about how she feels.

The very first (and very dramatic) trailer for the interview dropped last Sunday night, while many of us were tuned in the 2021 Golden Globes. The clip was only 30 seconds long, but it gave tons of insight into what the former Duchess of Sussex wore while chatting with Oprah—and the tiniest peek at what exactly they discussed. By the looks of it, the conversation centered largely around the couple’s decision to distance themselves from the royal family last year—as well as their choice to permanently step down from their royal duties altogether and move to Los Angeles.

This should go without saying, but the former Duchess of Sussex looked really, really good. As usual! Markle wore a black midi dress by Giorgio Armani that retails for a whopping $4,700. The wrap-style piece featured a deep (yet tasteful) v-neck and a few abstract white lotus flowers. Many know the lotus as an instantly-recognizable symbol of rebirth, so her choice in attire certainly seems like a message to her fans that she is doing just fine after all the recent shifts.

Sorry to all you Meghan Markle fashion stans out there—this is one look you wont be able to copy any time soon. Despite the sky-high price tag, the designer frock is currently sold out. No surprise there! Her accessories are even more unattainable, if you can believe it—she opted to wear a delicate Cartier tennis bracelet that once belonged to Princess Diana, likely to symbolize that she and her husband still intend to keep his mother’s memory alive. She also wore a pair of Aquazurra heels, which is no surprise to anyone who’s been following her footwear choices over the years. 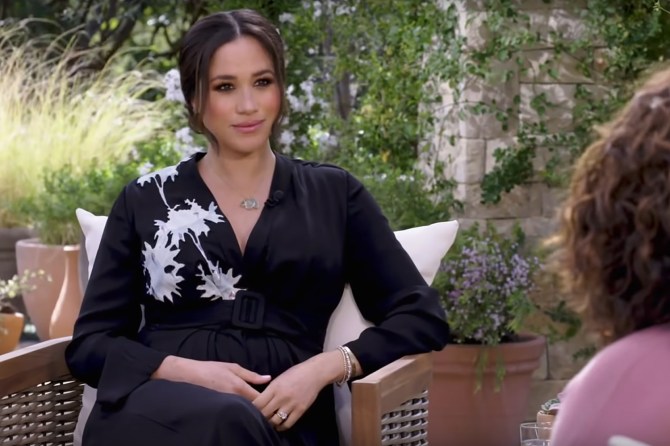 Duchess or not, Markle is still a fashion princess in my eyes. Her style has always been effortlessly chic and the careful consideration that went into this look only makes me love her more. It’s no secret that the royal family tends to use fashion to convey hidden messages, and it looks like Markle is still taking a page out of their sartorial playbook, despite giving up her royal title.

If you don’t already have it marked in your calendar, the tell-all interview with Oprah Winfrey is airing tonight (!) on CBS. You already know I have it recorded on my DVR so I can rewatch all of the can’t-miss moments. The British love their tea, after all, so I know for sure they’ll be spilling some!