Days after her 18th birthday in 2011, Megan Nicole’s career looked ready to take off. She’d racked up millions of views on a Rihanna cover with country singer Tyler Ward, that went viral. Her own YouTube following was escalating to the million-subscriber mark. And, after P. Diddy reached out to her personally and flew her to his Miami mansion, Nicole was signed as the first-ever pop act for Diddy’s notorious hip-hop-rap label, Bad Boy, and its new collaboration with Interscope Records. She was well on her way to making the rare and coveted transition from internet sensation to industry hit-maker—when, after an unforeseen bump in the road, Nicole was forced to pivot toward a different path to success.

Now, Nicole, whose first album as an independent artist, “My Kind of Party,” is due this fall, is reintroducing herself to the public. With 4 million YouTube subscribers and 500,000 more on Instagram, Nicole is determined to make it big—with or without Diddy’s help. “‘My Kind of Party’ is like, ‘Hey. This is my kind of party. This is me and this is what I’m about,’” says Nicole. “It ties everything together nicely. All the songs are a reflection of who I am and my story.” 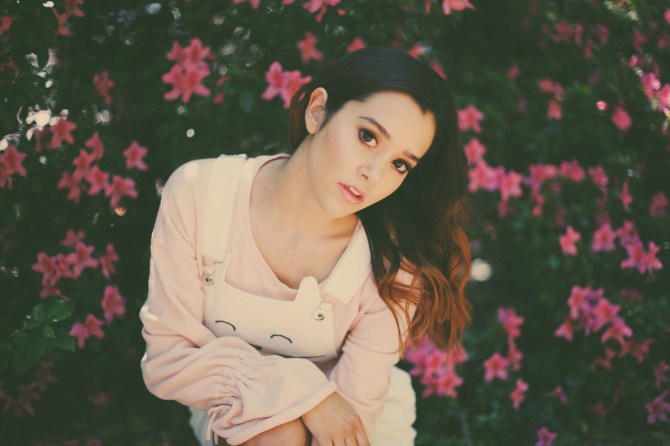 Born in a suburb of Houston, Texas, Nicole, whose father is Mexican and mother is German (among other races) grew up in a loving Mexican-American household where the parties were boisterous, and her childhood was spent molding masa into homemade tortillas with her grandmother. Still, being mixed race, Nicole often found herself on the receiving end of criticism for not being “Latina enough,” especially because she doesn’t speak Spanish.

This is my kind of party. This is me and this is what I’m about.

“There were moments where it was frustrating,” Nicole says. “These people who are saying this, they don’t know me, my family, or my situation. So when they make comments like, ‘You’re not Latina enough. You’re not Mexican enough,’ it’s like, ‘What does that even mean?’ It’s still in my blood. It’s still who I am.” 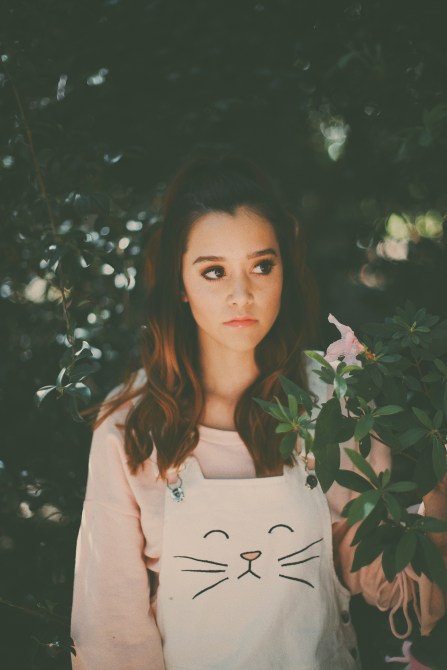 The belittling continued in school, where Nicole was body-shamed for having small breasts. She recalled a moment when she sat down at a table and the girls around her told her to leave because she wasn’t a part of their “Pretty Committee.” She also remembers the first time she was body-shamed by two boys on her way to class.

“To their face, I just rolled my eyes and looked the other way. But of course when they walked away, I was holding in tears,” Nicole says. “I remember walking to my next class and feeling so hurt and angry that people would think that it’s OK to make comments about your body, the body God gave you.”

I remember feeling so hurt and angry that people would think that it’s OK to make comments about your body, the body God gave you.

Nicole found solace in songwriting, a craft she picked up at 15 after learning to play the guitar. From a young age, while singing Michelle Branch and Christina Aguilera on her family karaoke machine, Nicole knew she was interested in music. But it wasn’t until she picked up a guitar that she saw it as a potential career. “The second I learned four basic chords, I began to write my own songs,” Nicole says. “That’s when things really clicked for me with music. I couldn’t see myself doing anything else.”

After a suggestion from her dad, Nicole set up a camcorder in her game room, recorded an acoustic cover of Kings of Leon’s “Use Somebody,” and made her YouTube debut at 16 years old. Slowly, views began trickling in. “It was such a surreal thing,” Nicole says. “At that time, it wasn’t even a thing to be a YouTuber. That wasn’t even a word. That wasn’t even the intention when I posted that video. It was just, ‘Hey, here’s another place to share my music.’”

Nicole’s following really exploded a year later, in 2010, when she was traveling in Colorado for a youth group event. During the trip, Nicole was invited to an impromptu jam session with fellow YouTuber Tyler Ward, who asked her to duet on a cover of Rihanna and Eminem’s “Love the Way You Lie.” Not thinking much of it, Nicole went for it with Ward and then flew home—only to find that the video had hit a million views and her following had reached 100,000 subscribers. “That’s when it became like, ‘Wow. OK. This is a job,’” Nicole says. “I have 100,000 people who took their time to press ‘subscribe,’ so I need to make content for them.”

From there, Nicole’s career soared: She left public school in the middle of her junior year to go on tour with pop-rock band Boyce Avenue. Her first original song, “B-e-a-utiful,” amassed a million views in just two days. That’s when—days after turning 18—Nicole received a message from Bad Boy’s president, Harve Pierre, asking her to fly out to Miami and perform for P. Diddy at his house. “We had to take our shoes off and put slippers on,” Nicole recalls. “I walked through the front door of his house and they were playing my cover music on the loudspeakers. It was such a surreal thing.”

In front of Diddy and his entourage, Nicole performed two songs, an original and a cover of OneRepublic’s “Secret.” A month later, she was signed as Bad Boy’s first-ever pop artist in collaboration with Interscope Records, a well-known pop label that has represented such singers as Selena Gomez and Lady Gaga. “Those guys taking their time to meet with this 18-year-old girl from Texas who is just freshly into music, that spoke to me more than words,” Nicole says. 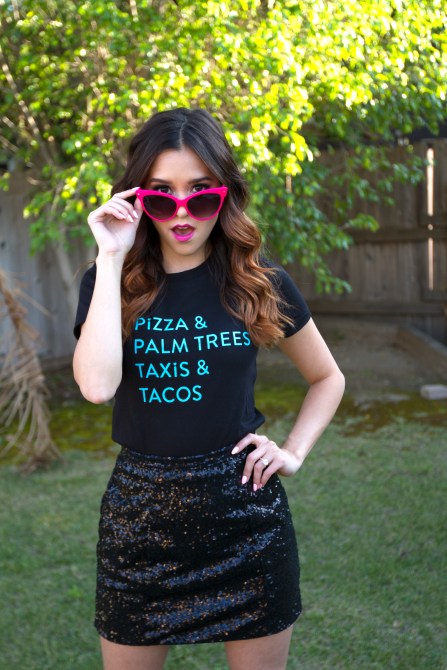 However, being signed to a major label wasn’t everything Nicole expected it to be. After years of slow-to-release music and waiting fans wondering when new material would come, Nicole felt stunted. In 2015, three years after she was signed, Bad Boy and Interscope disbanded, leaving Nicole with a choice: She could either wait for Bad Boy to partner with another pop label or leave and try to make it on her own. “I decided to begin a new journey,” Nicole says. “At that point, I wasn’t really releasing any music and I wanted to write and put music out. That was the most important thing for me. I decided to take that journey on my own.”

I always try to keep putting positivity out there, because the world needs more of it.

And though Nicole was disappointed by the fallout, she has no bad words for Diddy. Instead, she channeled that energy into self-producing her own music, including a handful of one-off singles and an EP titled “Escape” in 2014. Now, Nicole is ready to fully reintroduce herself as an independent artist with her first-ever album, “My Kind of Party.” “The icing on the cake is where we’re at right now,” Nicole says. “The album is very much me when it comes to fun and empowering songs. It’s cool to see how my music has matured as I’ve gotten older.” 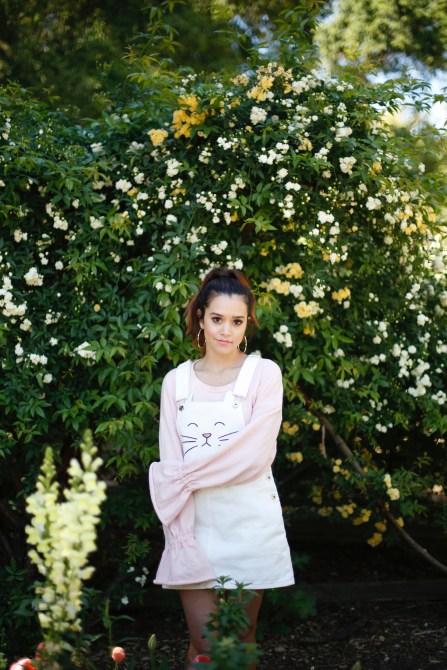 The album, which includes eight tracks and will be sold on iTunes and in physical copy, continues Nicole’s theme of positivity, a musical through-line she developed after overcoming her childhood bullies. “In the beginning, it wasn’t a conscious thing. It was more like, ‘These are the songs I was writing,’” Nicole says. “I was realizing more and more that they had a similar message that brought them all together. At the end of the day, I want to leave an impact on people’s lives where they can listen to my music and feel empowered or have fun.”

At the end of the day, I want to leave an impact on people’s lives where they can listen to my music and feel empowered.

Nicole’s passion for female empowerment is likely what caught the attention of Michelle Obama and Google, who invited Nicole to interview the First Lady for Let Girls Learn, Obama’s initiative to help girls all around the world pursue an education. And while Nicole learned a lot from simply being in Obama’s presence, she admits that her most memorable takeaway was teaching the First Lady how to do a duck face. “Before she came into the room, they told us we couldn’t ask for selfies. So I thought it was hilarious when Mrs. Obama was the one who suggested we take selfies,” Nicole says. “I automatically went to my duck face pose and she was like, ‘What is that? I always see my girls doing that. The little duck face.’ I was like, ‘Yeah! Let’s do one together.’ And so we took a duck face selfie together.”

MORE: Why Shay Mitchell Considers Herself the New Girl Next Door

And though Nicole has come a long way from the girl who shot acoustic covers on a camcorder in her upstairs game room, she hasn’t taken her YouTube beginnings for granted. Along with trying to upload more, Nicole understands the impact she has on fans who see her as a role model, especially on social media. “Those are the people that believed in me from the beginning,” Nicole says. “I always try to be an encouragement to them, and to keep putting positivity out there, because the world needs more of it.”