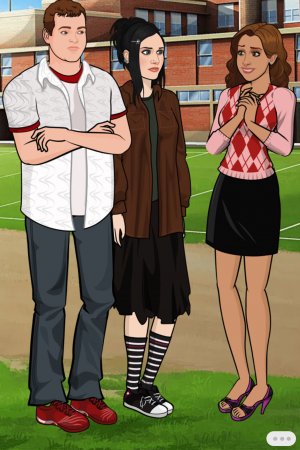 Move over Kim Kardashian, our most favorite popular girls, The Plastics, are getting a mobile game of their own—and this one’s gonna be free.

According to The Hollywood Reporter, the game—which is set to be released later this year—will combine Pocket Gems’ animated interactive storytelling platform with original plots based on the 2004 mega-comedy to create a choose-your-own-adventure gaming experience.

“Even though it’s been a while since the movie came out, it’s been a favorite for people at the company,” Pocket Gems’ Jameel Khalfan told THR. “It’s a really good fit for the platform.”

Khalfan explains that the game will pick up where the film—Lindsay Lohan‘s first and only massive hit—left off, and players will enroll in the fictional high school as seniors, interact with characters, and make your own choices that can affect the plot—including choosing what outfits you wear (crucial, obviously. Tank tops with boob holes, anyone?)

Sources tell THR that although the choose-your-own-adventure format means that your decisions help propel the story along, the backbone will be provided by “Legally Blonde” and “10 Things I Hate About You” screenwriter Kirsten Smith. Though, for all you die-hards, Pocket Gems promises they’ve also worked closely with Paramount to make sure the game feels authentic and true to our favorite teen comedy’s roots.