Bachelor Nation members may be curious about Matt James’ net worth and how much of it includes his Bachelor 2021 salary. Matt, a 29-year-old banker from Raleigh, North Carolina, was announced as the season 25 Bachelor in June 2020.

Unlike the past several Bachelors, Matt is the first Bachelor since Brad Womack in 2011 to not be a former Bachelorette contestant. Though he was cast on Clare Crawley‘s season of The Bachelorette in 2020, Matt never made it on the show as he was chosen as the Bachelor before Clare’s season started filming. (That said, Bachelor Nation members may recognize him as the best friend of Bachelorette alum Tyler Cameron.) However, this isn’t the only way Matt has made history. Matt is also the first Black Bachelor in the franchise’s 18-plus-year history. He’s also the third Black lead overall after season 13 Bachelorette Rachel Lindsay and season 16 Bachelorette Tayshia Adams.

“It’s an honor,” Matt told Good Morning America in June 2020. “I’m just going to lean into myself and how my mom raised me and hopefully when people invite me into their homes on Monday night they’re going to see that I’m not much different from them and they see that diverse love stories are beautiful.”

Now that we know the basics about Matt, let’s read about how much he’s worth, what his Bachelor salary is and what his job was (you know, before he was a reality TV star). Find out about Matt James’ net worth ahead. 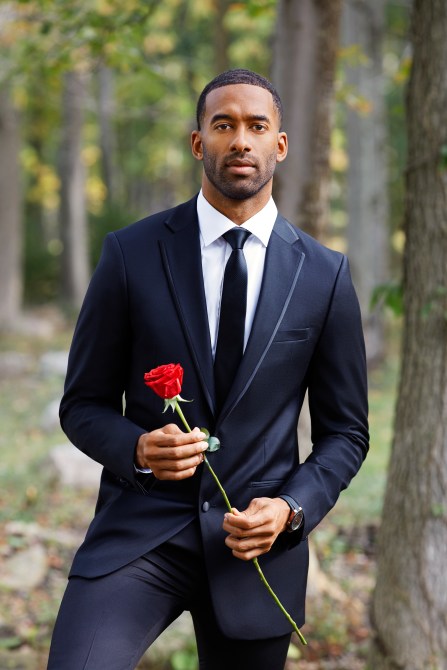 What is Matt James’ job?

Before Matt was the Bachelor, he worked for CBRE Group, INC, a commercial real estate company in New York City. Prior to that, Matt worked at PNC Bank in Pittsburgh, Pennsylvania. Matt is also the founder of ABC Food Tours, a non-profit organization in New York City that educates children in underserved communities about food. Matt graduated from Wake Forest University in Winston-Salem, North Carolina, in 2015 with a degree in economics. Wake Forest was also where Matt met Tyler Cameron. Matt also played as a wide receiver for the Wake Forest Demon Deacons football team from 2011 to 2015.

How much did Matt James make as the Bachelor?

It’s unclear how much Matt’s exact salary as the Bachelor is, but we can assume that he made around $100,000 for about two months’ worth of filming. According to Reality Steve, the current standard rate for Bachelors and Bachelorettes is $100,000. That said, there have been recent Bachelors and Bachelorettes who have made more or less, depending on how good their negotiations skills are.

For example, season 8 Bachelorette Emily Maynard made a reported $250,000 as the Bachelorette in 2012 thanks to negotiations. “The producers have completely changed the format this season in order to meet Emily’s demands,” a source told In Touch at the time. Given that Matt isn’t Bachelorette alum and doesn’t have a Bachelor Nation fanbase, we can assume that he makes around the standard rate of $100,000.

What is Matt James’ net worth?

The question we all want to know: What is Matt James’ net worth? Well, according to FamousBirthDeaths.com, Matt’s net worth is $250,000, which accounts for his Bachelor salary, as well as what he makes from his jobs with CBRE Group and ABC Food Tours. That said, we’re sure Matt’s net worth will increase once his Bachelor season finishes airing and he cashes in those influencer/podcast host/author checks.