As soon as season 3 of The Masked Singer wrapped up in May 2020, fans of the smash Fox reality competition series were  desperate to know all The Masked Singer season 4 release date, spoilers and news they could learn. Luckily, we have updates to share.

But before we dive into The Masked Singer season 4, let us explain what the The Masked Singer is for those haven’t been introduced yet. This insanely popular show is equal parts singing competition as it is a guessing game. Contestants—who run the celebrity gamut from actors and models to music artists—dress up in elaborately designed costumes that also happen to conceal their true identities. They perform for a panel of judges whose sole job is to try to figure out who the person behind the mask really is. As you can imagine, that gets messy.

Things also changed by season 3 of The Masked Singer, when the series’ showrunner decided to stagger the competitors’ introductions. Instead of introducing all the season’s contestants in episode 1, they are revealed over the course of three separate groupings. Showrunner Izzie Pick-Ibarra explained the changes to Billboard in January 2020:

“We changed the format up to make three mini-seasons,” Pick-Ibarra said. “So we have six singers in each mini-season: groups A, B and C. We start with six in a group and they get whittled down to three. Then we go to the next group and the next and then we bring all the singers together so you have nine champions from the groups and they’ll compete against one another to the end.”

Why the change? Those who watched season 3 can probably guess why. “It helps the viewers when we have a cast as large as ours and it’s hard to track people’s stories and personalities if you’re flip-flopping between 18 people from the get-go,” Pick-Ibarra explained. “It’s a way to let viewers know them in smaller groups, and by the time they come together, they have a handle on who each are over 19 episodes.”

For everything we know about other Masked Singer changes—you know, like a new season—just keep on reading.

A version of this post was originally published in July 2020.

The Masked Singer season 4 release date is September 23, 2020. The fourth season was confirmed in May 2020. Earlier this year, Fox CEO Lachlan Murdoch said that the network planned to premiere in early August 2020. That start date was pushed back to September due to the current health crisis.

“Should conditions allow for it, we are planning production in early August of Season 4 of The Masked Singer, which we’ll target for a fall debut,” he said, according to Deadline.

On July 30, The Masked Singer released a season 4 teaser that hinted the cast of characters viewers can expect. The clues include: a Queen Bee; vegetables such as broccoli, cauliflower and mushrooms; sunglasses; two keys, one with the number 34; a bowtie; a Canadian maple leaf; a baseball glove holding a diamond; a yin-yang; a gavel; a stethoscope; 11:11; and a postcard addressed to Mel Rose.

FOX confirmed the list of characters for season 4 in August. The characters include The Gremlin, The Snow Owl, The Crocodile, The Giraffe, The Broccoli, The Popcorn, The Seahorse, The Jellyfish, The Mushroom, The Dragon and The Sun. The Masked Singer season 4 will also include some characters who seem to be new versions of previous costumes: These include Whatcha Macallit (a nod to season 2’s Thingamajig a.k.a. Victor Olapido); Squiggly Monster (a nod to season 1’s Monster a.k.a. T-Pain and season 3’s Miss Monster a.k.a. Chka Khan), and Baby Alien (a nod to season 1’s The Alien a.k.a. La Toya Jackson.) 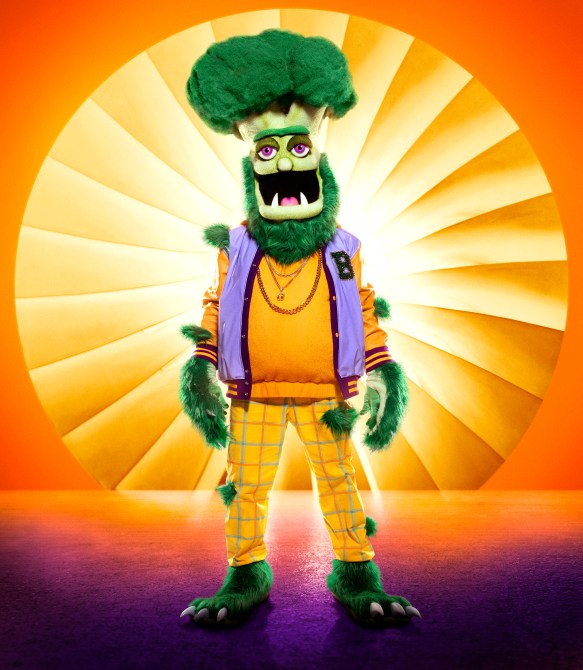 Clue: “I’m a brocco-lean, mean, heart-pumping machine. After all, it’s how I got my six-pack.” 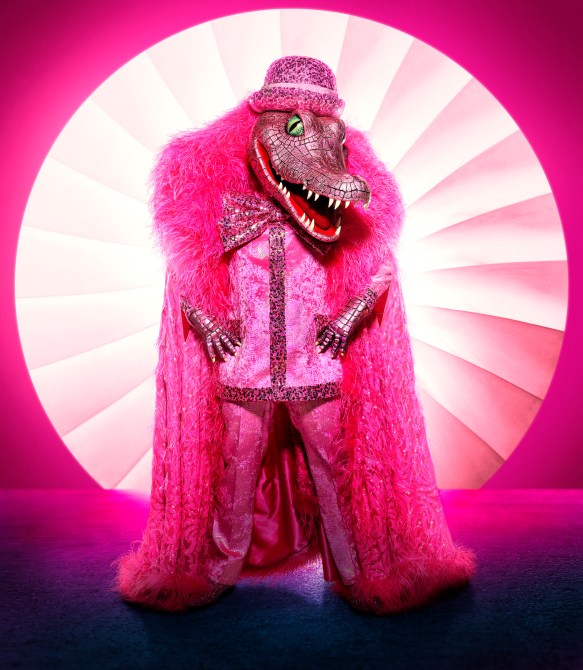 Clues: “My fans are gonna be so excited when they see me on The Masked Singer. Not that I’m all reputation, but I am all reptile.”

A special set of keys reversed my game forever. Tic-Tac-Woah!” 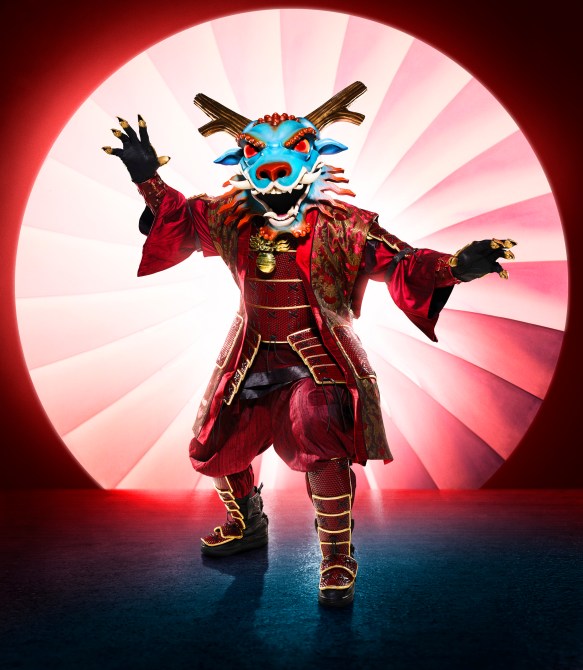 Clues: – “I can relate to the Dragon, because I enjoy getting fired up.”

“I’ve also always been a creative type, so I guess I’m kind of an Imagine Dragon.”

“If you want a hot clue to finding my identity, just look into stocks and bonds.” 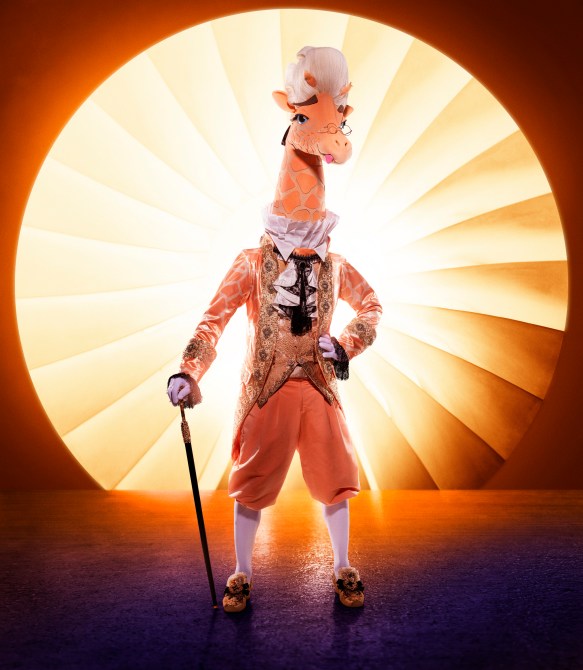 “If you’re looking for a hint to my identity, you should know that I share something in common with a powerful giant.” 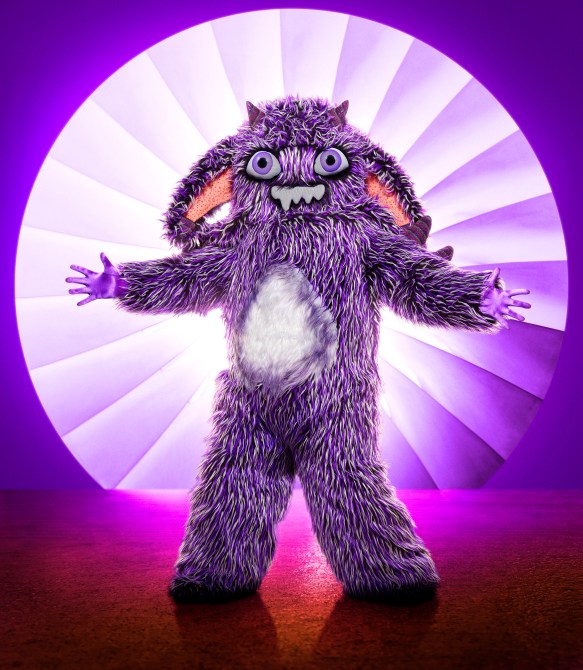 Clue: “I’m the Gremlin because life can be chaotic, so you always have to make time for play. And who’s more playful than a gremlin?”

“Check the Gremlin manual and you’ll see I can thrive when the temperature is a cool 66.5 degrees.” 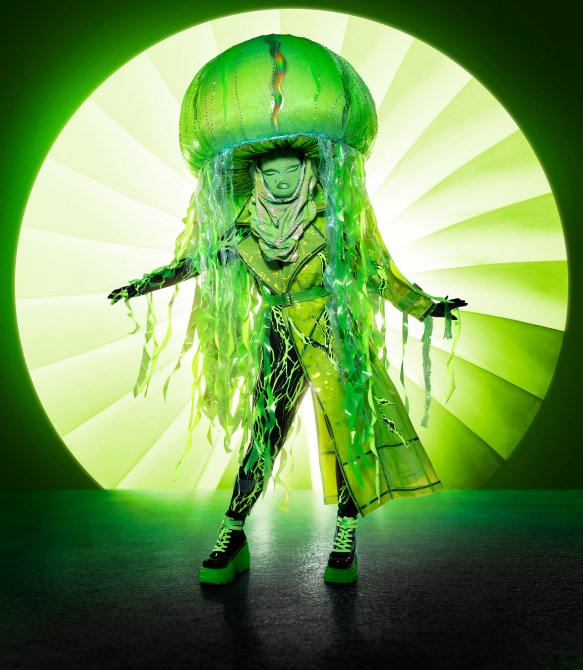 Clue: “Burrr! I assure you that even though I may be cold blooded, I have a warm and glowing flow with H20.”

“You can search the entire ocean for a notion as to who I am.” 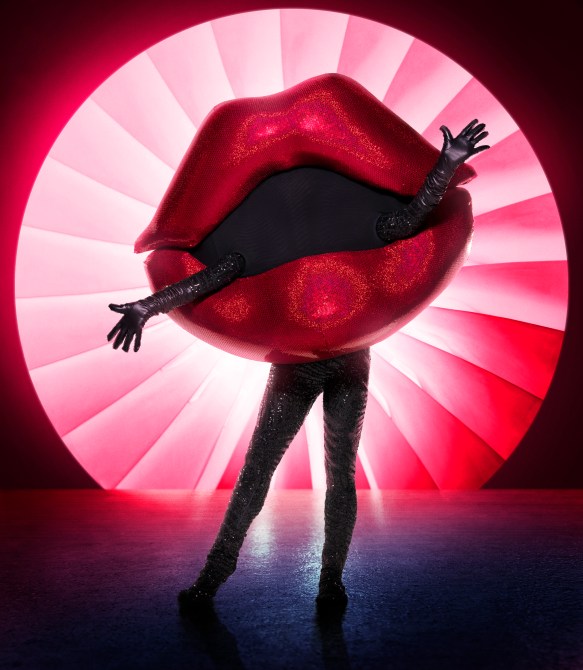 “Trying to infiltrate The Masked Singer stage is like trying to break into a Las Vegas money vault. I can understand why security would be so tight. Who wouldn’t love to pucker up to these juicy lips?”

“If you want a hint about me, I own who I am. I know that my voice can go high, but my dishes go deep.” 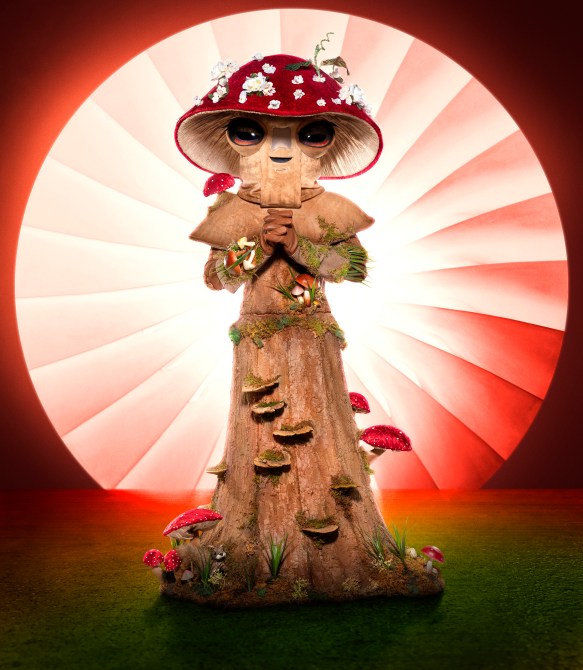 Clue: “Mushrooms are resilient and thrive in all circumstances. Being here has made me realize this show is fertile ground to explore another side of yourself.”

“If you want to know who’s behind my mask, you’ll need to figure out who’s under… My hats.” 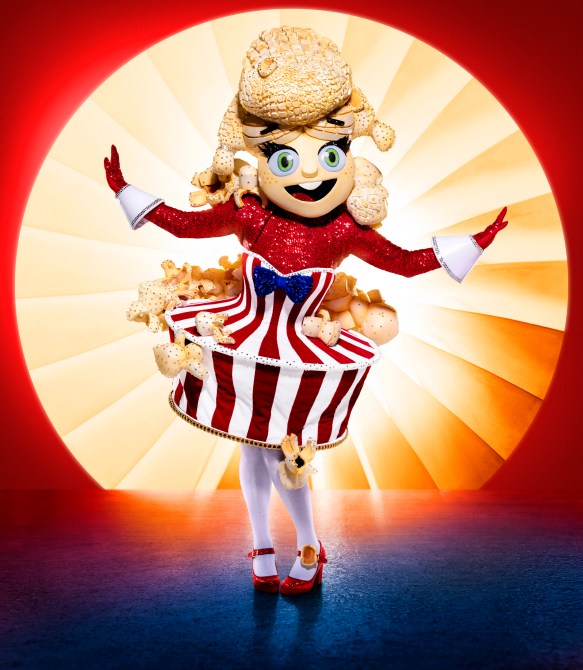 “In 3-D: dynamic, delightful and diva-licious.” 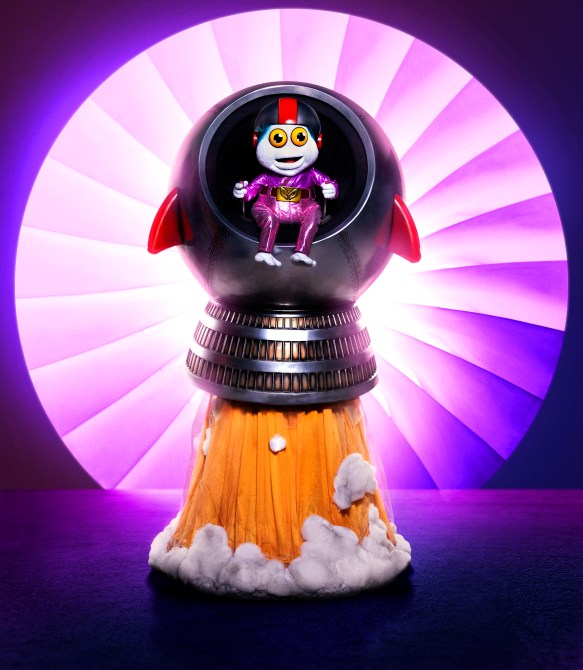 Clue: “I’m a friendly UFO, unless of course, you are my foe. If my competition thinks I look innocent, then, Houston, they’ve got a problem.”

“If you’re looking for a hint about this Baby Alien, all you have to do is look to the stars.” 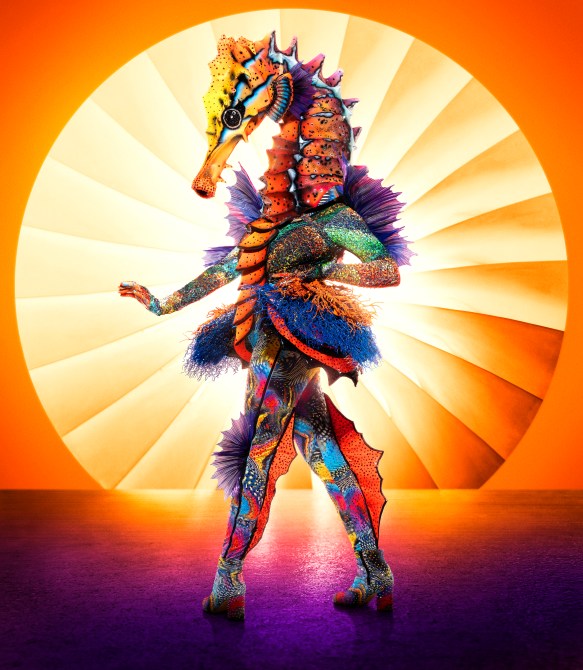 Clue: “Living in the ocean can be dangerous, so it’s always good to find a quiet place to hide. America, you’ll never figure out who I am, even if you try your sea level best.” 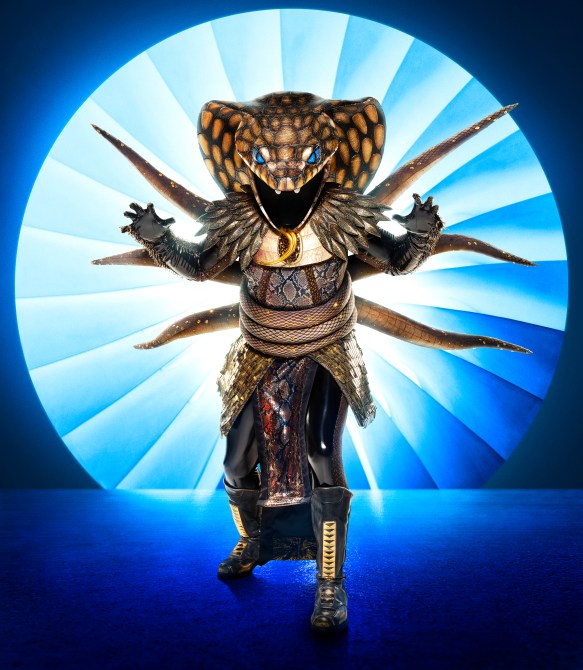 Clue: “If you want to know how I instantly appeared, here’s the prescription number to my identity.” 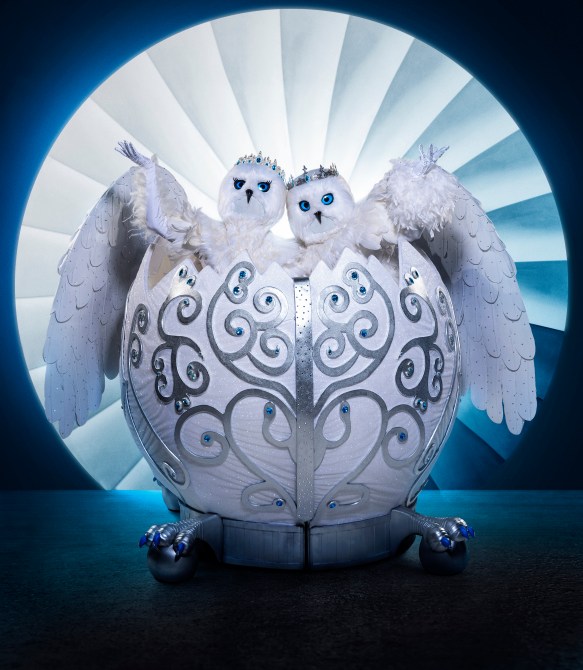 Clue: – “We are the Snow Owls, and we’re ready to ruffle feathers and show everyone it takes two to make a dream come true.”

“We’re here because performing on stage with someone else is always twice as nice. We’re on our hands and knees hoping for victory. After all, we are birds of ‘Pray.'”

“Who is that? You can try and figure out who we are, but as for who is more talented, it’s a tie.” 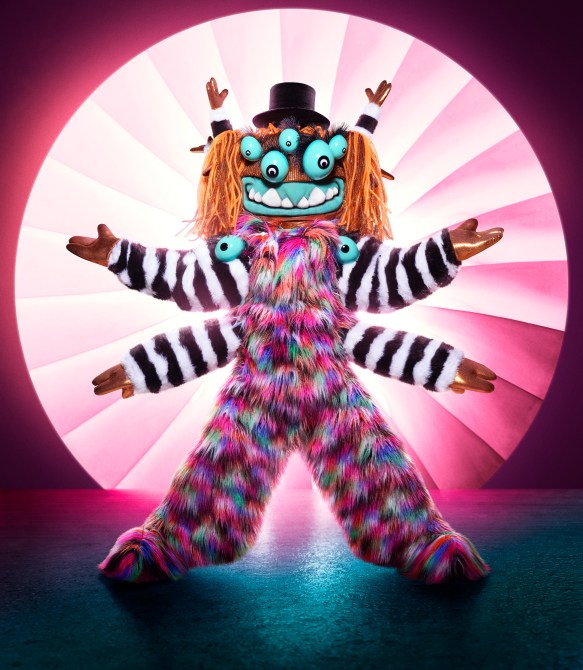 Clue: “The fun part about being a squiggly monster is it’s got a soft side and an edgy side. That means I get to be lovable while also being a wild child.”

“I bet you are crazy to party with, dog!”

“It’s very fitting that I have so many appendages. After all, I’m known for having a lot of hands to latch onto.” 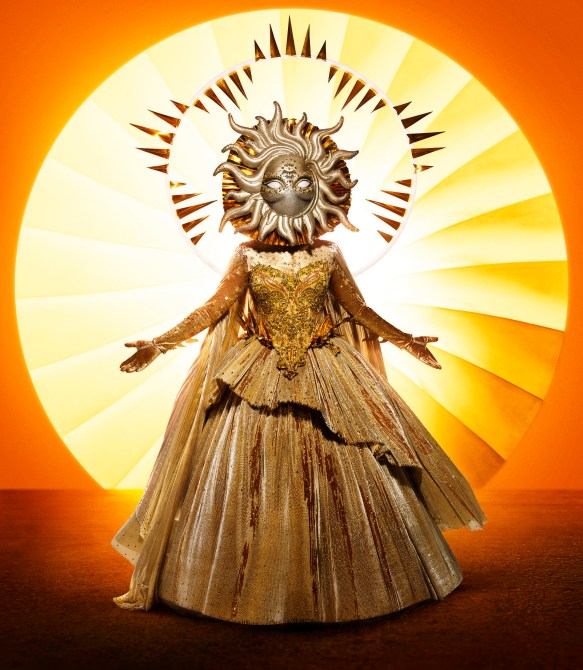 “I’m the Sun because I love to light up the world around me. We’ve all had periods of darkness, but my powerful rays have been known to break through the clouds.”

“If you’re trying to figure out who I am, here’s a hint. This sun knows how to shine like a torch, even during the freezing winter. America, my identity will never dawn on you.” 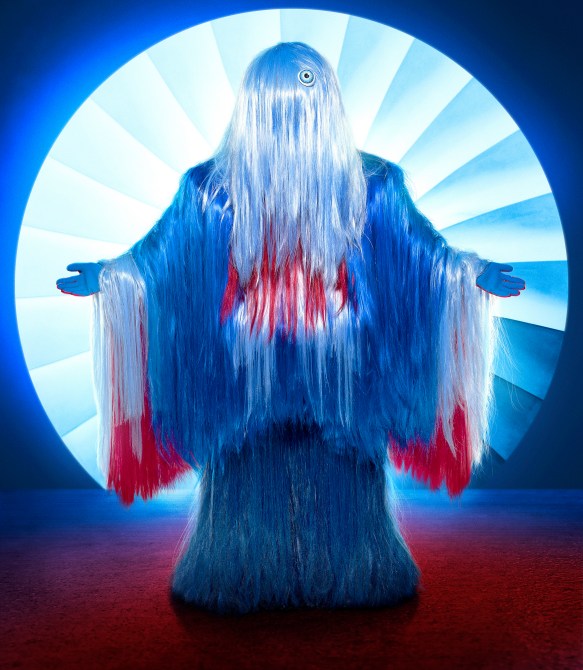 Clue: “Trust me when I say I’m going to win, win, win by the hairs of my chinny-chin-chin.”

“The high level of precautions on this show is unlike anything I’ve ever seen before. Security has everything here on lockdown. They enter secret codes to get through secret passageways. How am I supposed to meet all of my secret admirers?”

“Some might say that my career had a magical start.”

Who are The Masked Singer season 4 judges?

We can expect to see the same judges return—a.k.a. Robin Thicke, Jenny McCarthy, Ken Jeong, and Nicole Scherzinger—to keep things as simple as possible. Host Nick Cannon was also confirmed to make a comeback after apologizing for anti-Semitic remarks on his podcast in July.

The Masked Singer airs live Wednesday nights at 8 p.m. ET on FOX and is available to stream on Hulu.