Action-packed. Therese Marvel advent calendars
and it include holiday surprises like Spider-Man and Guardians of the Galaxy ornaments and a LEGO version of The Avengers tower.

The Marvel Comics, which started in 1961 with publishers Stan Lee, John Nee and C. B. Cebulski, is the home of hundreds of iconic superheroes including Spider-Man, Iron Man, Captain America, the Hulk, Thor, Wolverine, Ant-Man, the Wasp, Black Widow, Hawkeye, Captain Marvel, Black Panther, Doctor Strange and the Scarlet Witch, as well as superhero teams like the X-Men and the Fantastic Four.

Most modern Marvel fans, however, know the franchise from the Marvel Cinematic Universe, which started in 2008 with Iron Man. Since the MCU’s launch, the franchise has released dozens of blockbuster Marvel movies, including Avengers: Endgame, Black Panther, Thor: Ragnarok, Spider-Man: Homecoming and Captain America: Civil War. The MCU has also created several original TV shows, such as Loki, WandaVision and The Falcon and the Winter Soldier, on networks and streaming services like Disney+.

If you’ve never used an advent calendar before, here’s how it works: Each calendar has about 25 paper compartments that fans can open up as they count down the 25 days to Christmas. Inside the compartments are festive surprises like ornaments, mini Christmas books and other holiday-themed trinkets. If you’re someone who can’t wait until December 25, advent calendars are an excellent way to scratch that gift-opening itch and unwrap a new present each day. 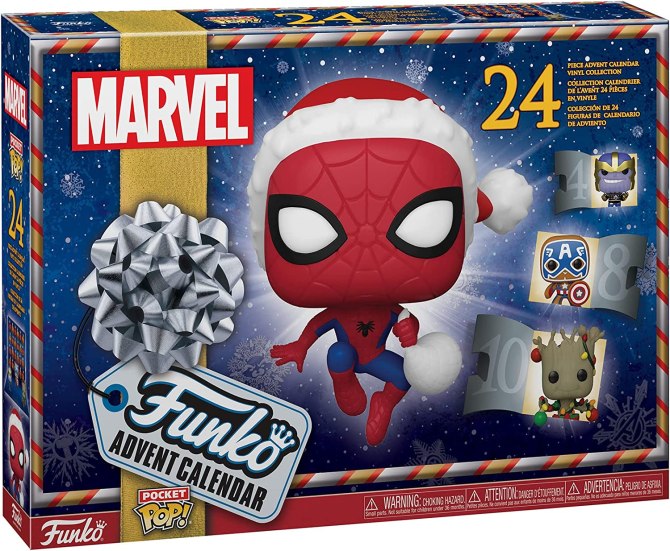 Our spidey senses are tingling with this Marvel Funko Pop! Advent Calendar. The calendar, decorated with snowflakes, stars and the sky of Earth-616, features 24 doors that fans can open as they count down to Christmas. Behind the doors are 24 collectible Funko Pocket Pop! pieces, including Spider-Man in a Santa hat, a Groot Christmas tree with lights and ornaments, and holiday versions of Captain America and Thanos.

The Marvel Funko Pop! Advent Calendar is available on Amazon.

The Guardians of the Galaxy LEGO Advent Calendar 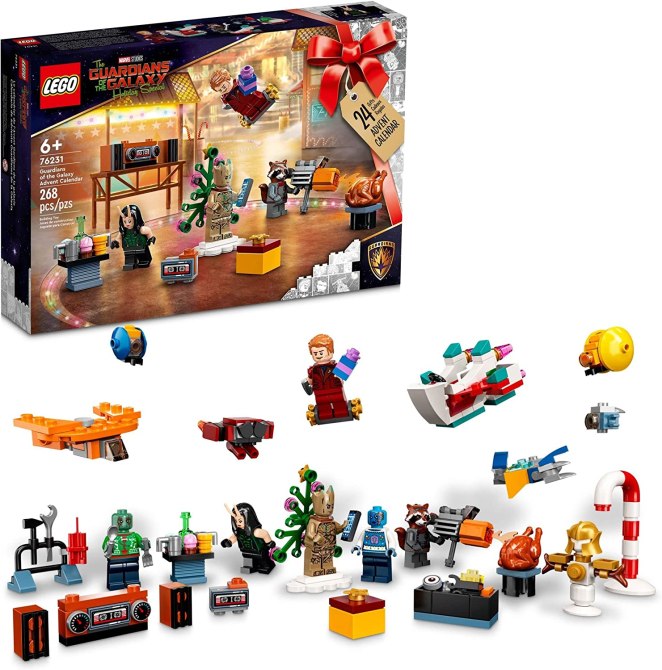 The LEGO Marvel Studios’ Guardians of the Galaxy Advent Calendar is available on Amazon. 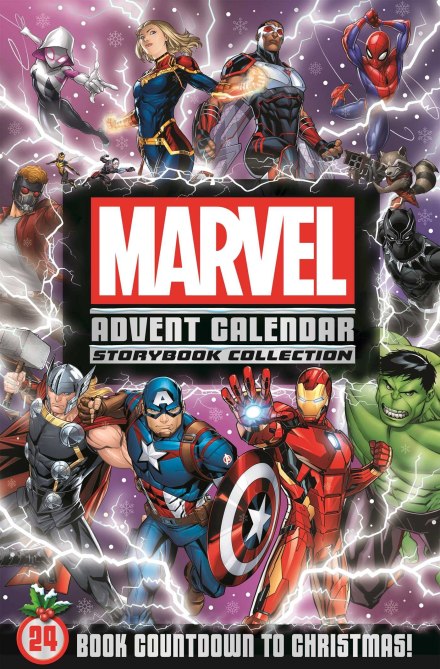 Count down to Christmas with 24 of Marvel’s mightiest heroes. The Marvel: Storybook Collection Advent Calendar includes 24, 24-page paperback books—each individually wrapped, with an epic story about one of the Marvel Universe’s superheroes and how they defeated their own supervillain. The calendar is fashioned with a splash page with dozens of Marvel superheroes, including Spider-Gwen, Captain Marvel, Spider-Man, Rocket Raccoon, Black Panther, Hulk, Iron Man, Captain America, Thor and Star-Lord. 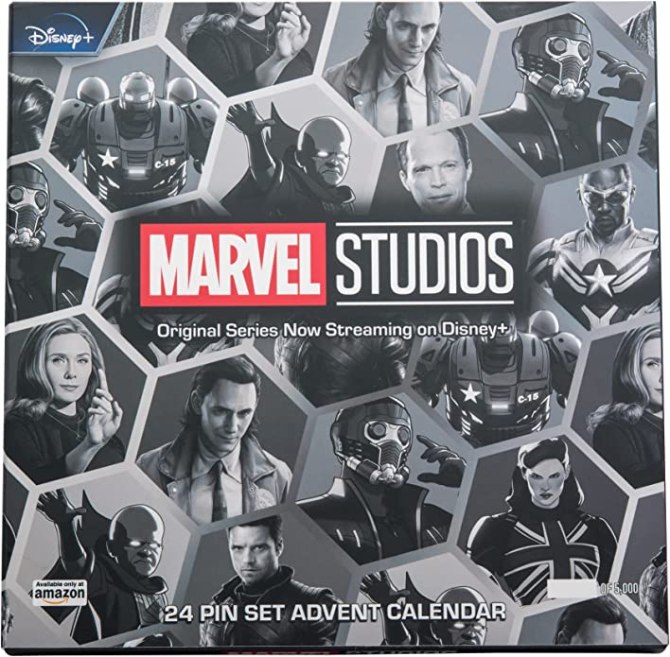 If you can’t get enough of the Marvel Cinematic Universe, this Marvel Studios Advent Calendar is the perfect gift for yourself. The calendar—which is an official Marvel-licensed collectible exclusive on Amazon—includes 24, metal-based, enamel pins themed after fan-favorite superheroes and villains, including the Scarlet Witch, Loki, Agatha, Vision, Falcon, War Machine, Hawkeye, Kate Bishop and Captain Carter. The pins both include cartoon figurines of the characters, as well as symbols that represent each hero, such as Captain America’s shield. 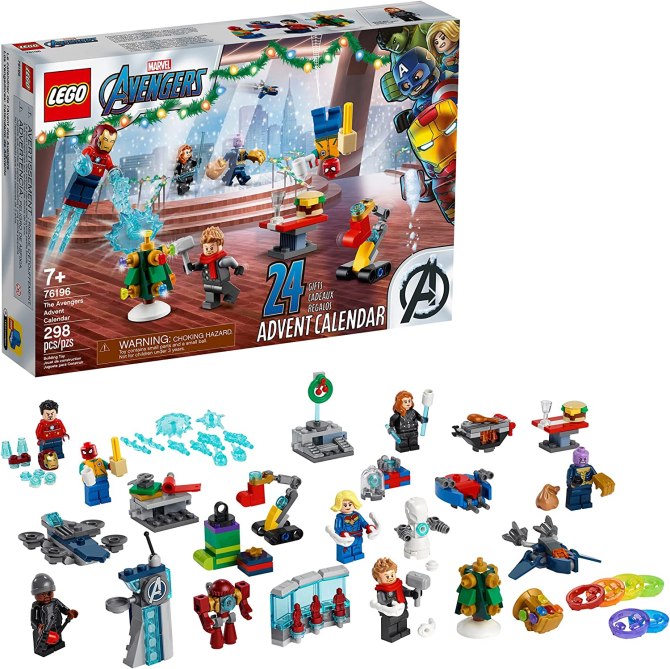 This LEGO Marvel advent calendar includes 24 doors filled with buildable Avengers and Marvel superheroes, like Iron Man, Spider-Man, Black Widow, Thor, Captain Marvel and Nick Fury—as well as supervillain, Thanos).The calendar also includes Marvel vehicles and tools like the Quinjet, the Helicarrier and Spider-Man’s drone, as well as a buildable Avengers tower. The calendar also hints that door 24 features a special “awesome surprise” that may or may not be one of the most powerful objects in the world.

The LEGO Avengers advent calendar
is available on Amazon
. 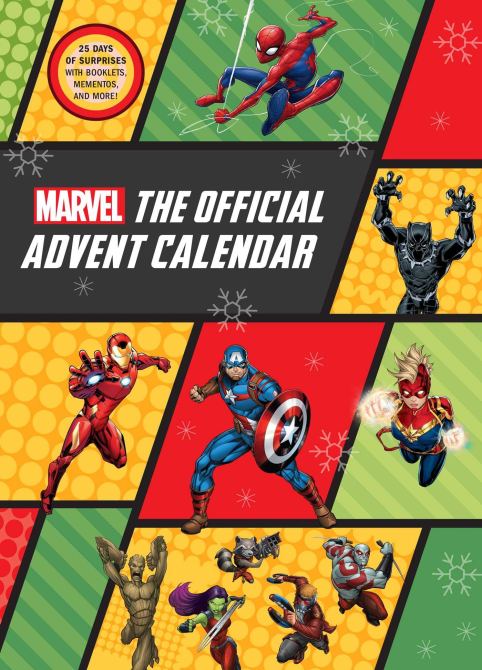 Created Insight Editions, the brand behind collectible books and advent calendars for Friends, Harry Potter, Star Wars and more franchises, Marvel: The Official Advent Calendar features 25 pockets that fans can open as they count down the 25 days to Christmas. Inside the pockets are more than 30 exclusive Marvel-themed mementos such as Spider-Man and Guardians of the Galaxy ornaments, Black Panther and Iron Man buttons and collectible cards featuring iconic Marvel villains like Venom, Green Goblin, Rhino and Dr. Octopus. The calendar is decorated with illustrations of Marvel symbols and characters, as well as photos of fan-favorite superheroes like Spider-Man, Captain Marvel, Iron Man, Groot and Rocket the Raccoon.

Along with Marvel: The Official Advent Calendar
, Insight Editions also has other collectible books and items such as Marvel Eat the Universe: The Official Cookbook—a professional chef-written cookbook featuring iconic dishes from the Marvel universe—and Marvel’s Spider-Man: From Amazing to Spectacular, an art book exploring the 50-plus years of Spider-Man. The book includes exclusive interviews with illustrators, writers and other creators that brought Spider-Man to life, as well as comic book art of the superhero over the year. As for the Marvel cook book, the fan item includes dozens of recipes for Marvel-inspired dishes like Phoenix Hot Chicken, Egg Bowl Storm’s Tournedos, Dazzler’s Glittering Pizza Bagels, Hulk  Smashed Potatoes and Green Goblin Pumpkin Bombs.

Marvel: The Official Advent Calendar is available on Amazon
.

The Marvel movies are available to stream on Disney+. Here’s how to watch them for free.