If you’re planning a trip to Las Vegas next year, you may want to know where to buy Maroon 5 tickets to their Las Vegas M5LV The Residency concerts—and for a discount.

M5LV The Residency is Maroon 5’s first Las Vegas residency after their 12th headlining tour, the 2020 Tour (also known as the 2021 Tour and the 2022 World Tour), which ran from February 2020 December 2022. Maroon 5 announced the M5LV The Residency—which will be held at the Dolby Live at Park MGM in Las Vegas, Nevada, from March 2023 to August 2023—in an Instagram post in September 2022. “M5LV • THE RESIDENCY We’re headed back to Vegas!” the post read.

Maroon 5 consists of six members: Adam Levine, Jesse Carmichael, James Valentine, Matt Flynn, PJ Morton and Sam Farrar. Past members include Ryan Dusick and Mickey Madden. The band debuted in 2002 with their first single, “Harder to Breathe,” from their debut album, “Songs About Jane.” The song peaked at number 18 on the Billboard Hot 100 chart. They scored their first top 10 hit with their next single, “This Love,” which peaked at number 5. Their third single, “She Will Be Loved,” also peaked at number 5. Maroon 5 scored their first number-one song on the Billboard Hot 100 in 2007 with their single, “Makes Me Wonder,” from their sophomore album, “It Won’t Be Soon Before Long.”

Since their debut, Maroon 5 has won three Grammy Awards out of 10 nominations, 8 Billboard Music Awards out of 40 nominations, three American Music Awards and one MTV Video Music Award. “Early on in our careers, people didn’t know what to make of us, so they thought we were a boy band,” Levine told BBC in 2018 about Maroon 5’s start. He continued, “I think people mistook our R&B and soul influences as pop. It’s weird because, to me, the thing that made a boy band a boy band was they didn’t play any instruments and they choreographed their dance moves. If you don’t do that, you’re not a boy band. Even Hanson – they’re a band. They were young, but they were just dudes who played in a band. A boy band is the headsets and the sparkly stuff and all those things.” 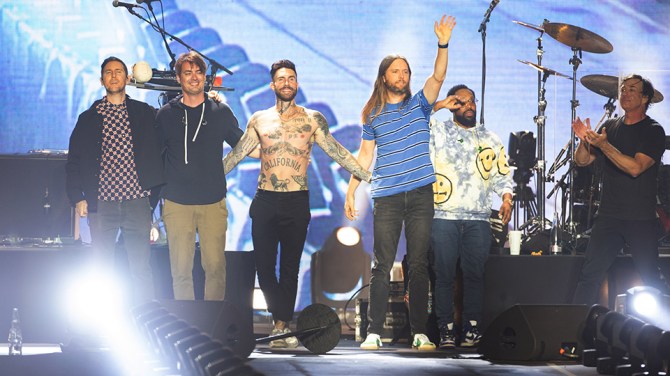 Where to buy Maroon 5 tickets 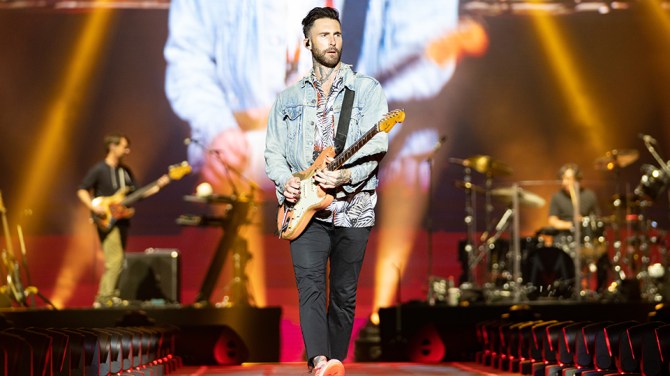 What are Maroon 5’s M5LV The Residency dates?

Where is Maroon 5’s M5LV The Residency?

What is Maroon 5’s M5LV The Residency set list?

Maroon 5’s announcement of their M5LV The Residency concerts in September 2022 came amid rumors lead singer Adam Levine cheated on his wife, Behati Prinsloo. Three days after Adam and Behati announced they were expecting a third child, Instagram model Sumner Stroh posted a TikTok video, in which she claimed she had an affair with Adam and he asked to name his baby after her. “Essentially, I was having an affair with a man who is married to a Victoria’s Secret model,” Sumner said. “At the time, I was young, I was naive. Quite frankly, I feel exploited. I wasn’t in the scene like I am now, so I was definitely very easily manipulated.”

Sumner then shared a screenshot of direct messages between her and Adam. “Seeing u in person I was like…I’m fucked,” Sumner wrote to Adam, who responded, “You are 50 times hotter in person. And so am I.” Sumner continued in the TikTok, “Adam and I were seeing each other for about a year. After I stopped talking to him over a period of months, this is how he came into my life.”

Sumner then explained why she went public with her story. “I wanted to deal with this privately. I never wanted to come forward because obviously I know the implications in doing what I do, making money the way I do and being an Instagram model, so being tied to a story like this, I know the stereotypes,” she said. “I had sent some screenshots to some friends I thought I trusted and one of them had attempted to sell to a tabloid. So here I am.” Sumner captioned the TikTok, “embarrassed I was involved w a man with this utter lack of remorse and respect.”

After she posted the TikTok, Sumner wrote on her Instagram Story: “Aware many people will try to fill in the gaps with many false assumptions. I don’t feel like I’m doing any favors, considering the manner this had to go about. It’s a lot to digest but hopefully, at the very least, the truth being out can do some good.”

Comedian Maryka also accused Adam of cheating on Behati in a series of Instagram Stories on September 20, 2022, where she shared flirty messages and videos between her and the Maroon 5 singer. “Don’t ever apologize for being human,” Adam wrote in a message to Maryka, who responded, “Ahahah but I didn’t. I will definitely take some time off ig though.” Adam wrote back, “Distract yourself by fucking with me! He also sent Maryka a video in which he said, “I’m stupid.” Some messages also include timestamps fromJuly 2022, which is when Adam celebrated his eighth wedding anniversary to Behati.

In another message in July 2022, Adam tells Maryka, “I’m now obsessed with you.” Maryka responds, “Dude aren’t you like married lol.” Adam wrote back that he is but “it’s a bit complicated.” He added, ‘Stuff gets hard and the vid thing didn’t help. I might get away.” In another message, Adam tells Maryka, “Holy fuck. Holy fucking fuck. That body of yours is absurd,” to which Maryka responds, “Next date I’ll be like ‘do you wanna make out with the devil?'” Adam writes back, “Haha. How are you such an hourglass. My god. Seriously fuuuuck.” Maryka then sent a photo of herself to Adam, which he liked and responded with, “I may need to see the booty. Fuuuuuuuuuuuuuuuuck.” Maryka wrote back, “No booty.” Adam responded, “Watching your ass jiggle on that table will permanently scar me but otherwise I’m amazing.” He added, “Fuuuuuuck. I’d do anything for it.” When Maryka laughed at his response, Adam wrote back, “I’d buy it steak dinner and whisper sweet nothings into it. I wanna tattoo my ass now. Nate may come to Maui and tattoo me and surf. I need to put some clouds behind the reaper.”

In another message in June 2022, Adam told Maryka that he and Behati are expecting a third child, a son they plan to name Zea. “That is so fucking weird when you said you were tired I was going to say maybe mercury in retrograde but I never said it. Trippy,” Adam wrote to Maryka, who responded, “No fucking way.” He wrote back, “That shit is weird haha,” to which Maryka responded, “Damn. I’m a qquarius and shit’s getting very weird lately.” Adam then wrote, “Fuckin hell. I’m having another baby. Wifey is pregnant! And I’m having a BOY. And I’m naming him Zea. He will be a bad ass.”

After the Sumner and Maryka’s claims, Adam’s former yoga instructor, Alanna Zabel, who trained him from 2007 to 2010, also accused him of sending flirty messages in an Instagram Story on September 21, 2022. “Long overdue #ExposeAdamLevine. I was his yoga instructor for a few years from 2007 to 2010. He often said that he told his friends that his yoga instructor had the best ass in town and it was cute,” Alanna wrote. “One day he texted me saying, ‘I want to spend the day with you naked.’ I was in the bath but my jealous ex saw it and went into a rate. I assured my ex that I was sure it was meant for Adam’s then girlfriend, Becky, and was a mistake.”

She continued, “I texted Adam to ask if that was the case. Adam didn’t reply … and my ex became violent, breaking my wrist. Massive life changing, destructive moment, and when I told Adam he ignored it, never apologized, removed me from of the upcoming tour and iced me out during one of the most devastating times of my life all from his one flirtatious text.”

In an interview with Cosmopolitan in 2009, three years before he started dating Behati, Adam confessed that he had cheated in past relationships because he didn’t believe monogamy was in his “genetic makeup.” “Instinctively, monogamy is not in our genetic makeup. People cheat. I have cheated. And you know what? There is nothing worse than the feeling of doing it,” he said at the time.

Maroon 5 tickets to the Las Vegas M5LV The Residency are available on StubHub and Vivid Seats. Use code SC15 on Vivid Seats for $15 off.