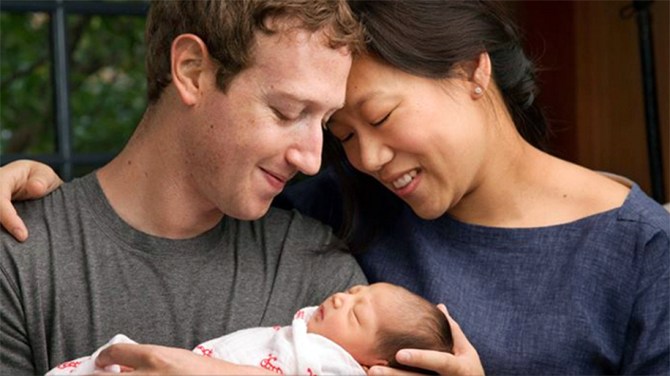 Leave it to Facebook founder Mark Zuckerberg and his wife, Priscilla Chan, to announce the birth of their first child in the most epic way imaginable.

Yes, Zuckerberg and Chan, a pediatrician, did in fact use Facebook to spread the news of their daughter, Max Zuckerberg, but they didn’t accompany it with the usual “mom and baby are doing great!” and a photo of a nondescript hospital room. Instead, they announced they’d donate 99 percent of their Facebook shares to promote human advancement—a total surprise move on the couple’s part.

For those trying to do the math, that’s around $45 billion based on the social network’s current value, making their donation one of the biggest donations in history.

The couple made their announcement through a heartfelt letter to their newborn daughter, referencing the big problems of the world—like poverty, disease, and lack of health care—and ways that their new organization, the Chan Zuckerberg Initiative, will achieve eradicating them.

“Our initial areas of focus will be personalized learning, curing disease, connecting people, and building strong communities,” the couple wrote. Lofty goals, for sure. The new parents also revealed a “great responsibility” to make the world better for Max.

“We wish you a life filled with the same love, hope, and joy you give us,” the proud parents wrote. “We can’t wait to see what you bring to this world.”

Everyone: a collective awwwwww. And we can’t wait to see what the prodigy of two Harvard-trained billionaires does either. Ostensibly, some world-changing things.