Hargitay is the daughter of bodybuilder Mickey Hargitay and Playboy playmate and actress Jayne Mansfield. The couple met at the Mae West Revue in 1956, where Mickey was performing. They married in 1958 and starred in four movies together:Will Success Spoil Rock Hunter?, The Loves of Hercules, Promises! Promises! and L’Amore Primitivo. However, the marriage didn’t last. By 1964, the couple had divorced.

Jayne and Mickey also weren’t each other’s first spouses. Before Jayne, Mickey was married to Mary Birge from 1948 to 1956. After his divorce from Jayne, Mickey, who has starred in an episode of Law & Order: SVU, was married to actress Ellen Siano from 1967 until his death in 2006. Jayne, for her part, was married to soldier Paul Mansfield from 1950 to 1958. She married director Matt Climber in 1965 and divorced him in 1966.

In 1967, Jayne was killed in a car crash along with her boyfriend, Sam Brody, and their driver, Ronald B. Harrison. Mariska and her brothers were also in the car at the time, but survived. In an interview with People in 2018, Mariska opened up about the loss her mom at an early age. “The way I’ve lived with loss is to lean into it,” Mariska said. “As the saying goes, the only way out is through. In my life, certainly I’ve tried to avoid pain, loss, feeling things. But I’ve learned instead to real­ly lean into it, because sooner or later you have to pay the piper. I’m not saying it’s easy, and it certainly hasn’t been for me. There’s been a lot of darkness. But on the other side things can be so bright.” 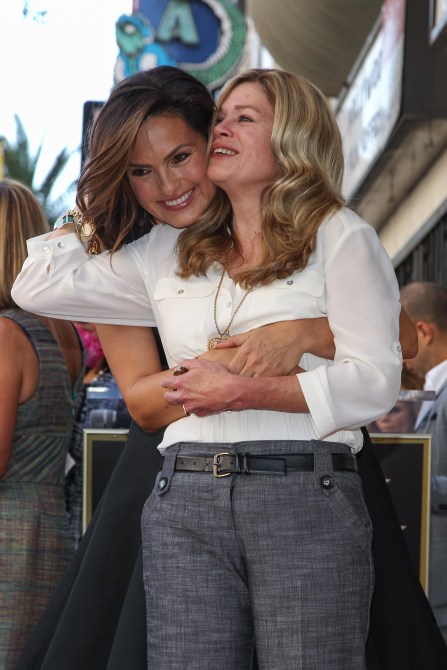 Jayne Marie (pictured above) is Mariska’s half-sister from her mom Jayne Mansfield’s marriage to Paul Mansfield. The couple were married from 1950 to 1958 and had one child. Jayne Marie was born on November 8, 1950, and, as her name suggests, she was named after her and Mariska’s late mother. Like her mother, Jayne Marie was also a Playboy Playmate. In July 1976, Jayne Marie became the first daughter of a Playmate to be featured in Playboy, and since then, only one other daughter of a Playmate has modeled for the magazine. Jayne Marie and her mother were also featured in Playboy’s 1988 100 Beautiful Women special issue.

Like her parents and half-sister, Jayne Marie has also acted in several films, including 1978’s Olly, Olly, Oxen Free and 2003’s Blond in Hollywood. Of Jayne’s five children, only Jayne Marie attended her mother’s funeral on July 3, 1967, as the other kids were under the age of 10. In 1970, Jayne Marie married Barry Lang in Las Vegas. The couple had one son together before their divorce.

Zoltan is one of Mariska’s two full older brothers. He was born on August 1, 1960 and is the second child of Jayne Mansfield and Mickey Hargitay, who married in 1958 and divorced in 1964. Zoltan also worked in Hollywood, though he isn’t an actor like his sister. Instead, Zoltan worked as a carpenter on films like 1997’s Retroactive, and 1994’s T-Force, Reflections on a Crime and Shrunken Heads. Zoltan was with Mariska and their older brother, Mickey Jr., when their mother died in a car crash in 1967.

Mickey Jr. is the eldest of the Hargitay siblings and the first child of Jayne Mansfield and Mickey Hargitay. He was born on December 21, 1958, and is named after his late father. Like his parents and sister, Mickey Jr. has done some acting. He played a baby in 1962’s It Happens in Athens when he was 4 years old. He’s also appeared as himself in several documentaries and non-fiction series, such as 1968’s The Wild Wild World of Jayne Mansfield, a documentary about his mom, and the TV shows New York, New York and The Merv Griffin Show.

Tony is Mariska’s half younger brother from her mom Jayne Mansfield’s marriage to director Matt Climber. The couple married in 1965 and divorced in 1966. Tony was born on October 18, 1965. Like the other Hargitay siblings, Tony, whose full name is Antonio Raphael Ottaviano Cimber, also works in Hollywood as an actor and director. He’s worked on shows like 2019’s The Original Ladies of Wrestling, 1986’s GLOW: Gorgeous Ladies of Wrestling and 2000’s Mystery: Mysteries of Cathedrals. His father, Matt Climber, was the co-creator of GLOW.

Tina is Mariska’s half-sister and her eldest sibling. Tina is the daughter of Mariska’s father, Mickey Hargitay, and his first wife, Mary Birge. The couple were married from 1948 to 1956. Not much is known about Tina, but she and Mariska remain close. Tina was among several of the Law & Order star’s siblings who attended a ceremony for her Hollywood Walk of Fame Star in 2013.