She may be Detective Olivia Benson to Law & Order fans, but to Mariska Hargitay‘s kids, she’s just known as mom. Hargitay, who has starred on Law & Order: Special Victims Unit for the past 20-plus years, is the mother of three children with her husband, Peter Hermann.

Hermann, who is best known for his role as Charles Brooks on Younger, met Hargitay on the set of Law & Order: Special Victims Unit in 2002 when he made his debut as Trevor Langan, a defense lawyer, in season 2 of the series. Hermann went on to star as Trevor for more than 15 years and more than 30 episodes, but the real takeaway from his time on Law & Order was meeting his wife.

In a 2015 interview with InStyle, Hargitay revealed that she and Hermann bonded on the set of Law & Order over religion, and their first date was at a church. “I just about passed out when I saw him there,” Hargitay told InStyle at the time. “I thought, that’s my husband.” Two years after their first date, the couple married at the Unitarian Historical Chapel in Santa Barbara on August 28, 2004. Hargitay wore a pale pink Carolina Herrera gown with her husband’s initials and their wedding date embroidered into the lining.

Two years after their wedding, Hargitay and Hermann welcomed their first child and adopted two more kids soon after. Ahead is what we know about Mariska Hargitay’s kids and her family with Peter Hermann. 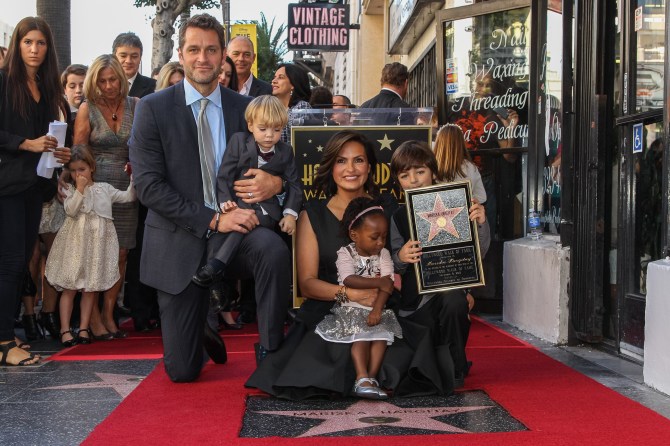 August, who is Hargitay and Hermann’s first son and their only biological child, was born on June 28, 2006, when the Law & Order actress was 42. According to People, “August” has been a name in Hermann’s family for more than 200 years, while “Miklos” was the name of Hargitay’s late father. “Friedrich” came from the name of Hermann’s grandfather.

In an interview with TV Guide in 2006, Hargitay recalled the first time she heard August cry.”When I first heard August’s cry, that’s when I lost it,” she said at the time. “You have so much love that you didn’t even know about.” The magazine also reported that August was a week late and, though Hargitay hoped for a natural delivery, she had a C-section. “I’m not a fan of surgery…but I wanted a healthy baby,” she said.

Hargitay told People in 2018 about how becoming a mother changed her. “The thing that’s made me a better parent is my kids,” she said. “Because they taught me to really listen. My husband is my North Star, and my kids are my teachers.”

She continued, “Our family is so perfect, or at least perfect for me. Together we’re just this whole, happy, joyful, chaotic, crazy unit. I’ve never known anything that was more right.”

After starting the adoption process in 2010, which included meeting with an adoption lawyer and completing home inspections, Hargitay and Hermann adopted their daughter, Amaya Josephine, in 2011. Hargitay told Good Housekeeping in 2012 that she chose to adopt because she and Herman always “envisioned” a “big family” but didn’t know if she could become pregnant again. “August wanted siblings, and Peter and I both envisioned this big family because we both come from that. Plus, we just had so much love to give,” she said. She continued, “I was really letting the chips fall as they might, because I do think so much is up to God. I always said, ‘I don’t know how this is going to end up. I don’t know if I’m going to get pregnant and have twins. I don’t know…if somebody’s going to leave a baby on my doorstep.’ But I really did think that down the line, Peter and I would adopt a child. That was always part of the plan.”

In the interview, Hargitay also recalled Amaya’s birth mother telling her, “‘I know this is right. You are this baby’s mother,'” the first time the Law & Order actress met her daughter.

Hargitay also told Good Housekeeping of a time she went to Thailand and India as a kid and saw other children without parents, which is when she first thought about adoption. “I remember being in Thailand and India when I was 9 or 10 and seeing kids alone in the street and thinking, Where are their moms?” she recalled. “They were so amazingly resourceful and soulful and smart. And somewhere inside of me, even so young; I had that maternal instinct, I remember thinking, I want to take them all home!”

Soon after Hargitay and Hermann brought home Amaya, they received a call from their adoption lawyer, telling them a baby boy, who was born two months premature, was available for adoption. That baby was their second son Andrew. “I don’t really know what to say about it, other than it was a no-brainer. Peter and I both thought, Let’s do it! I’m in! It was like…a miracle. And I don’t use that word lightly. I’ve never made a bigger decision so quickly. The whole thing happened in a total of two days,” Hargitay told Good Housekeeping. She and Hermann named their son Andrew after a good friend who had recently passed away at the time.

Though Hermann and Hargitay welcomed two adopted children soon after the other, the actress told Good Housekeeping that the process wasn’t easy. “There were several cases that didn’t work out. A lot of different kinds of complications. Then, after disappointments, came the big hope; which ended up being dashed,” she said. “But while it may be ironic, the hardest disappointment was also the greatest moment, in terms of what it means to help build a family.”

Law & Order: Special Victims Unit airs Thursdays at 8 p.m. on NBC. Here’s how to watch it for free.