If they don’t know already, fans may be surprised to learn that Mariska Hargitay‘s husband is Peter Hermann, a.k.a. Charles Brooks from Younger. But how did they meet? And what’s their relationship like? Well, we answer those questions ahead.

As fans are aware, Hargitay is best known for her role as Detective Olivia Benson (now Captain) on Law & Order: Special Victims Unit. Hargitay, who made her debut on the Law & Order spinoff in September 199, has starred on the show for more than 22 seasons and even won an Emmy for Outstanding Lead Actress in a Drama series for the role in 2006. (She became the first main cast member from any Law & Order show to win an Emmy.)

With her name so synonymous with Detective Benson’s, it’s hard to imagine Hargitay’s life outside of Law & Order. Ahead is what we know about Mariska Hargitay’s husband, Peter Hermann, and how they met. 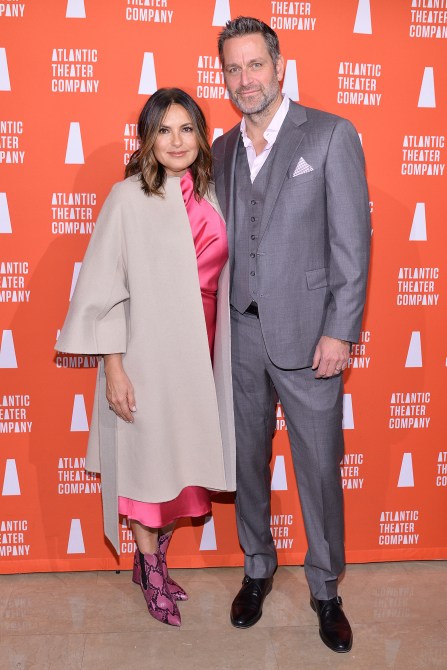 Who is Mariska Hargitay’s husband?

Mariska Hargitay’s husband, Peter Hermann, is also an actor, who has starred in shows like Sex and the City, All My Children, 30 Rock, The Good Wife and Elementary. He was a main cast member on the soap opera Guiding Light, in which he played Dr. Michael Burke, from 1997 to 1998. Hermann also has a recurring role on the crime drama Blue Bloods. But most fans may recognize him as Charles Brooks, a.k.a. the head of Empirical Press and Liza’s love interest, on Younger. Hermann has also starred in both Law & Order and Law & Order: Special Victims Unit, which brings us to how he and Hargitay met…

How did Mariska Hargitay and Peter Hermann meet?

Hargitay and Hermann met he starred as Trevor Langan, a defense attorney, on season 2 of Law & Order: Special Victims Unit in 2002. Hermann played the role for more than 15 years and more than 30 episodes. His most recent episode as Trevor was in 2019.

In a 2015 interview with InStyle, Hargitay revealed that she met Hermann on the set of SVU and he asked her out on their first date after they finished filming that day. Where was the date, you ask? Well, Hargitay revealed that her first date with Hermann was at church, which he thought of after the couple had been talking about religion on set.”I just about passed out when I saw him there,” Hargitay told InStyle at the time. “I thought, that’s my husband.”

Hargitay told People at the time that she realized Hermann was her husband while they were at church. “I just started sobbing. Peter thought I was crying because I was so moved by the service,” she said. “No, it was because I was just overwhelmed, realizing he was the one.” In a 2019 interview with Today, Hargitay explained why she was so overcome with emotion during her and Hermann’s first date. “I cried because I was feeling something that I’d never felt before, but I kind of knew what it was. When you’re a little girl, your parents and your grandparents and everyone goes, ‘When you’re in love, you’ll know.’ And I did,” she said.

Hermann recalled to Page Six in 2019 a moment when he and Hargitay were walking to his apartment on West 36th Street when they encountered a herd of rats. “The only thing I could say to this woman I loved, and whom I would eventually marry, was, ‘New York!'” he said.

After two years of dating, Hargitay and Hermann married at the Unitarian Historical Chapel in Santa Barbara on August 28, 2004. Hargitay wore a pale pink Carolina Herrera gown with her husband’s initials and their wedding date embroidered into the lining. The couple welcomed their first son, August, in 2006, when Hargitay was 42. The pair went on to adopt two more children, daughter Amaya and son Andrew.

“August wanted siblings, and Peter and I both envisioned this big family because we both come from that. Plus, we just had so much love to give,” Hargitay told Good Housekeeping in 2014.

Law & Order: Special Victims Unit airs Thursdays at 8 p.m. on NBC. Here’s how to watch it for free.