She may be known to SVU fans as Detective Olivia Benson, but to Mariska Hargitay’s father, she was just his daughter. Mariska, who has starred on Law & Order: Special Victims Unit since 1999, is the daughter of bodybuilder Mickey Hargitay and Playboy Playmate Jayne Mansfield.

Jayne and Mickey—who are also parents to Mariska’s older brothers, Zoltan Hargitay and Mickey Hargitay Jr.—met in 1956 at the Mae West Revue, where Mickey was performing at the time. They married in 1958, and the two went on to star in four movies togethe—Will Success Spoil Rock Hunter?, The Loves of Hercules, Promises! Promises! and L’Amore Primitivo—before their eventual divorce in 1964.

So that’s the Hargitay family in a nutshell. But who is Mariska Hargitay’s father, Mickey Hargitay, and who did he play in SVU? Read on to find out. 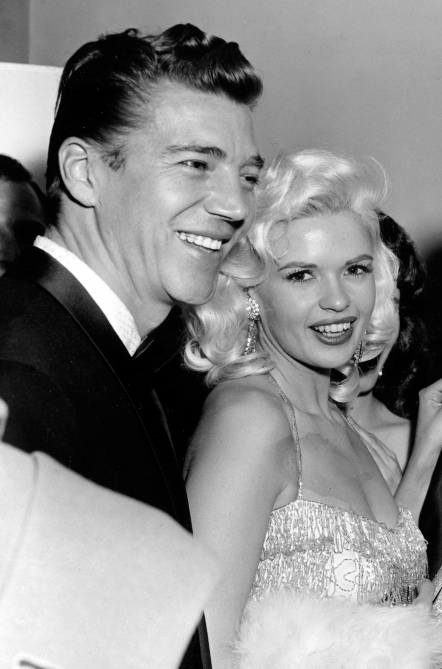 Mariska Hargitay’s father is actor and bodybuilder Mickey Hargitay. Mickey, whose real name is Miklós, was born in Budapest, Hungary, on January 6, 1926. He moved to the United States in 1947, where he eventually became a citizen. Mickey, who is one of four children, was an athlete his whole life. In 1946, he placed first in the Middle European championship for speed skating at the 500 and 1,500 meter races. He placed second in the 5,000 meter race. He was also a football player and an underground fighter during World War II.

After he moved the U.S., he met his first wife, acrobat Mary Birge. He worked as a plumber and a carpenter and also performed in an acrobatic act with Birge, which led him to begin bodybuilding after seeing a magazine cover of Steve Reeves, who was famous for his role as Hercules. In 1955, Mickey became the National Amateur Body Builders’ Association’s Mr. Universe. After his divorce from Birge, he joined Mae West’s muscleman revue at New York’s Latin Quarter where he met Jayne.

Throughout his life, Mickey starred in more than a dozen movies, including Revenge of the Gladiators and Stranger in Sacramento. In 2003, Mickey played his final role as a grandfather in Law & Order: Special Victims Unit, which starred his daughter, Mariska. In the episode, titled “Control,” Mickey played a man who witnessed the aftermath of a brutal assault on a subway station escalator. The episode also sees Mariska’s character interviewing him.

Mickey died at the age of 80 on September 14, 2006, from multiple myeloma, a cancer of plasma cells. Mariska’s older brother, Mickey Jr., is named after her father. In an interview with Good Housekeeping in 2012, Mariska revealed the advice from her father that she still carries with her to this day. “I’ll take inspiration and information from wherever I can get it, whether that’s from my character, from my husband, or from my dad, who always said, ‘Mariska, you can learn from anyone and everyone,’” Hargitay said at the time. “‘From people who are older than you and people who are younger than you.’”

Law & Order is available to stream on Peacock.