Law & Order fans have shipped Detective Olivia Benson and Detective Elliot Stabler since season 1, but what about the actors who play them? Have Mariska Hargitay and Christopher Meloni ever dated? Sorry to disappoint, SVU fans, but it looks like Hargitay and Meloni’s on-screen chemistry stays on screen.

Hargitay and Meloni made their debut as Detective Benson and Detective Stabler with the premiere of Law & Order: Special Victims Unit, a spinoff of Law & Order, in September 1999. Since then, the show has run for more than 20 seasons and won more than 30 Emmys, including one Outstanding Lead Actress in a Drama Series for Hargitay in 2006. (She became the first main cast member from any Law & Order show to win an Emmy.)

Though Hargitay remains on SVU, Meloni left the series in May 2011 after 12 seasons. However, that wasn’t the last time Law & Order fans saw Detective Stabler. Meloni returned to the role in his own Law & Order spinoff, Law & Order: Organize Crime, in April 2021. The premiere of the spinof saw Stabler and Benson reunite in a crossover between Organized Crime and SVU. But back to Hargitay and Meloni. Did Mariska Hargitay and Christopher Meloni ever date? Read on for what we know. 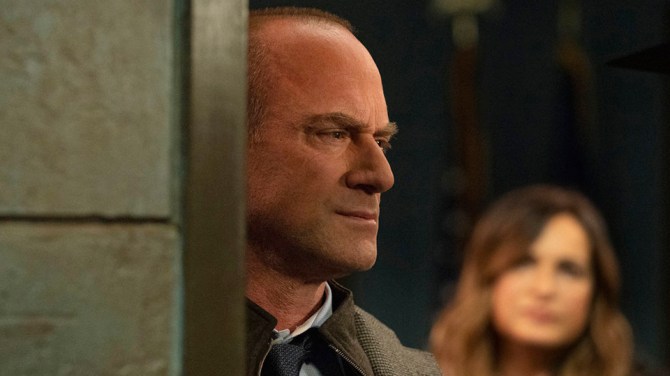 Sorry, Law & Order fans, but Mariska Hargitay and Christopher Meloni never dated and never will. Like Benson and Stabler, Hargitay and Meloni are better off as friends and coworkers. There’s a simple reason they didn’t date: Meloni was never single while filming Law & Order. He married his wife, Doris Sherman Williams (with whom he has two kids), in 1995—four years before Law & Order: SVU premiered. Hargitay, for her part, married her husband, Peter Hermann, in 2004. The couple, who met on season 3 of Law & Order in which Herman guest starred as Trevor Langan, share three kids.

Though Hargitay and Meloni never dated, they are close friends. For Valentine’s Day 2017, Hargitay posted a photo of Meloni kissing her on the cheek. “And then that happened… Just when I thought Valentine’s Day was over,” she captioned the picture. In an interview with People in 2021, Meloni recalled his immediate connection with Hargitay during their screen test for Law & Order. “It happened at the screen test,” Meloni said.  “[We both] walked into the screen test, me telling her a story, and we get up onstage in front of all the suits, and we’re just so engaged.”

Hargitay added, “I walked in, saw him, and I went, ‘That guy. That’s the guy.’ It went deep, very fast. We both knew that it was something big. I won’t say that I fully understood it, but I knew that meeting him was important and life-changing. My father, my husband, [Law & Order creator] Dick Wolf and Chris are the four pillar men in my life. And that happened early.”

Hargitay went on to tell People that Meloni’s status as a married man made their on-screen chemistry even better .”And it made me feel even safer with him, as opposed to: ‘Great guy — but single,'” she said. “Or ‘Great guy — except for his romantic life.’ Instead, he’s this man who is as solid as a rock, and who is that rock in his relationship,” she adds. “And I got to lean on it when I needed to. It was like family.”

After Meloni left SVU in 2011, he and Hargitay stayed in touch, which made their 2021 reunion that much easier. “There was so much shorthand between us, which all goes back to the trust we have,” Hargitay said. “He’s always made me feel like I could just jump off the ledge, the cliff, the bridge, and he would catch me, in so many ways, whether it was comedy or acting or friendship.”