These days, award show fashion feels like a distant memory. With most shows going virtual due to pandemic precautions (which, of course, are important and necessary) it feels like I’ll never get to watch a pre-show red carpet again. That said, this year’s Golden Globes did have a few live presenters, and Margot Robbie’s look was so good, I’m willing to give her her very own Best Dressed list.

With the nominees forced to stay home during the night’s celebrations, it was up to the Golden Globes’ hosts and presenters to provide all the fashion fodder. For this reason, the Globes rounded up some of Hollywood’s most notable fashion players to present, from Kate Hudson to Cynthia Erivo to our very own Margot Robbie.

In the past, Robbie has won two Golden Globes: Best Supporting Actress in a Motion Picture for Bombshell in 2020, and Best Actress In a Musical or Comedy Motion Picture for I, Tonya in 2018. Tonight, though, she took to the stage to present an award to someone else—although in my opinion, she was still the big winner of the night. Her look deserved all the awards! 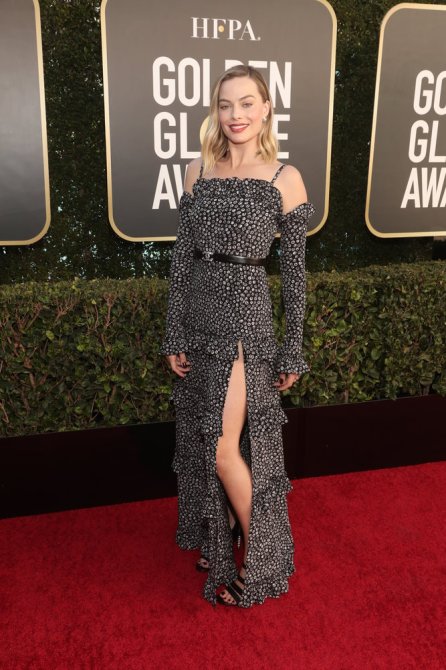 Always impeccably dressed, Robbie arrived at the Globes wearing a dress from the Chanel Spring/Summer 2021 runway. The look was a black gown with ditsy white floral print that gave a polka-dotty look from far away, and the silhouette was especially unique, with a tiered skirt, high leg slit, black belt to cinch the waist, ruffled neckline and both spaghetti straps and off-the-shoulder long sleeves that kind of remind me of the arm socks I used to wear from Limited Too in my youth. But, like, in a chic way.

Her glam featured super minimal eye makeup and dewy, and her iconic bouncy blonde locks were worn short in casual waves. Her side part may not be Gen Z-approved, but it looked beautiful! You can’t do those dreamy waves justice without a side part and hair placed on one shoulder just so, so I’m willing to let it slide.

Pun tied to last year’s win intended, Robbie looked like a total bombshell. And good thing, too, because her 2020 Golden Globes look was kind of a letdown. Her beaded Chanel bustier—which, apparently, took 225 hours to make—didn’t really do it for me, especially paired with a simple white satin skirt. I don’t want to be a hater because she’s served so many fire looks in the past, but that one just didn’t ~wow~ me. You know?

That said, it looks like Robbie has redeemed herself with this year’s slay and I couldn’t be happier about it. Long live my fave blonde fashionista!