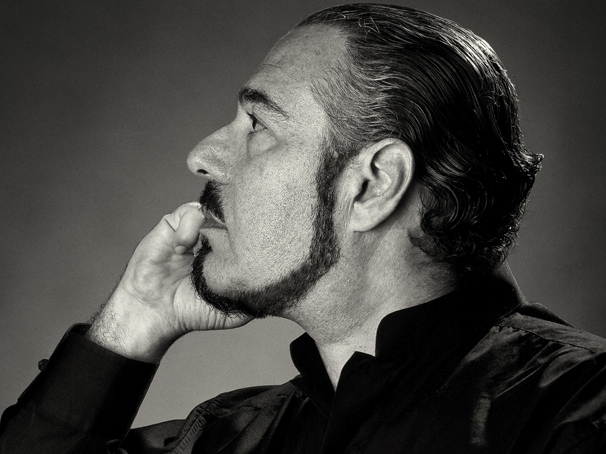 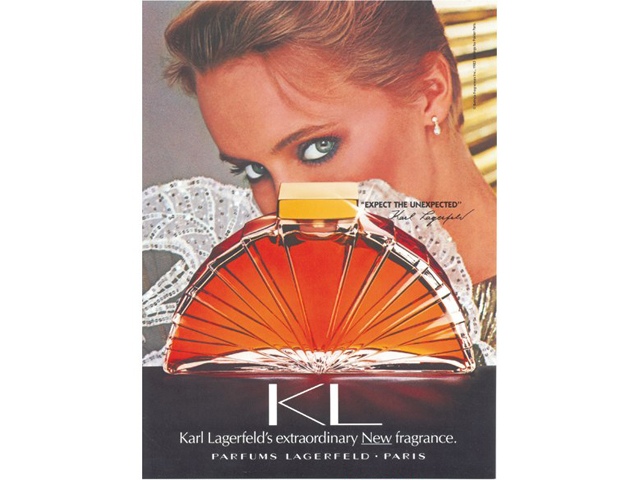 I’ve seen that one, it’s beautiful. What was the process like with Karl?
I’d already worked with Karl on a men’s fragrance called Lagerfeld. It was for Chloe, where he was originally, before he left and started his own brand. Karl was always using fans in his fashion shows—the models often had very large fans covered with the fabric of the dress. He also had a collection of fans when I went to his home. He called one day, this was the catalyst, and said he was interested in the 18th century at the moment, and his home had been super contemporary, but he got rid of everything and made it all French 18th century. He’d been to Versailles, which he considered the epitome of French 18th century design, architecture, everything, and then he saw the Concord, which was at that point a new plane—so essentially he saw the best of the 18th century, and the best of the 20th century at the  moment when the plane flew over the palace. He said, “That’s what I want—the best of the past, the best of the present, the best of the future.”
I started thinking about fans, and the only connection I had to them was with “Gone with the Wind,” you know southern belles on plantation verandas ventilating themselves on sweltering summer days. I started doing research on fans in the 18th century because fans have been used all over the world, and realized that the fan was indeed a weapon of flirtation. The woman can hide her face, can flirt with the man, can open and close it to gesticulate. I thought, what a great symbol for this fragrance. So that’s what inspired that design, and Karl loved it.
Do you yourself wear a fragrance and, if so, did the design of the bottle guide your decision at all?
Yes! [Laughs]. For many years I wore Lagerfeld for men because I designed the bottle, but that was a long long time ago. I’m kind of in a rut. I should be trying different things but I’m lazy. I keep trying things and go back to the one I wear. It’s a fragrance by Boucheron, which is a French jeweler, and it’s the original Boucheron for men. The top of it looks like a blue cabochon stone, and because its a jewelers, the cap looks like a ring, like a jewel. My wife and I actually both wear the same men’s fragrance.
What was it like assembling the book and looking back over your life’s work?
It was a huge catharsis. I’d been thinking about doing a book for several years. I ended up doing several things with the book based on the title “Glamour Icons”. It was not only a retrospective of my career, because I realized that glamour has played such a part in my life—my wife, if you Google her, is a very beautiful, glamorous star—and the bottles I do are glamorous, and we have a life and friends that are fun and glamorous. So I started doing research on glamour and realized what I wanted to do was show the reader that the definition of glamour has, in each decade, changed based on the society of the time. So war, depression, Hollywood movies—these things influence the definition of glamour. So I also chose bottles created in each decade that personified that definition of glamour, and there’s a big chapter on that, “100 Years of Fragrance Bottles,” and within that I go decade by decade.
Richard Avedon said that when he looked back at “Dovima with the Elephants,” he wished he’d shot it so her sash was blowing in the wind. Do you have a “Dovima,” a bottle you look back at now and think, “Oh, maybe I would tweak that, or adjust this?”
Yes I do, but fortunately not a lot. The reason I would make changes on a few is less about design and more about production. Sometimes after you work with the marketing people they give it to production people to work with the glass companies to get it produced, so even though I’m involved in the initial process, by the time it is being produced, I’m not involved. Sometimes these people want to be cost-saving heroes and alter the design without telling me, so when it comes out I’m disappointed. So there are one or two of those. Not many, fortunately.
“Glamour Icons” is available for $59.50 at Amazon.com.