A look from Marc Jacobs Spring 2014

Marc Jacobs brought New York Fashion Week to its official close last night, hosting a runway show inside the Lexington Avenue Armory that everyone in the fashion world is referring to as “shipwrecked.” And while that was certainly true given the mast of a ship, black sand, cigarette butts, beach chairs, half-buried, broken bottles, humid air, and (most notably) that the show opened with the musical theme from “Jaws”—we noticed another, perhaps more interesting reference throughout the collection: Tim Burton’s”Beetlejuice.”

Read below to find out why!

1. The hair and makeup.
The asymmetrical, rag-tag haircuts all the models sported down the runway directly recalled the weird ‘do the star of the 1988 film, Winona Ryder, sports as Lydia Deetz. Additionally, their makeup—minimal color on the face aside from dark brows—recalls her trademark look.

2. The grass.
The sparkling artificial turf Jacobs installed at the Armory is a sleeker version of the incredibly fake grass that sets the scene for Beetlejuice’s world.

MORE: See All The Playful Looks From Marc by Marc Jacobs Spring 2014

3. The stairs.
As you may recall, Lydia has a fairly epic scene that takes place on the steps inside her possessed home; Jacobs had the models begin their walks at the top of a similar staircase.

All of Marc’s models walked the runway yesterday in flat shoes. From loafers to sandals to moccasins, there was not a lifted sole in sight. This seems remarkably similar to Lydia’s personal style, which stuck to shoes of a similar sort.

5. The clothes.
Some of the gowns in Jacobs’ collection recalled the all-black, layered, lace-tinged looks favored by Lydia. 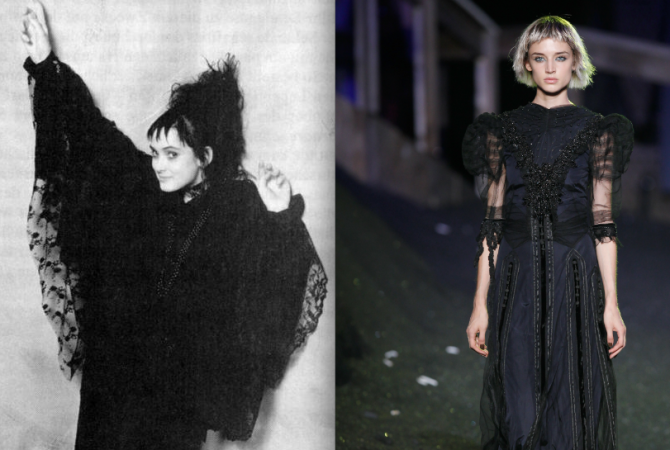 6. The stripes.
Some of the pieces Jacobs walked down the runway seemed to have a decidedly Beetlejuice-esque inspiration to their striped patterns. 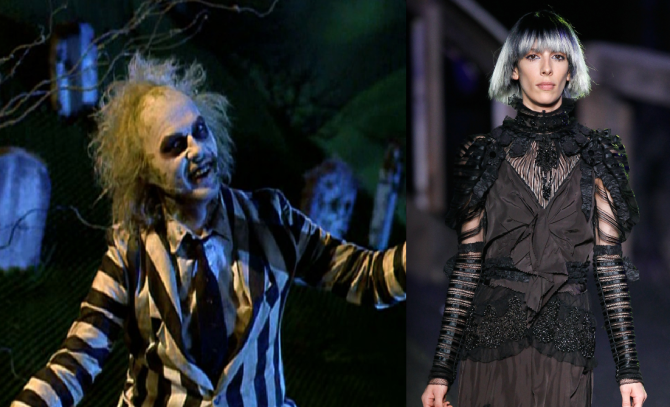 7. Winona was actually at the show.
The breakthrough star of “Beetlejuice” was invited to sit front row at Jacob’s show. Naturally, she sat alongside fellow 1990s goddess Christina Ricci. 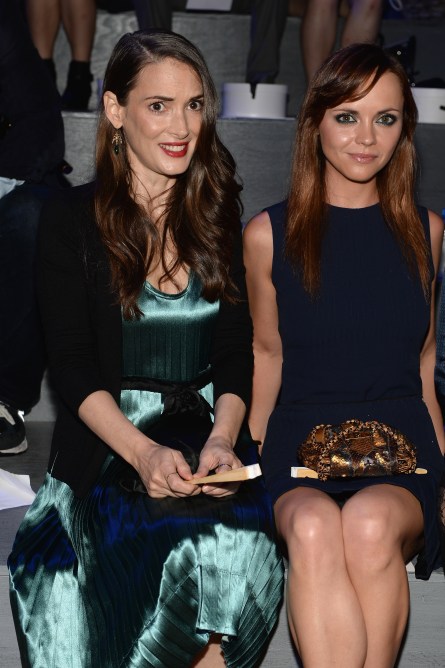