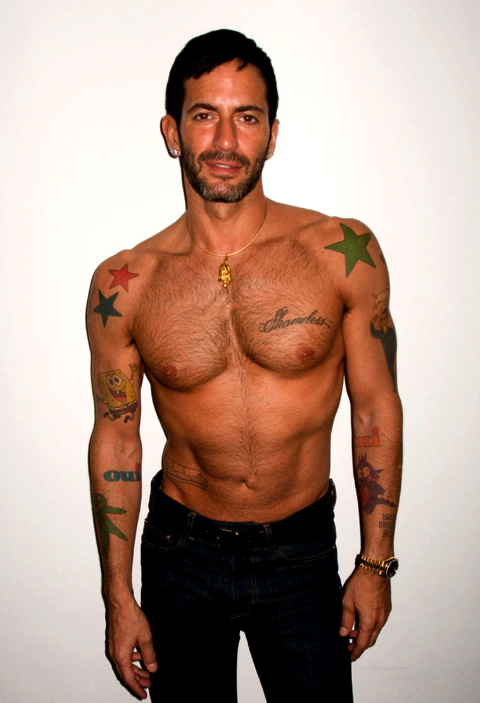 Today, fashion designer and visionary Marc Jacobs turns 50. It’s hard to believe, given his near-perfect physique and incredibly active life—which includes helming his own labels and storied French brand Louis Vuitton, as well as high-profile side gigs like acting as Diet Coke’s creative director, as well as actual acting with a role in the upcoming thrilled “Disconnect.” So, in order to properly celebrate half a century of the phenomenon that is Marc Jacobs, we decided to break down his life by the numbers.

33: Number of tattoos
Jacobs is a body art aficionado, and many of his 33 tattoos were done by famed artist Scott Campbell. His notable ink includes a couch on his abdomen, SpongeBob SquarePants, a red M&M, the word “Shameless,” the word “Perfect” in capital letters on his right wrist as a testament to a mantra he picked up in rehab (which is “I’m a perfect being in a perfect world where everything that happens benefits me completely.”) He has plans for a 34th, which will reportedly be another character from “South Park” (yes, he has one of those already.)

1981: The year he entered Parsons
During his time at the prestigious Parsons School of Design, Jacobs won the Perry Ellis Gold Thimble Award in 1984, which was certainly foreshadowing of one of his most notable jobs.

26: Age when he landed his first huge break
Jacobs was a mere 26 years old when the immense buzz surrounding his design skills landed him a prestigious gig: the head of design at Perry Ellis. After wowing critics at first, the folks at the label turned on him a few years later.

1992: The year he showcased the infamous grunge collection
In 1992, Jacobs created a collection for Perry Ellis that still remains one of the most talked about to this day. The grunge-inspired line featured flannel shirts, thermals, layers, Doc Martens, and skullcaps. Critics were wowed—but the higher-ups dismissed him soon after.

9: Number of CFDA Awards
Jacobs has won a total of 9 awards from the Council of Fashion Designers of America. His first was the Womenswear Designer of the Year Award for Perry Ellis in 1992, and his most recent was the Geoffrey Beene Lifetime Achievement Award in 2011.

1997: The year of Louis Vuitton
Jacobs scored a big gig in 1997, becoming Louis Vuitton‘s creative director. He created the company’s first ready-to-wear line, and is credited with single-handedly revitalizing the brand, and notably collaborated with popular artists like Stephen Sprouse and Takashi Murakami, bringing Vuitton into the 21st Century.

$65,000: Cost of stolen clothing
Days before Jacobs was meant to showcase his Spring 2012 collection at press previews in London, all his samples were stolen. Luckily, the main collection was safe and sound in New York, so all was ultimately well.

2: Number of rehab stints
Jacobs’ first noted trip to rehab was in 1999 for substance abuse issues. Then, in 2007, he checked himself in again. “According to the experts, such a relapse isn’t uncommon. Thankfully, Marc recognized the problem himself and chose to deal with it. Obviously, our prayers are with him,” his partner Mark Duffy said in a statement. This January, he opened up about still battling his demons, stating: “I wouldn’t say I’m 100% sober. I’m not perfect. Maybe I’ve had a glass of wine, or a glass of whisky, or a joint, or other things…”

239: Number of stand-along stores
In 2011, there were 239 Marc Jacobs stores in 60 countries—and the number has grown since then.

1: Number of ex-boyfriends with the “Marc Jacobs” logo tattooed on his arm (again, that we know of!)
We’re sure Jason Preston isn’t the only one in Jacobs’ history who inked the designer’s iconic logo on his arm, but he’s the only one we have on record.

1: Number of engagements
In 2011, it seemed Jacobs was finally settling down, as reports swirled that  he was engaged to Brazilian ad exec and man about town Lorenzo Martone. Alas, they ultimately split up—but have remained close friends. They were frequently photographed at beaches all around the world toting Hermes Birkins—aka, your typical beach bag.

1: Big Dior rumor
After John Galliano was dismissed from his post as Dior’s creative director due to a drunken anti-Semitic rant, rumors began to circulate in late 2011 that Jacobs would be taking on the role. Despite denying it multiple times, the press still fueled the fire—until Raf Simons ultimately assumed the post.