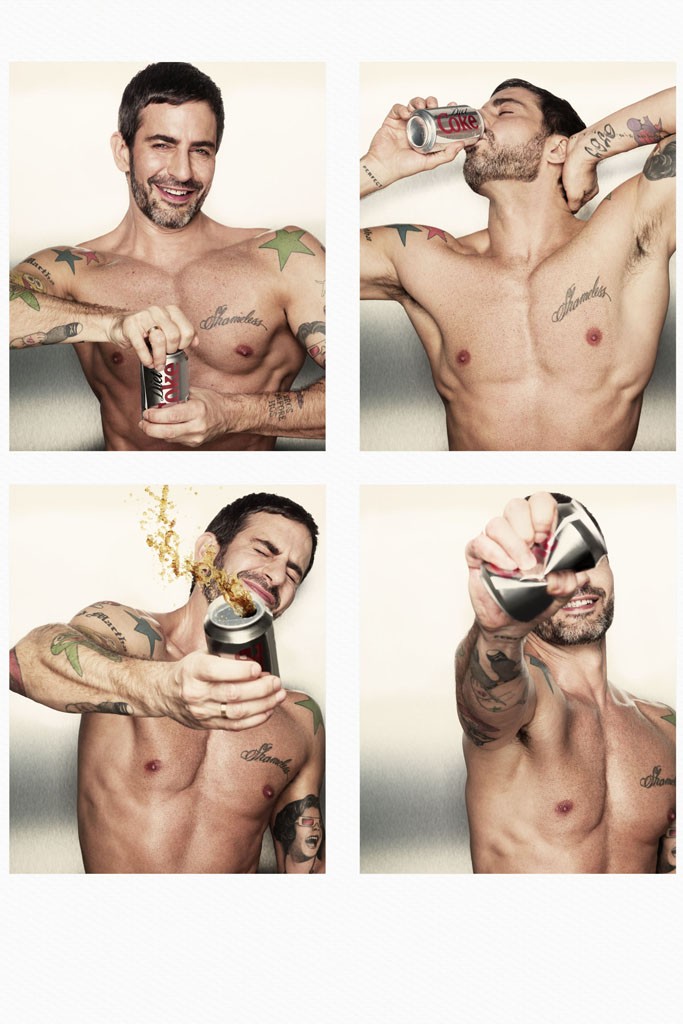 By now, you may have heard the news that Marc Jacobs has been appointed as the new creative director of Diet Coke. Let that sink in for a second. Okay, ready? Let’s move on.

WWD is reporting that—apart from providing general creative input—the position will entail Jacobs creating “whimsical, feminine” packaging for the brand as it celebrates its 30th anniversary in Europe, as well as stripping down in a photo booth and posing in pin-up-style ads—shirtless, naturally.

While the partnership isn’t terribly shocking—Diet Coke has a history of tapping fashion folks for various roles, including Karl Lagerfeld and Jean Paul Gaultier—we couldn’t help but wonder if there’s something sort of flip about the ways in which brands are increasingly using the “creative director” appellation. Typically, being a creative director is a highly hands-on position that requires rigorous work and creative energy—not to mention constant attention to everything your brand sends out the door.

To us, it’s confusing when already-rich and famous faces choose to do extra work for companies outside their respective categories—Jacobs, for example, already runs two of his own labels in addition to Louis Vuitton at age 49. That said, busy celebrities are increasingly taking on these “creative director” roles. BlackBerry recently tapped Alicia Keys to be its creative director, for example, while Lady Gaga was appointed creative director of Polaroid in 2011.

To better understand why more and more famous folks are accepting creative director positions—and if it’s worthwhile—we took some questions to Kristi McCormick, a casting director and founder of agency Matchbook Company, who offered some insight.

StyleCaster: What exactly is a creative director?

Kristi McCormick: A creative director makes all decisions when it comes to a brand’s visual identity, communication, and concept. This includes advertising campaigns, packaging, in-store displays, copy, window displays—anything that the consumer sees before purchase.

What are the benefits of having a celebrity creative direct a company, and why would the celebrities want to do it?
Approaching a celebrity or notable designer to make creative decisions on a brand outside their category is very attractive.  Performers and actors are usually paid for use of their name and face (or music) to help sell a brand.  Now, they’re being asked to craft the actual campaign they’ll appear in—their opinions are valued and executed. They get to choose the photographers and directors they want to work with.

They get to select the music for the TV spot. They get to weigh in on copy.  It’s more about the business role of the celebrity in the campaign than the money.  In the case of Marc Jacobs, he’s being asked to add his fashion and design expertise to one of the most notable beverage brands in the world. How many other beverage brands are asking him to do this?

Typically, people in creative director roles are hardworking and extremely present. How much work do you think these celebrities really do?
Yes, a creative director should be present and hardworking, so celebrities shouldn’t accept the job if they can;t fulfill certain responsibilities. I remember when Drew Barrymore was booked as creative director and model for Cover Girl, and I was told she attended meetings, participated in conference calls, offered creative concepts, and really contributed to the overall campaign. Hence, her success was shown by her multi-year renewal.

How do the companies target specific celebrities?
There are teams of people doing market research for companies in order to identify what movies and TV shows their customers are watching, what music they’re listening to, what sports icons are the most relevant to them. The brands I work with have a “hit list” of notable stars they want to attract, book, or work with in some way.  It’s my job to report on this hit list, as well as offer additional talent ideas for the brands to engage.

If the brand is open to offering a creative role to the celebrity, this makes my casting much more interesting to Hollywood. I also strongly believe that including a celebrity in the creative direction of campaign reduces the “ask” price for the celebrity.

In your opinion, is this a smart move for Marc Jacobs? (or Gaga for Polaroid, or any other star?)
This is a very worthwhile move for Jacobs, and other notables who are contracted for an expanded role [at a brand]. Here, Marc can show his ability to lead and collaborate in a business outside his own.