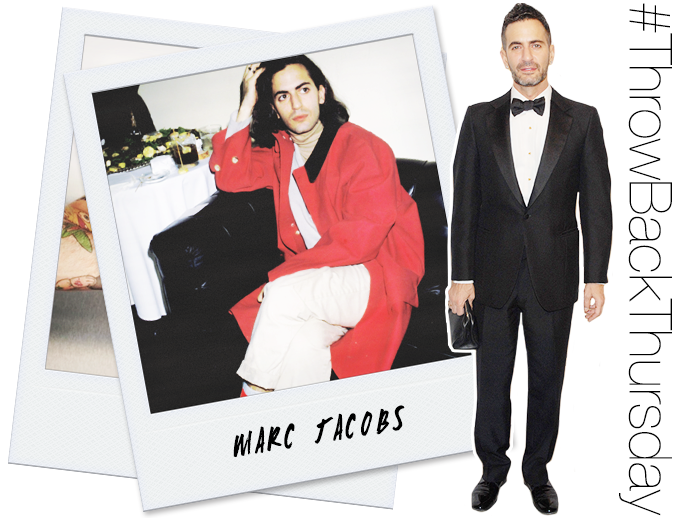 Is your mind blown yet? That photo on the left is a 27-year-old Marc Jacobs in New York in 1990, at the opening night party for the Johnny Depp movie “Cry Baby.” And, at right, it’s modern-times Marc, looking as fit and debonaire as ever in a slim-cut tuxedo. Can’t believe they’re the same person? Neither can we!

But the truth is that MJ’s appearance has seen a number of evolutions throughout the years. Before the 50-year-old became the often semi-naked, incredibly in-shape version of himself we see now—largely the result of a very strict fitness regimen and a gluten-free, vegetable-based diet—his weight ballooned up and down (partially due to his suffering from Crohn’s Disease). Additionally, when he first broke onto the fashion scene (around the time this photo was taken), he had long, luscious locks that he wore mostly untamed.

His appearance isn’t all that’s changed: Marc’s relatively recent dedication to strict regimens has also resulted in more order in his life. In the 90s, his shows were infamous for running as much as three hours behind schedule; now his most recent showing in New York started three minutes early, and there were a hefty number of people turned away from the show because they arrived just a couple of minutes late. People really do change!

Of course, with his recent exit from his top spot at Louis Vuitton, we assume there are more iterations of Marc to come. We look forward to meeting them all!