She may star in its reboot, but Maia Reficco has been a superfan of Pretty Little Liars long before she knew there would be a spinoff.

Reficco is one of the five main cast members on Pretty Little Liars: Original Sin, HBO Max’s new Pretty Little Liars reboot about a group of teenage girls stalked by an anonymous serial killer named “A” who is set on holding them—and their mothers—responsible for a mysterious secret from their past. But years before she became a part of the Pretty Little Liars Cinematic Universe herself, Reficco—who plays Noa, a high school track star fresh out of juvie—was one of the show’s millions of fans.

Reficco loved Pretty Little Liars so much that she wrote two of the characters’ names on her bed in white nail polish. “It’s still there in my mom’s house,” she says. The characters are Aria Montgomery and Ezra Fitz, the main couple of Pretty Little Liars who met in season 1 when Ezra was Aria’s high school English teacher. While Reficco, like many viewers, was a fan of the couple when she first watched Pretty Little Liars, she made clear that she doesn’t support them now.  “It was a couple that now in hindsight I don’t support anymore. But as an impressionable viewer, I was a 13/14-year-old kid who was buying into the narrative I was being fed,” Reficco says. “Understanding what I was supporting, I now obviously don’t agree with it at all.”

When you’re a teenager, entertainment is such key component to feeling less alone and to finding who you are.

Despite her criticism of the original Pretty Little Liars,  Reficco still considers her role in Original Sin—which is the first Latinx liar in the franchise’s four shows—to be a dream come true. “There’s never been a Latina liar. Having grown up watching the shows, getting to be the first Latina liar was with me to my very core,” Reficco says. “I felt so incredibly isolated culturally when I was growing up. I never saw somebody like me from where I’m from, and so that in itself is incredibly moving.” Reficco also credits the original Pretty Little Liars for molding her into who she is. “At the same time, it’s a show I loved. It shaped me a lot,” she says. “When you’re a teenager, entertainment is such key component to feeling less alone and to finding who you are. Just getting to be a part of something that meant so much to me already and flipping it and bringing my own little spin to it and making other people feel seen is just insane.”

While Reficco is a fan of the original Pretty Little Liars, she promises that Original Sin—which has been described by fans as scarier and darker than the OG—is “night and day” from the original. “It has a completely different DNA. It was never our intention in any capacity to copy the original and to compete against it because it was so iconic,” Reficco says. “We would never try to do that. What the creators brilliantly did was re-imagine such an iconic universe and flipped it on its head and based it on ‘90s horror slasher films. From there, it started a whole new different story. It’s definitely night and day from the original. We pay homage to it and lay love to how iconic it was but in our own way, with a 2022 lens.”

Ahead, Reficco talked to StyleCaster about meeting her “first girl crush” Lucy Hale, the guessing game of “A” on set, and the original Pretty Little Liars cast member she wants to guest star on Original Sin. 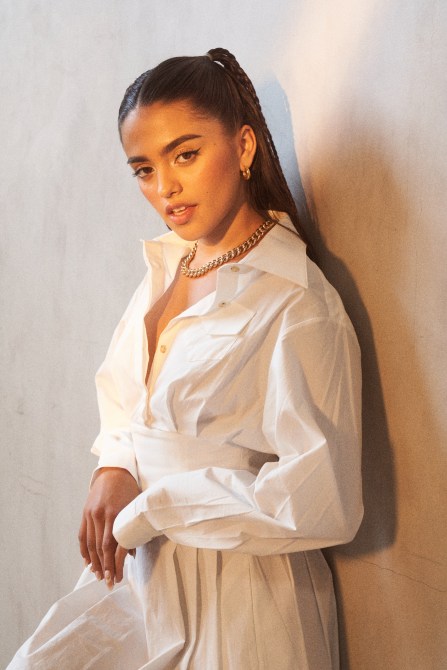 On how she messed up in her audition

“I remember getting that first email and freaking out because I am such a fan of the original that I was just like, ‘Whether I get it or not, I cannot wait to watch this.’It’s pretty funny because I sent in a tape with a mess-up in there and the producers were like, ‘We love that you left that in.’ I was like, ‘Wait what? That wasn’t intentional.’ I got a line wrong or something and I got mad. I was like, ‘Maia, come on!’ But there was something about my reaction that then I brought into Noa. It was fun to start my journey with Noa with something so real that came from a place of just me being myself.”

On learning Noa was Latina

“I remember my character breakdown. She was Latina originally. I didn’t really know much about any of the other characters. I just knew a very vague, generalized description of Noa. It was the best possible surprise, I would say, to be honest. The reason why I do what I do and I am an artist in any capacity is to tell a story and convey a message that moves me and my reality and potentially help anybody. The fact that it was a mostly diverse cast filled with people of color, with four out of five liars, makes me more excited to tell this story in itself.”

On the first time she met Lucy Hale

“I met Lucy at our panel. She was incredible and moderated our panel for our premiere. It was so surreal. I had to leave the greenroom without saying bye to her because I just couldn’t. She was my favorite. She was the first girl crush I ever had. She means so much to me in a weird way. But it just felt extremely surreal. I had to step out and be like, ‘Wait, what is life? What is life? What is life?’ All of the girls knew I was really nervous because I loved Lucy as a kid. Bailee [Madison] came up to me like, ‘Are you OK?’ And I’m like, ‘I’m fine! I’m fine! I’m fine!’ Because clearly she did occupy a huge part of my life, as ironic as that sounds.”

It was never our intention in any capacity to copy the original and to compete against it because it was so iconic,

On the advice Lucy Hale gave the cast

“She was so sweet. Obviously, she’s familiar with the situation we’re in. She is a bit of a mentor to all of us. She took on that role and gave us great advice, which was. as a whole, to enjoy the ride and be there for each other. Those are the things that are key. We are a very unified group. I’m really grateful for the cast we have as a whole. But sometimes we forget to enjoy it. We get wrapped in the stress, and we get wrapped up in this and that. It’s easy to forget to enjoy it. Keeping that at the forefront of everything will make it all worth it at the end of the day.”

On how she’s similar to Noa

“There’s so much in common and there are so many differences. She’s a character that has truly so much of me as a person, and I feel like I’ve taken so much of the character. I grew up as an athlete, so I understand what that dedication and that discipline is like, so that came in handy when playing Noa because there’s something about that mindset that’s so different from anything else. Also being an actor and having to dedicate my whole life and existence to it at such a young age really resonates with that. I would also say she’s very loyal, very straightforward, doesn’t really fluff it up. She does a good job at the balance of honesty and loyalty. I try to have those qualities. I’m a very straightforward person as well and then we differ on a lot of other things. She’s honestly way better than me at standing up for herself. Way better than me at believing in her own strength, which is something I love and would love to take away from her.”

On the cast’s “ridiculous” theories about “A” while filming

“I have so many theories. We never knew more than our characters knew at the time we were shooting. We got every script the week before shooting it. It wasn’t like from the get-go we got a lowdown of who, what, where, when. People are gonna sit with these episodes for a week. We sat with them for nine months, therefore all of our theories got pretty ridiculous. It was a fun shoot. It was filled with conspiracy theories. We constantly found different incriminating factors about different characters and we would scour the sets of bits and pieces of clues we could find to try to piece it all together. It was our very own Nancy Drew mystery backstage.”

Pretty Little Liars: Original Sin is available to stream on HBO Max. Here’s how to watch it for free.