A good thriller movie with elements of horror needs the right cast, some intriguing suspense, and a compelling backstory that reveals a bit about the villain’s motivation. Ma has several of these elements. Set in small-town Ohio, the film follows Sue Ellen (Octavia Spencer), a lonely veterinary assistant who randomly befriends a group of teens after reluctantly agreeing to buy them some much-coveted alcohol. There’s Maggie (Booksmart’s Diana Silvers) who has recently arrived in town with her newly divorced mom, Erica (Juliette Louis). There’s Andy (Corey Fogelmanis)–the boy who catches Maggie’s eye, Darell (Dante Brown) the token Black boy in the crew (in a town that has a shocking number of Black folks), Chaz (Gianni Paolo) the pretty boy jock, and Hayley (McKaley Miller), who rides the fine line between being badass and overly entitled.

Taking pity on the kids and their lackluster hideaway, which consists of the great outdoors and a disgusting pile of trash, Sue Ellen offers Maggie and her crew her basement as a hangout. However, she has several conditions. The teens are never allowed anywhere else in her home; one of the kids must always stay sober for the drive home, and no cussin’. She even fixes up her unfurnished basement so that it’s more comfortable for the teens. Perhaps I’ve just been living too long, but red flags were raised almost as soon Sue Ellen’s invite left her lips. There seemed to be no real reason why a middle-aged woman would want to hang with a group of teens. But alas, this is Hollywood so I was able to suspend my concern for a brief period.

Unfortunately, my ability to go with the flow ended right around the time Sue Ellen adapted the nickname “Ma” and randomly pulled out a gun on one of the kids.  After terrorizing them for a few seconds, she asks him, “You think I’m Madea?!” Though she acts like it’s all a joke the teens–mostly Maggie, start to realize something isn’t quite right with their new older BFF. That’s when the movie starts to fall off the edge. Sue Ellen begins stalking the teens–blowing up their phones and social media accounts and randomly appearing on their high school campus. 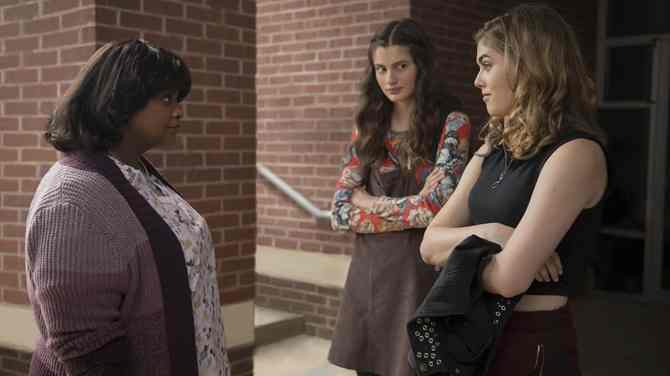 We learn through several flashbacks that Sue Ellen has always struggled to fit in. Back in the ’80s while she was in high school she was subjected to a horrific assault (can we stop using sexual assaults as plot points in film?) that led to a mental break and a revenge plot more than two decades in the making. If Ma had leaned more on traditional horror tropes rather than forcing the actors to throw all of their talents on top of a flimsy script the film might have worked. Unfortunately, the further along Ma gets, the more perplexing it becomes.

Though I tried to reserve my judgment of the film until the end, when Sue Ellen literally paints Darrell’s face white, declaring that there is only room for “one of them”–the entire flick descended into complete pulp. With plot holes as wide as gaping doors, and no real command on whatever mental illness Sue Ellen was surely suffering from, all you can really do is laugh at the movie.

I really wanted Ma to work. The young cast is fresh and earnest, Spencer is beyond entertaining as she swings from one mood to another without any warning, rhyme or reason. Also, the scenes between Maggie (Silvers) and her mother, Erica (Lewis) were compelling enough that I wanted to know more about their mother/daughter relationship and their backstory over everything else that was happening in the movie. Unfortunately, with the campy script and the plot line ripped straight from Hulu’s The Act–by the third act of Ma, the movie literally implodes in on itself leaving the audience wondering, wtf they just watched.

Ma is in theaters now.