If you think Uber is the only new app that allows you to call a car within a few minutes, you’d be mistaken! San Fransisco-based company Lyft, officially founded in 2007 under the business name Zimride (since sold to car rental giant Enterprise), has another option, and it’s even more prolific: they’re already established in 60 U.S. cities, in contrast to Uber’s activity in 55 American cities.

What Makes Lyft Special:
“The commute is the part of your day that’s least associated with positive emotions,” Lyft’s director of communications, Erin Simpson, tells StyleCaster. “I think a lot of people really enjoy the fun Lyft experience. We are already that app people turn to because you’re going to get that fun experience and have that conversation with someone you might have never met before.”

Unlike Uber, Lyft is a true peer-to-peer car-sharing experience. The drivers, Erin explains, are “normal people,” and they give rides in their own personal vehicles–after being approved via a rigorous background check that involves examining any criminal offenses, looking at driving records, and thoroughly inspecting the car. Once you’re approved as a Lyft driver, you’re given a pink mustache to attach to the front of your car to mark that you’re currently available to give rides. 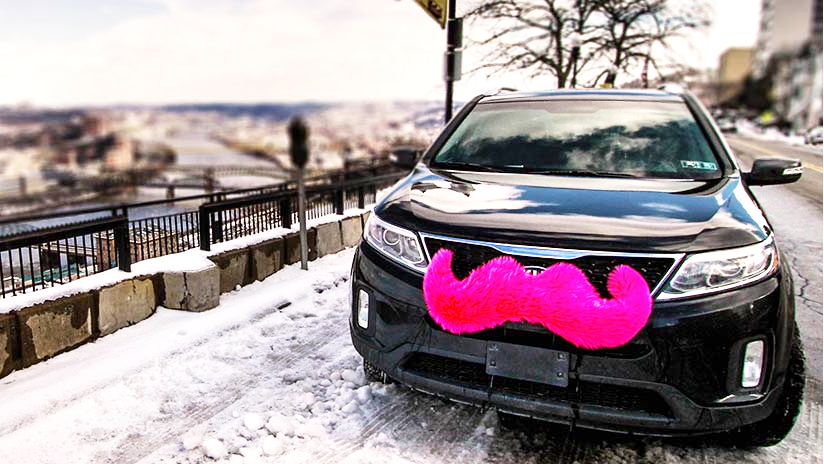 How It Works:
Similarly to Uber, if you’re in need of a ride, you pull up the Lyft app, and it shows you which active Lyft drivers are closeby. You tap the car closest by, and it pulls up a photo of the driver (as well as his or her name), a photo of the vehicle, and the driver’s average review score on a scale of one to five stars. Your car arrives shortly thereafter, and Erin explains that passengers often sit in the front seat instead of the back.

“Lyft passengers typically sit in the front seat, and you greet your driver with a fistbump,” Erin says. “You can charge your phone if you need to. Drivers often keep their vehicles personalized, fun things to add to the experience. It really is more personal, like getting a ride with someone you know.”

Once you arrive to your destination, your card (which is saved to the app) is automatically charged the right amount–there’s no cash involved.

It’s cheap!
The best part: Lyft, Erin says, is about 30% cheaper than your average taxi, depending (of course) on the city you’re in. “The long-term vision of Lyft is to make tranasportation more affordable and reliable, and to close those gaps that both private ownership and public transit have not been able to solve,” Erin stresses.

Social good:
Lyft has a really cool social program called Lyft for Good, through which the Lyft community of drivers can organize missions to use their transportation powers for good.

“A couple weeks ago in San Francisco, we partnered with Meals on Wheels and we had more than 140 drivers delivering emergency preparedness kits to homebound seniors for a day,” Erin explains. Since then, the program has taken off, and the company has a goal of powering 100 Lyft for Good initiatives by the end of 2014.

When the company launches in new cities, for the entire first weekend of launch, they match as much money as is given for rides and donate it to a variety of charities, which are chosen by the drivers themselves.

Check it out: Lyft.com