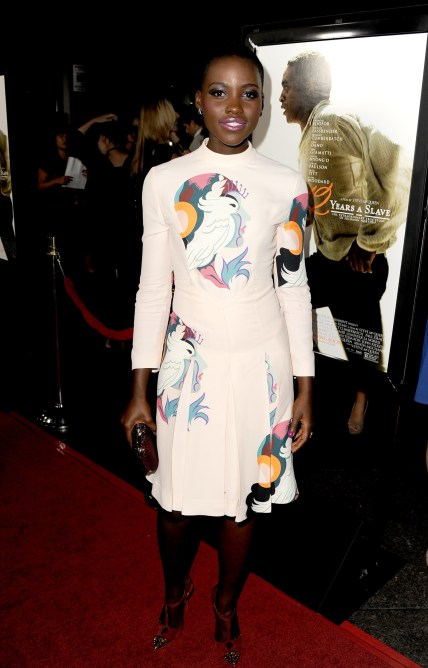 Come Oscar season, Lupita Nyong’o will be a household name, but who is the 30-year-old actress New York Magazine‘s predicting will be 2013’s biggest emerging face? The 30-year-old Kenyan is already generating Oscar buzz for her emotional performance in the Steve McQueen directed, “12 Years A Slave” which, it should be noted, is her first-ever American film role.

MORE: Report: “Glee” Is Ending After Next Season

Nyong’o plays Patsey, a young slave who is objectified by the sadistic cotton plantation owner Master Edwin Epps (played by Michael Fassbender) who along with his angry wife (Sarah Paulson) abuse her to the point that she wishes she were dead. There are so many interesting things worth knowing about the beautiful actress who got cast in the role three weeks before graduating from the prestigious Yale School of Drama, but we’ve rounded up the top five to get you acquainted.

Nyong’o didn’t believe acting could be a viable career because there wasn’t much of an entertainment industry when she was growing up in Kenya, nor did she see many African women in movies. Her perspective changed after noticing actors who resembled her in “The Color Purple.” Though she acted in plays while attending Hampshire College in the U.S., she was still ambivalent about studying acting until a career crisis made her realize she needed to be a professional actor, and to apply to the best schools, including Yale. The rest, as they say, is history.

2. She’s been killing it on the red carpet.

For the L.A. premiere of “12 Years A Slave”, the actress, who sat front row at the Miu Miu Spring ’14 show, wore a light-pink long-sleeved high-neck dress from the brand, which featured a festive print of cockatoos and art deco shapes. The fashion-forward design fit her like a glove, and Nyong’o’s bubblegum pink lipstick was a smart beauty move.

Her stylist is Micaela Erlanger (who also works with Michelle Dockery), but we have to give the actress credit for having the confidence so early on in her career to pull off bold looks from the likes of Prada, Erdem, and Roland Mouret. We love her bright and minimalist choices so far, and can’t wait to see more of her sartorial chops once awards season kicks off.

“I was certain I was going to receive a call and they were going to say, “I’m sorry, we made a mistake,” she told Vulture. “And it wasn’t until the day I was flying to Louisiana that they made the announcement on Deadline that Patsey had been cast. So the whole time I was like [whispers], “Maybe they’re reconsidering. They must be reconsidering. Luckily, I wasn’t fired.”

4. She did some intense preparation for the part.

In an interview with Vulture, Nyong’o said one of the first things she did was visit the Blacks in Wax Museum in Baltimore, where her friend had told her you could get a three-dimensional experience of slavery. There she saw a bale of 500 pounds of cotton, which is what her character was tasked with picking every day, and she was in shock after seeing it was taller, thicker and wider than her petite frame. Pretty insane, huh?

MORE: Who Is Cressida Bonas? 5 Things To Know About Prince Harry’s Future Wife