Lucy Hale‘s thick, bushy eyebrows have become synonymous with her look and her career. So to imagine her without them is like telling Kim Kardashian to stop contouring. (It can’t be done!) And though we doubt that the 28-year-old actress will permanently abandon her beautifully bold brows any time soon, we can at least see the dark moment in her life when she thinned them down tremendously, and boy, was that time grim.

Like Kim K. and Drew Barrymore, Hale is the latest celebrity to look back on this embarrassing, yet common, beauty regret: super-thin eyebrows. In a throwback posted on her Instagram story, the “Life Sentence” star reminisced on when her eyebrows used to be two tiny arches. The picture, which was a screenshot of an Instagram posted by Hale’s longtime friend and “American Juniors” competitor Katelyn Tarver, featured Hale, Tarver, and their other friend, Chantel Brunnert, preparing for the 2003 Teen Choice Awards.

And while there’s a lot to talk about in the picture, such as the ladies’ “Charlie’s Angel” pose and their matching Powerpuff Girls-like outfits, what caught Hale’s attention were her crazy-skinny eyebrows. To poke fun of herself, Hale screen-shotted the picture and posted it on her Instagram story with a caption roasting 13-year-old herself for over-plucking her eyebrows.

“15 years ago. At the teen choice awards. My eyebrows y’all,” Hale wrote along with three laughing emojis. “Thank u @katelyntarver for sharing this content w the world.” 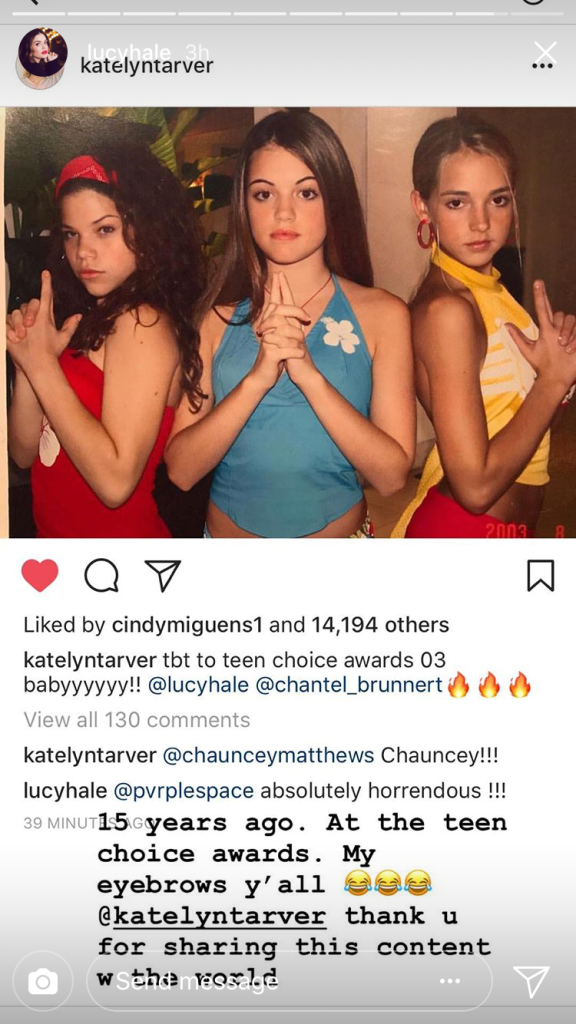 Hey, we’ve all had a thin eyebrow phase, so we can’t put all the blame on Hale. Good to know that they’ve grown back and Hale has put down the tweezers.