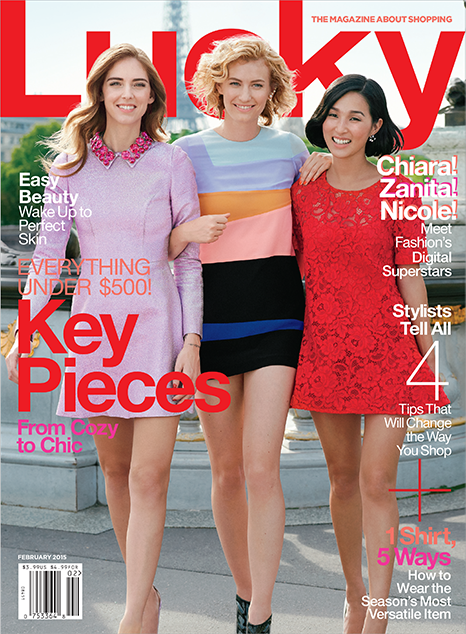 This is a pretty big deal: In lieu of an actress or a model, Lucky magazine decided to put three fashion bloggers—Chiara Ferragni of The Blonde Salad, Zanita Whittington of Zanita Zanita, and Nicole Warne of Gary Pepper Girl—on its February 2015 cover.

Why is it a big deal? Well, for one thing, cover stars are what sell magazines, and while these three are well-known among digital-savvy fashion fans, they’re extremely niche—which is a huge risk for a national magazine. Even if you’re not a fan of, say, Scarlett Johansson or Jessica Alba, you know who they are when you see them at the newsstand, whereas most average women probably have never heard of or seen Zanita, Chiara, or Nicole before.

It’s also a big deal because, frankly, it solidifies the idea that blogging is an industry that produces actual talent, much like the worlds of film, television, and music. These girls are making waves in fashion, making real money—it was reported that Ferragni was set to rake in $8 million in 2014 thanks to partnerships, endorsements, and other projects—and fronting a magazine that, last month, had Taylor Swift on its cover.

We certainly commend Lucky for choosing to put bloggers front and center. In general, fashion magazines can feel a bit dated in the wake of the internet, and seeing the same ho-hum Hollywood stars on covers just doesn’t feel modern or up-to-the-minute anymore. Lucky obviously realized its demographic (or target demographic, anyway) relies on the web to tell them what’s cool and who’ll be the Next Big Thing, so why not use that information in your print product?

It’s a safe bet that this was the work of Eva Chen, Lucky’s buzzy, young, social media-savvy editor in chief, who no doubt has more freedom to play with the publication now that it’s poised to spin off from its parent company, Condé Nast, and will combine with e-commerce platform BeachMint, creating an entirely new company called The Lucky Group early this year.

So, although there’s been doubts among critics and insiders as to whether fashion bloggers have longevity—or the skills needed to make it in the industry—we think this is pretty solid validation that they’re doing something right.

Do you think fashion bloggers belong on the cover of magazines? Sound off below!