We all love a good couples’ gift exchange. Long before I ever even met my boyfriend, I fantasized about all of the cute gifts that I could give and receive one day in the name of love. Not to mention all of the couples’ gifting videos I scrolled past (and still do) on TikTok, which only made me dream harder. But by the time I finally met my boyfriend, we were not only broke college students, but broke college students trying to make it work long-distance. It goes without saying that there were a lot of obstacles in the way of a meaningful gift exchange, but somehow, his gift of the LoveBox, managed to overcome them all.

The Lovebox happened to be one of those couples’ gifts that I had seen on TikTok, and it had been on my mind ever since. It’s the perfect gift for long-distance partners, family members or friends—a cute little box that displays messages that can be sent from a phone anywhere in the world.

Smart, right? It has a cute aesthetic, too: The sleek wooden box has a lid that opens to reveal a display screen and the little red heart on the front spins when there’s a new message, alerting the owner. The Lovebox that I received is the Black and White version, which can display stickers, drawings and messages in black and white, but there’s also a full-color version for a little more coin. 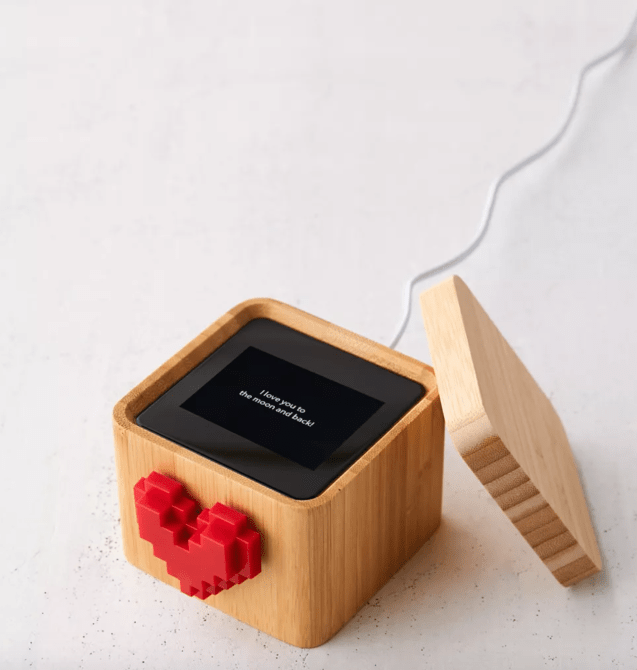 My boyfriend surprised me by ordering the Lovebox on Urban Outfitters and having it delivered to my house at the same time that he was visiting me. It arrived in an adorable cardboard box with a heart on the front that contained instructions, individually wrapped parts for putting the box together (It’s very easy, only two parts) and a cord to connect the box to a power source. We got to work right away, unwrapping the spinning heart and placing it onto the front of the Lovebox together.

Next the instructions said to plug in the box and begin setting it up, a process which only took a few minutes—and the Lovebox itself helped out! First it displayed the name of a Lovebox wifi network that my boyfriend connected his phone to, then a page popped up on which he chose a language for the box and entered the wifi information of our location.

Next he named the box and entered his email. Finally, the screen displayed a secret code which my boyfriend entered into the Lovebox app after creating an account. From there he was able to write me endless adorable messages. 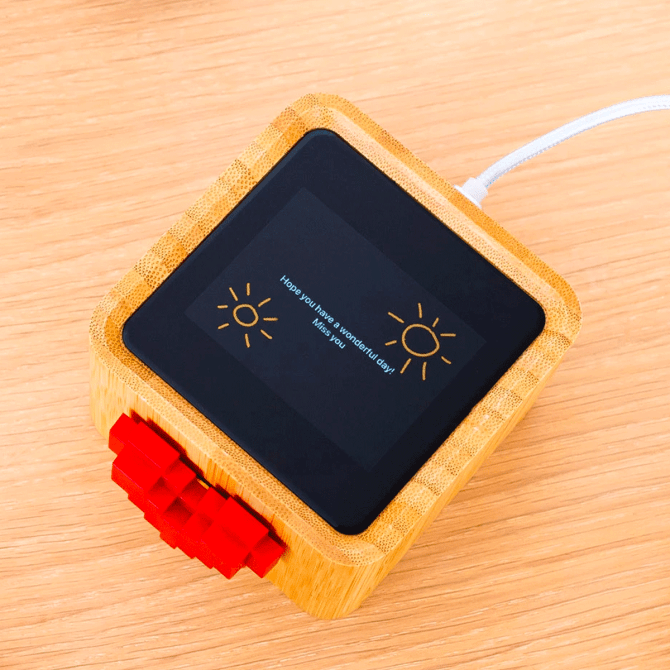 My boyfriend and I had such a fun time using the Lovebox from a short distance for the rest of his visit, but it was really put to the test when his trip ended and he headed back home—which is over 2000 miles away from me. We were worried it might be hard for the box to work perfectly from opposite sides of the country, but I’ll spare you the suspense, it worked perfectly!

He sent me a message from the airport right when he landed at home and still surprises me with unique notes all the time. The Lovebox has kept us close and added a fun, romantic touch to long-distance dating, so I recommend it to every couple out there.