As viewers remember, Barnett and Amber “met” in The Pods on Love Is Blind‘s first episode where they bonded over dirty jokes. They didn’t know what each other looked like at the time, but they knew they had a connection—at least Amber did. Barnett, on the other hand, was unsure between Amber, Jessica and LC. In the end, though, he chose Amber, and the two met face to face for the first time on their last day in The Pods.

Amber and Barnett’s relationship wasn’t easy though. Though their sex life sounded busy, the couple fought over Barnett’s family and Amber’s credit card and student loan debt that amounted to more than $20,000. Fast forward to the finale, and Barnett was unsure about Amber up until the moment she walked down the aisle. As she told viewers in the episode, Barnett was texting Amber about his cold feet the entire night before the two tied the knot. In the end, though, Barnett and Amber said their “I do’s” and became legally married. 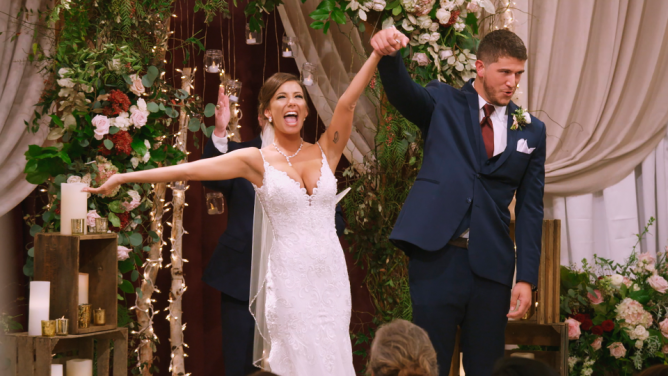 Are Barnett and Amber still together from Love Is Blind?

Before we dive into what Amber and Barnett revealed in After the Altar, let’s answer the big question: Are Barnett and Amber still together after Love Is Blind? The answer? Yes! Cue the champagne popping! After the Love Is Blind season 1 finale in February 2020, both Amber and Barnett took to their Instagrams to confirm they were still toether. “One of the craziest, most wonderful experiences of my life. I wouldn’t trade it for anything in this world,” Barnett captioned a photo of him carrying Amber. Amber posted a similar photo with the caption, “Thanks for being there to catch me when I fell…. and making sure I was laughing the whole way down even though it makes me look like a lunatic lol .”

The couple also gave an update about their married lives to The Los Angeles Times at the time, where Amber described how their relationship is different than other couples, “We’re kind of working backwards in the marriage and taking the pressure off. We have the commitment, and now we’re taking time to have fun and be together like a normal couple would take time with an apartment before they got a house together,” she said.

What about two years later? During the Love Is Blind: After the Altar special, Amber and Barnett confirmed that they’re still together. The special saw Amber and Barnett celebrate their two-year wedding anniversary with a finale party, which also included Lauren and Cameron, the only other married couple from the show. At the party, Amber and Barnett came face to face with Jessica, who they haven’t seen in a long time. In the episode, Jessica, who has her own boyfriend, went up to Barnett to try to give him and Amber a gift as an apology for how she behaved in season 1. Barnett took the gift but walked away from Jessica, telling her that he wasn’t allowed to talk to her. When Amber learned of the gift, she told the cast that she didn’t want anything to with Jessica after she disrespected her during the show.

During the special, Amber and Barnett also revealed their plans for a baby. While Amber wants to start trying soon, Barnett doesn’t think they’re ready yet. “Matt is so analytical. He has it in his head that there’s this checklist of things you have to do in life to be ready for a kid. I feel like the longer he waits to achieve the things on that checklist, the more unrealistic it’s going to become. Because you’re never gonna have the perfect situation to have children.”

Another reason that Amber and Barnett have put off having kids is Amber’s recent diagnosis with epilepsy. She revealed that a few months before filming for the special, she seized on their bathroom floor. Amber, who had no recollection of the seizures, revealed that she contacted her doctor after and was diagnosed with epilepsy.

“Obviously, I wanted to have kids sooner. But also with everything that’s been going on with me health-wise, it’s scary,” she said. “I feel like the longer we wait, the harder things are going to be on me physically to have kids. I just feel like shoes just keep dropping on us and he’s more concerned about his own fears that he doesn’t acknowledge mine at all, especially when it comes to how scared I am with having high-risk pregnancies and in his mind, I feel like he thinks he can put it off forever.”

Love Is Blind: After the Altar is available to stream on Netflix.