It’s not something most of us want to relive, but losing your virginity (hopefully) kicks off a lifetime of sex, so it’s kinda fun and weird to look back and think about what your first time ever was like. For these women, you’ll see a recurring theme of backseats of cars, booze, and TV/movie references. Guess it makes sense, since “Netflix night” is still code for “staying in and hooking up” for many 20-something adults.

Regardless, live (or relive) vicariously through these brave women, who dredged up icky, boring, and a few legitimately sweet memories about losing their V-cards:

“I did it with my freshman year dorm neighbor, in his room, where he had black sheets on his bed. Afterwards, we shared a slice of pizza he had in his fridge and watched The Office. We broke up a few months later. Simultaneously sad and funny. I still kind of wish that it had been like Pacey and Joey on Dawson’s Creek.” (29, New York) 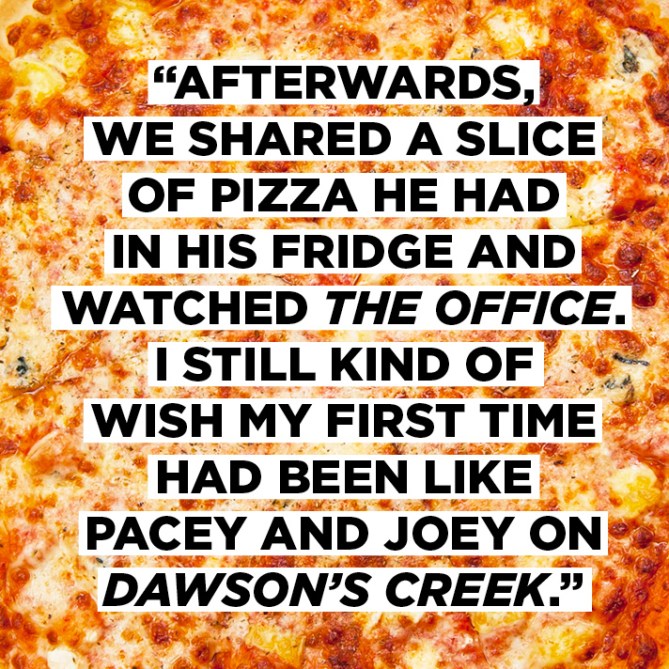 MORE: What Having Sex Without a Condom Really Means for Your Relationship

“I’m totally grateful that I had a super normal, non-traumatic experience. I dated my high school boyfriend for a year and then we had sex in his room when we knew his parents wouldn’t be home—classic. I was 16 and he was 18. The only thing I remember being weird was this strange feeling afterwards that something was still inside me? Kind of like a phantom penis—weird. But I learned later that is apparently 100 percent normal.” (26 YO, New York)

“I lost my V-card with my high school boyfriend. We were parked on the outskirts of a bonfire party—the typical type of party where we lived, in the middle of nowhere Maine. we were both a little tipsy, and had been talking about doing it for awhile. The alcohol probably gave me the confidence to go for it in the backseat of my parents’ car. It was awkward and the actual sex was not that memorable.” (28, Norwich, VT) 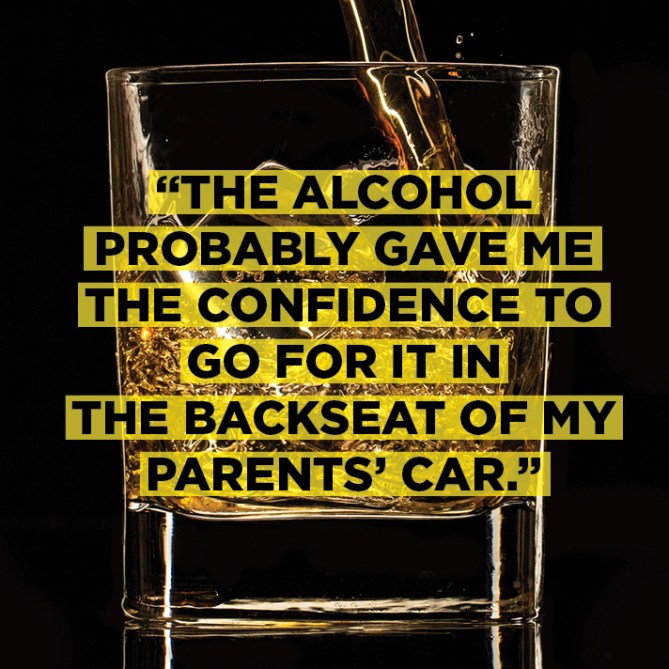 More: This is How it Feels to Be a 27-Year Old Male Virgin

“I was one of the lucky ones: My first time was with someone I loved and who loved me back. I was 18, getting ready to leave for college, and he was a Notebook-style summer fling. He was a year older and more experienced, but had patiently waited until I was ready. The weekend before we were both scheduled to leave, he came over to my parents to watch a movie. We decided on Love and Basketball, which to this day remains one of my favorite movies. Halfway in, I told him I was falling in love with him. He said he loved me back, and we went for it. It was painful, but he was gentle, kind, and loving.” (28, New York)

“It happened on the last day of freshman year of college with my boyfriend of six months. Our dorm rooms were packed up, and everyone else had already left for the summer. The only thing he hadn’t packed up was the mattress cover—a.k.a. bed bug protector—on his twin bed. That’s where it happened, while we waited for my mom to drive to campus to get me and all my stuff. Squeaky, painful, clumsy, weirdly sterile, very practical. Sexy: not in the least.” (29, New York) 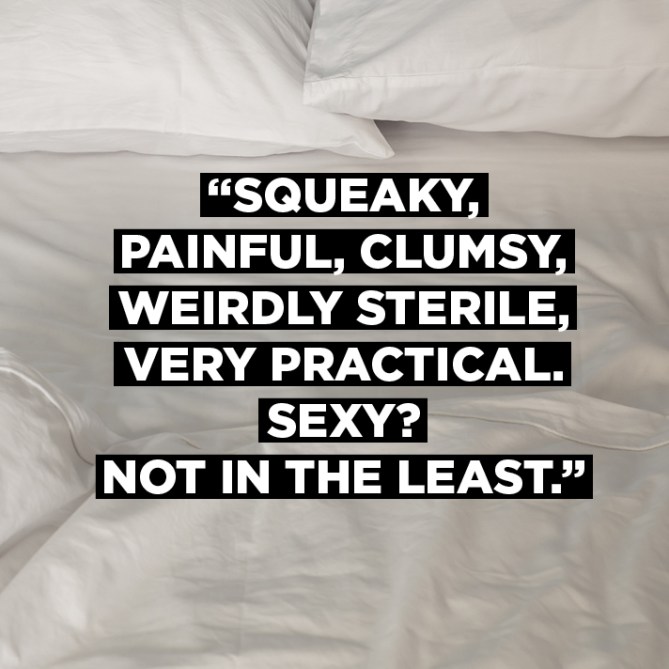 MORE: Why I Don’t Regret Dating a Married Millionaire

“My first time having sex was actually makeup sex with my high school boyfriend after we’d had a fight. This other guy tried to kiss me at a party, and in order to prove that I wasn’t interested in the other guy, I was like, ‘fine, let’s do it.'” (29 YO, New York)

“I lost my virginity to my high school boyfriend, slightly tipsy after a few Keystone Lights. We hadn’t talked about it beforehand, but it didn’t feel uncomfortable or like one was pressuring the other, it just sort of happened. No music, no mood-setting—just pretty basic, protected, missionary that was over about as quick as it started. And then who knows. We probably went to Chipotle or something.” (29, New York) 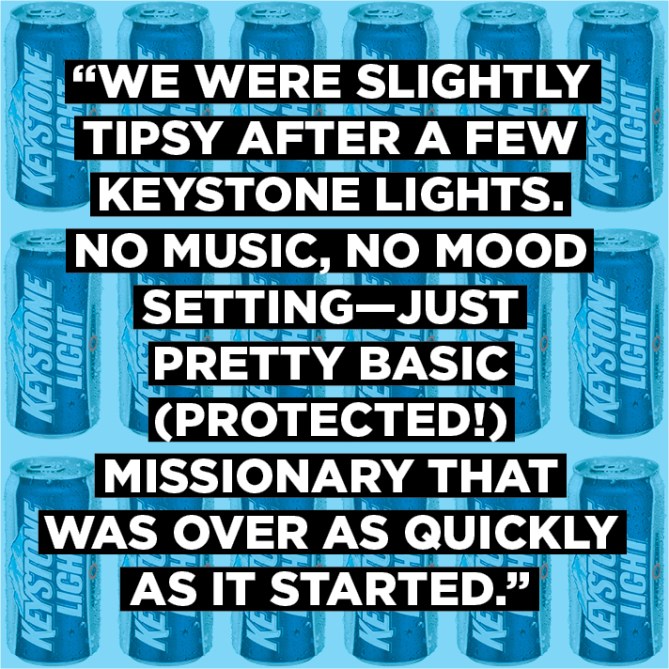 “I was 17, he was 22, and I had only had my first kiss like less than a year before. There was Bacardi orange and Hawaiian fruit punch, and that’s pretty much all I remember.” (29, New York)

“The dude I lost it to was super emotional and made it more of a big deal than I did. He was my high school boyfriend and super religious. Basically I had to make him my boyfriend so that he’d feel comfortable doing it with me. So not worth the effort after all!” (29, Los Angeles) 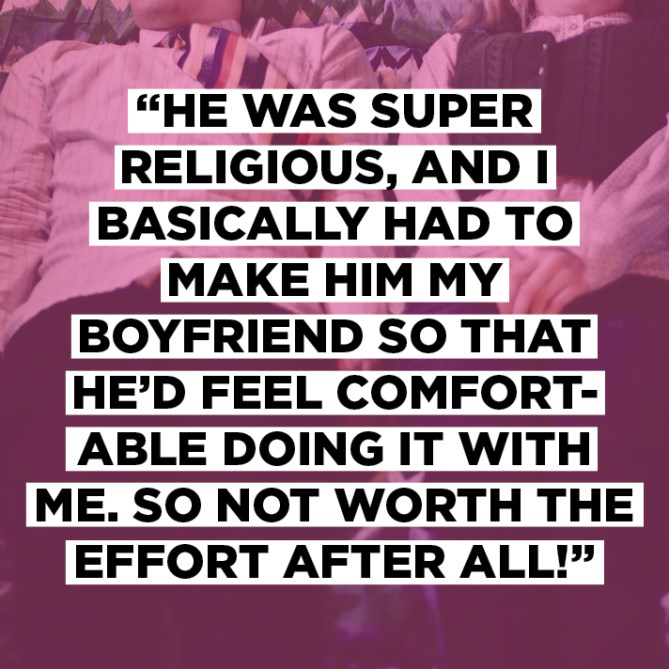 “We were both 17, and virgins. We had been dating for a few months, and we had talked about having sex for a while—we both knew it was the right time. I remember the occasion very fondly, actually—he was so  careful with me, even though he must have been nervous himself. He kept asking if I was OK. We had said ‘I love you’ already, but I remember thinking that the way he acted that night was the truest manifestation of those feelings: the degree to which he wanted me to be comfortable, and how gentle he was. I still consider myself incredibly lucky to have lost my virginity this way—to me, it’s a significant thing, and I’m glad it happened with a significant person. In fact, 10 years after the fact, we got married! Hilariously, after losing my virginity, I ran straight upstairs and told my mom, who was really happy that it had gone well. My mom and I talk about everything.” (28, Philadelphia)

“I thought I lost it in the backseat of my parents’ car, but now I’m not sure if that awkward dance could even be considered sex. He was clumsily tall and I had no idea what I was doing.” (27 YO, Portsmouth, NH) 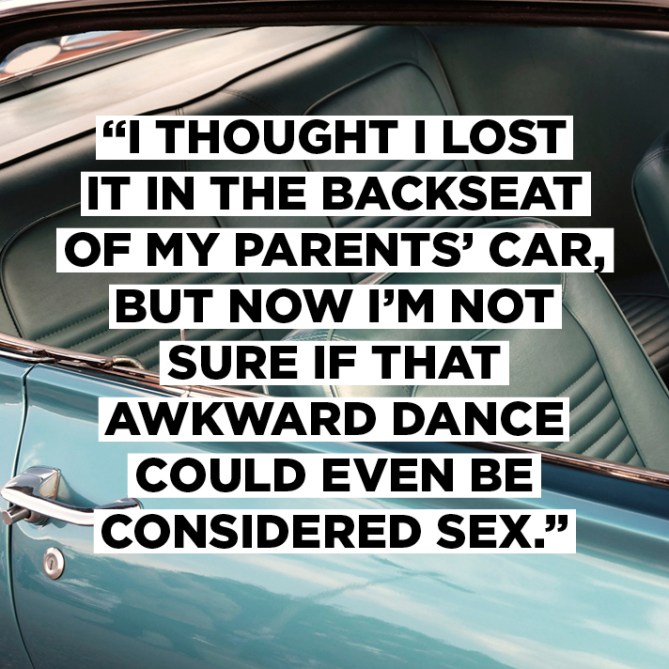 “He was Catholic, I was not. He was pro-life, I was not. So for over a year, I refused to have sex, because I disagreed with his politics—and didn’t want to be intimate if he wasn’t going to be supportive of me in the worst-case scenario. I was 18 and his approval and support felt very important. We would fight about it periodically. I remember yelling: ‘Look me in the eyes and tell me that if I got pregnant, you’d hold my hand in an abortion clinic and support me 100 percent!’ He was never comfortable talking about sex, so these were usually one-sided fights that ended in us hooking up—but not having sex.

He eventually came around, begrudgingly. I was already on birth control for acne. One night, we were hooking up—and suddenly, we were having sex. After all of that fighting, there was no discussion. He was huge, but somehow I don’t remember that about the first time. Afterwards, I could tell that he felt guilty. I waffled between feeling like I had ‘arrived’ and wondering why it wasn’t more special: We were in my dorm room. My sheets were orange. The lights were on. We’d been drinking wine, but we weren’t drunk. It just wasn’t really that memorable at all, especially compared to the drama leading up to it.” (28, New York)