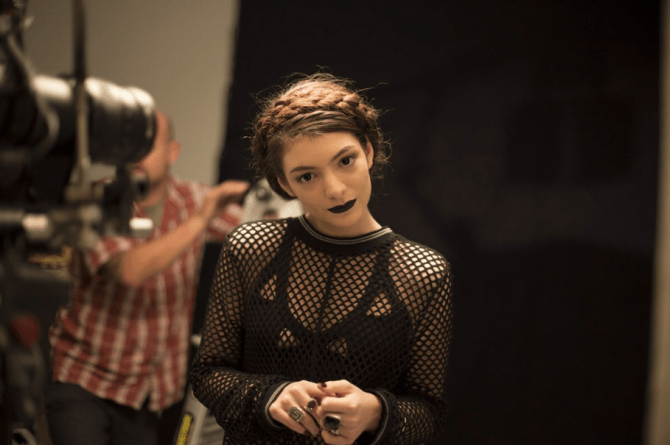 Lorde, a 16-year-old Kiwi songstress with the mermaid locks, artsy vibes, and cool-girl chops, has been making some serious waves in the States this year with her hit song, “Royals.”

Currently touring the globe with her debut album, Pure Heroine, the Croatian-Irish by way of New Zealand (how amazing does that sound?) musician has come a long way from her suburban roots, where she was discovered in a talent show by Universal at age 12. Now a platinum artist, her hit song is a seductive play on hip-hop hits that name-check the luxe life, and is chock full of addictive lyrics  you’ve surely committed to memory by now: “That kind of luxe just ain’t for us / We crave a different kind of buzz.”

Considering her young age, there’s lots to tell and even more to know about the singer-songwriter, starting with the fact that she much prefers to be called a musician, since she’s been penning her own lyrics since she was a 12 (!). That commitment, combined with her uniquely witchy personal style and a decidedly grounded approach to fame and the industry, Lorde is proving her reign is just beginning.

1. Her name isn’t Lorde.
When Ella Yelich-O’Connor was even younger than she is now — she turns 17 next month — she had a serious obsession with aristocracy, to the point of actually taking pen to paper to map out royal family trees. When the time came to zero in on a stage name, she was drawn to the name ‘Lord,’ but, feeling that it was too manly, she added an ‘e’ to femme it up.

2. She’s not afraid to call out her pop peers.
As her album has picked up steam in the U.S. over the past few months, the self-proclaimed feminist musician hasn’t been to shy to share her feelings on some of her contemporaries in the American music market.

On Justin Bieber: “I feel like the influences that are there in the industry for people my age, like Justin Bieber or whatever, are just maybe not a very real depiction of what it’s like to be a young person.”

On Selena Gomez, regarding her song “Come and Get It”:  “I’m a feminist, and the theme of her song is, ‘When you’re ready come and get it from me.’ I’m sick of women being portrayed this way.”

On Taylor Swift: [She is] “too flawless and unattainable.” And then later: “I try to stay away from talking about boys all the time. You can go to Taylor Swift to hear that.”

When she was called out on her perceived harshness, Lorde told MTV News: “I think there’s a funny culture in music that’s only happened over the last 15 years, that if you have an opinion about something in music that isn’t 100-percent good, you’re a ‘hater,’ even if you have perfectly reasonable grounds for that critique. People will say exactly what they think about a movie or a TV show, and that’s fine, but as soon as you say it about a record, you’re like some little zombie in a funny dungeon.”

3. She’s got good taste in influencers.
Lorde cites Grimes as her musical idol, who then returned the crush, giving props right back to Lorde on Twitter. Lorde grew up to the tunes of soul musicians Otis Redding and Etta James, which, paired with Sleigh Bells, James Blake, and Nicki Minaj, influence Lorde’s electro-pop sound.

4. She’s breaking records.
When Lorde’s hit, “Royals,” unseated Katy Perry’s “Roar” and Cyrus’ “Wrecking Ball” for the  number one spot on the U.S. Billboard charts, not only did the rising star make Kiwi history, she also became the  youngest solo artist to top the Hot 100 since Tiffany’s “I Think We’re Alone Now” dominated back in ’87, when Tiffany was also just 16.

5. She’s a thrifter.
Her onstage style includes brooding hues, long dresses, and chunky footwear, and she has a professed love for Rodarte, Alexander McQueen, and Rick Owens, but in her characteristically cool, up front way, the singer admits to not having enough money to afford those brands just yet. Instead, the singer goes “op shopping” with her friends, scouring church-run thrift stores in her hometown for vintage finds.