Though award shows have looked drastically different this year—including few in-person moments and far more virtual ones—we’ve still been blessed with plenty of jaw-dropping celebrity ensembles. Not every star has chosen to wear red carpet-ready outfits (some opting for casual at-home vibes instead), but those who do dress to the nines for this year’s award shows have been seriously slaying. Case in point: Lizzo’s 2020 Billboard Music Awards look.

Dressed in custom Christian Siriano (because of course), Lizzo accepted the award for Top Song Sales Artist at the BBMAs. And while I’m high-key excited Lizzo now has another award to add to the shelf in her house—featured in her “73 Questions with Vogue” video, in case you haven’t seen it yet—the best part about the singer’s BBMA acceptance was her ensemble. The custom Siriano look was an absolutely major statement in the most literal sense. A black one-sleeve mini dress emblazoned with the word “VOTE” over and over? Talk about a culturally relevant style moment!

I don’t know about you, but I’m suddenly inspired to wear voting looks and voting looks only. Most of us don’t have Christian Siriano on speed dial, but there are still plenty of seriously cute voting merch options available right now. Even if you can’t wear a Siriano original (my dream!!), you can still rock outfits that spread the message. Maybe someone will make a t-shirt featuring a photo of Lizzo wearing this ensemble, too. A meta moment I’d definitely be there for. 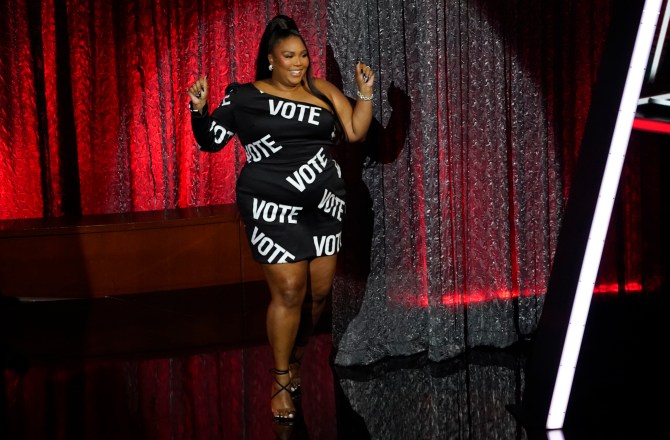 Lizzo kept the rest of the ensemble simple (considering nothing could make a more impactful statement than the ‘VOTE’ dress itself) with silver diamond earrings, a chainlink bracelet and a stunning ring, along with black strappy heels. Hair pulled up in the perfect ponytail—thanks to celebrity hairstylist Shelby Swain and her army of GHD hot tools (!)—Lizzo looked as gorgeous as ever.

Perhaps the most-missed aspect of her BBMAs look, though, was Lizzo’s incredible nail art. Nail artist Eri Ishizu created the ultimate manicure for the singer—and quite frankly, I’m about to recreate it at home. She matched Lizzo’s nails to her dress exactly, writing “VOTE” on each ring fingernail. I’ll probably end up with a smudge of white nail polish when I attempt to DIY the mani, but Ishizu’s execution was flawless.

Of course, Lizzo didn’t use only her ensemble and nail art to make a statement. During her acceptance speech, the singer mentioned she’d been thinking about suppression—wondering if she’d be where she was if it weren’t for all the big, Black women who refused to be suppressed. She continued on, encouraging everyone at home to remain true to who they are. “There’s power in who you are,” she says. “There’s power in your voice. So whether it’s through music, protest or your right to vote, use your power, use your voice and refuse to be suppressed.”

Lizzo didn’t do a mic drop, but this speech definitely deserved one. If you didn’t already stan the singer before, it’s never too late to jump aboard this train!