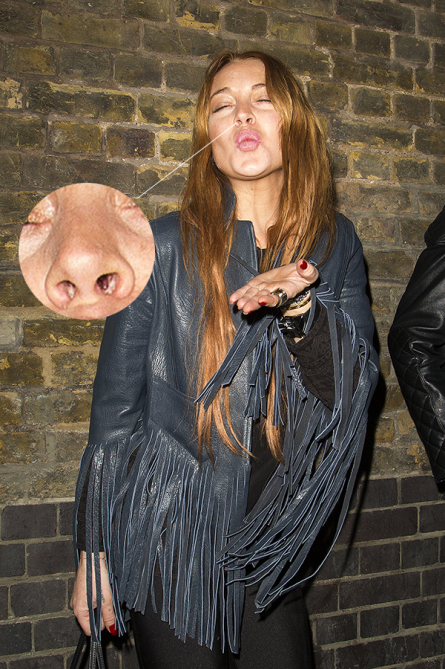 Oh, Lindsay Lohan. After what feels like an eternity watching the troubled starlet attempt to get clean and sober, it seems she still might be having problems staying on the straight and narrow if a new photo is to be believed.

A picture has emerged from photography service Pacific Coast News that has a very pointed caption:

“Lindsay Lohan blows a kiss to photographers as she arrives at the London hotspot Chiltern Firehouse. Although it looks like Lindsay should’ve wiped her nose before getting out of the car, as there appeared to be chunks of an unknown residue caked to the inside of her nostrils.”

Needless to say, things haven’t been going smoothly for the 27-year-old—who’s been in rehab six times—as she recently made the somewhat strange admission on her OWN reality show that she had a miscarriage, and before that her alleged “sex partners list” went viral, which listed all the men she’s slept with. Soon after, LiLo appeared on Bravo’s “Watch What Happens Live”  where she claimed to have made the list as her “fifth step in AA,” but that someone on the staff of the OWN series must have taken a picture of it, and leaked it.

If that’s not bad enough, one of the names on the list, James Franco, vehemently denied ever sleeping with her. Overall, not a good couple of years for the “Mean Girls” star, and while there’s no proof that this photo indicates definitive drug use, nobody would be shocked if that caption was on target.

Take a look at the photo and let us know your thoughts on the matter below!