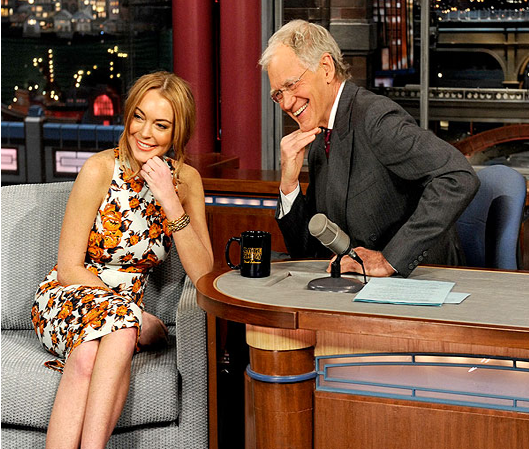 Last night, Lindsay Lohan stopped by CBS’ “The Late Show With David Letterman” to chat with the late-night host—for whom she seems to have an affinity—about a slew of hot-button issues, like her upcoming trip to rehab. (Technically, she was there to promote her cameo in “Scary Movie 5,” but obviously other topics took precedence.)

Considering Lohan treats her court dates like fashion shows, it’s no surprise that she stepped it up for her national TV appearance, opting to wear a chic floral print stretch silk dress by hip New York label Suno (which you can scoop up here for a cool $695 if you’re so inclined.) Aside from an obvious (read: orange) spray tan, LiLo actually looked pretty healthy.

The 26-year-old squirmed her way through Letterman’s grilling, but stated that rehab is a “blessing and not a curse.” When asked by the host, “Aren’t you supposed to be in rehab now?” she  snapped back with: “Do you not watch anything that goes on in the tabloids now? It’s May 2.”

Eventually, when Letterman expresses concern for her, the starlet began to tear up in one of the most awkward but genuine Lohan moments in recent memory.

Of course, it wouldn’t be LiLo if there wasn’t a vodka reference, even if it was a feeble attempt at self deprecation. After reaching for a cup of coffee, she remarks, “Oh, I thought this was going to be vodka!”

Watch the video below and let us know your thoughts on her interview—and, of course, her outfit!