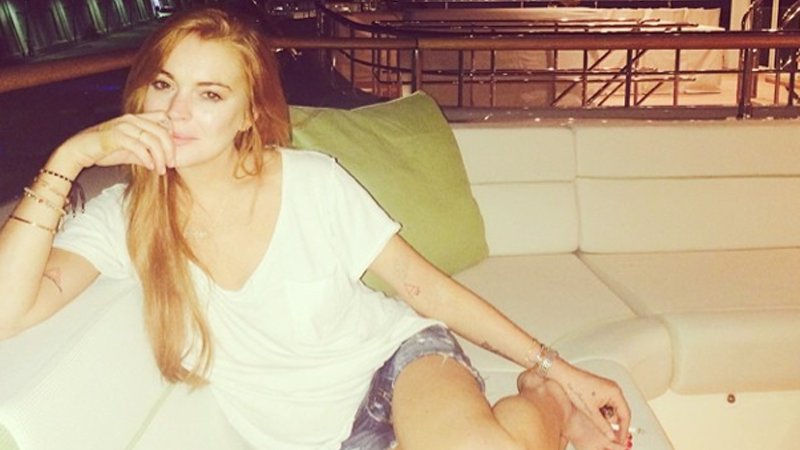 Lindsay Lohan hasn’t had a hit film since 2004’s “Mean Girls,” but that hasn’t kept the troubled actress out of the tabloids, which have been covering her myriad court appearances, stints in rehab, and her alleged long list of sexual partners so often that most of us have forgotten why she even became famous in the first place.

Now, it seems we may get Lohan’s side of what’s been going on with her for the last decade—because seriously, inquiring minds want to know.

A source told U.K’s The Sun: “Lindsay held meetings at major publishing houses in London recently—and the stories she promised the literary agents made their jaws drop. She’s prepared to put everything out there and has already proved she’s not shy with the list of men she claims to have slept with.”

Adding to the craziness of this rumor? Who Lohan wants to have ghostwrite the tell-all.

The source told the paper: “Lindsay is now looking for a ghost writer. It may seem unlikely, but she thinks she’s in with a shot of getting [50 Shades of Gray writer] E.L. James to work on it—they met recently at [London nightspot] Chiltern Firehouse and got on well. Another pie in the sky idea was that she might persuade [Harry Potter author] J.K. Rowling to work with her.”

50 Shades of Lindsay? Good luck. No matter who writes the book though, we do have a few requests. We want to know what really went down with you and Samantha Ronson. Also did you, or didn’t you with James Franco? Details, please. And lastly, we’d never pass on a batsh-t crazy Dina Lohan story. Just saying.

It’s hard to deny that this feels like a last-ditch effort on Lohan’s part to cash in on what’s remaining of her fame—autobiographies like this are usually penned at the end of someone’s career. Still, we can only imagine that Lohan, now 28 years old, has a lot of stories to share, especially considering she’s been in Hollywood since age 12, when she appeared in “The Parent Trap.”

Are you excited for this possible tell-all? Share your thoughts in the comments below!