It’s no secret that Lindsay Lohan attracts drama wherever she goes, but her latest episode is particularly next-level. LiLo managed to chop half her finger off in a Turkish boating accident, which, now that we think about it, sounds about right.

“This is the result of me trying to anchor the boat by myself,” Lohan said in a Snapchat video, showing off her very bandaged middle finger and, for some reason, laughing. “My poor finger!”

MORE: Proof That Lindsay Lohan is Becoming a Kardashian Copycat

Apparently Lohan was just minding her business on boat in the ocean near Turkey yesterday, as one does, when she, for some reason, “tried pulling up the boat anchor and became entangled in it,” TMZ writes, as one … also does. Next, because anchors are heavy as hell, the anchor pulled her into the ocean and somehow chopped off half of her finger. We don’t recommend it, but TMZ has some mega-gnarly images of said bloody finger here.

TMZ reports that her friends had to literally search around for her finger, which they miraculously found on the deck of the boat. Honestly, this all is way too much for us to process on a Monday morning, but—we’re glad she’s OK. 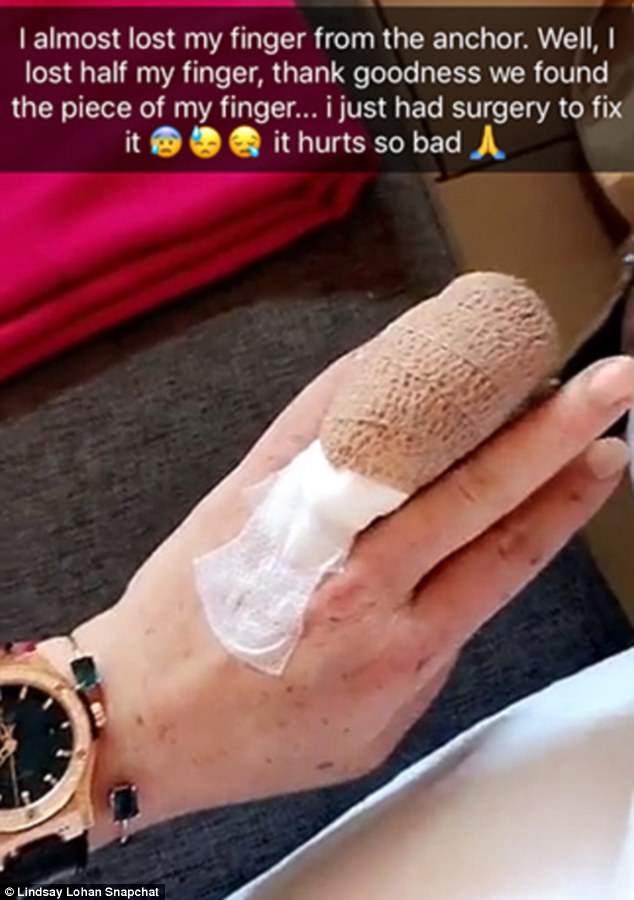 All’s well that ends well, in that a plastic surgeon at the ER to which Lohan was rushed was able to reattach the finger. So. That’s cool.

And then today Lohan posted a “one handed selfie,” along with a plug for #NationalMeanGirlsDay, which is apparently every October 3. Which feels … way too convenient. And then there were all the Syrian refugees Lohan suddenly took an interest in last week.

If it weren’t for the photos, we’d be assuming this was all an elaborate attention-seeking ploy. But unless she has a really, really good Photoshop expert on call, we’ll chalk this up to a highly well-timed coincidence. Feel better soon, Lindz. We’re rooting for you.