Lindsay Lohan, completely sane 30-year-old, and Egor Tarabasov, her weird 22-year-old lover, have apparently called off their engagement, according to Page Six. This should really come as a surprise to approximately no one, considering LiLo’s track record, but in case you missed it, she and her reported ex got into a knock-down, drag-out fight over the weekend, which consisted of heavy social media bashing (Lohan), the reveal of a possible pregnancy (Lohan), and, potentially, sleeping with a prostitute (Tarabasov), though that last one was just an accusation on Lohan’s part via an incoherent Instagram ramble, so probably not.

Lohan wrote a novella on her IG yesterday about the situation, in which she said many things. “I am taking time for myself with good friends,” she said, which, for Linds, means hanging out on a yacht in Sardinia while Tarabasov moved his stuff out of the apartment they were sharing in London. She apologized for her outburst over the weekend, and resolved to focus on the positive, being sure to mention her good heart. “I am sorry that I’ve exposed certain private matters recently … I should have been more clear minded rather than distract from the good heart that I have.” Here’s a screen-grab, because it’ll probably be deleted soon, just like most of the things she’s posted lately: 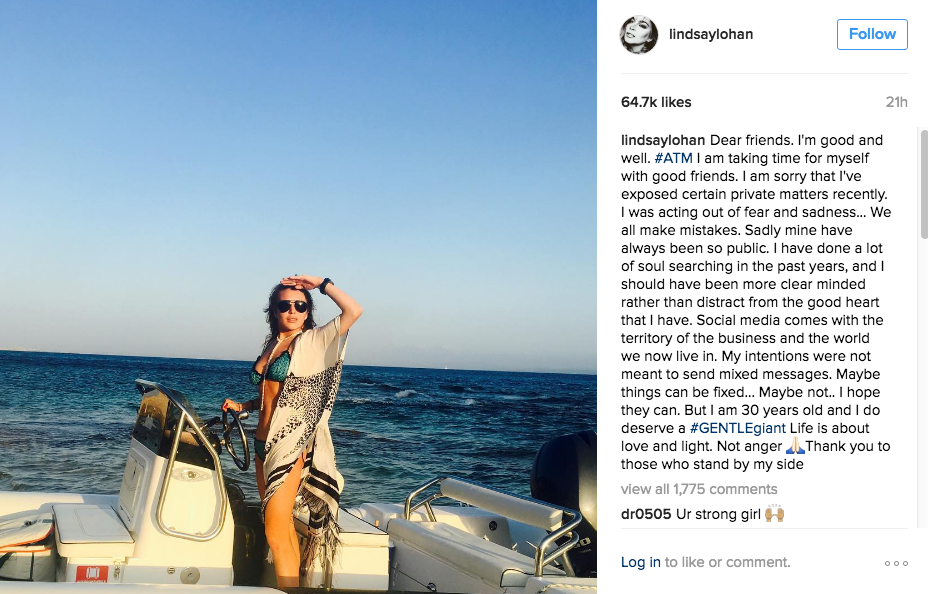 As to the whole pregnancy thing—well, does she look pregnant to you? That being said, this could easily be an old pic, and her dad—ever-reliable font of information—told Inside Edition that he has “no reason not to believe her.” According to him, Linds told him that she’s pregnant. “She is my daughter. She hasn’t lied to me. She hasn’t misled me. I go on what she tells me,” he said.

Whether she actually told him this, or whether he monitors her Instagram account closely—well, that’s up for debate. If you want to feel really sad, The Sun posted a disturbing video from the weekend, which allegedly shows the duo in a seriously horrible fight. Be forewarned, though: It’s awful, and it’s no small wonder they broke up. For now.