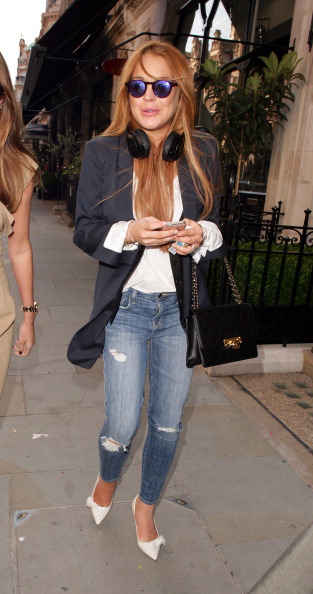 Dude, get it together already. (Getty)

Oh man, add another make-you-cringe issue to Lindsay Lohan‘s ever-expanding list: It seems the starlet’s credit card was publicly declined over the weekend.

According to the New York Post, Lohan was hanging out at nightclub 1Oak in The Hamptons (a marvelous place for a supposedly recovering addict, no?) last Saturday night when her plastic was rebuffed after she tried to pick up the $2,500 tab for her table and bottles of vodka (that was nice of her!)

“Lindsay freaked out when her card was declined,” a source told the Post‘s Page Six. “Her friends and others in her group had to chip in to cover the bill.”

Honestly, despite being famous (infamous, at this point?) it’s not hard to see how the 28-year-old could be having money woes. Apart from her recent docuseries for the OWN network, her last big project was 2004’s “Mean Girls.”

Since then, she hasn’t had much legit onscreen work, instead making headlines for her partying, her arrests, her handwritten lists of alleged sex partners, her stints in rehab, and other sundry offenses, like her chronic kleptomania and cutting up designer dresses.

She will, however, get a second  (ninth?) act of sorts on September 24, having been chosen to make her stage debut in a London production of David Mamet’s Hollywood satire “Speed-the-Plow.

Considering Lohan’s reputation for showing up late or not showing up at all to movie sets, it’ll be interesting to see how she handles the famously demanding act of starring in a live piece of  theater eight shows a week. Here’s hoping she shows up—she’ll need those paychecks to pay for more nights at the club.