Lily Rabe read your theories about her Undoing character. “I loved that she was in the hot seat,” she tells StyleCaster. “Every single person was questioned. No one was safe, even when you thought you knew.”

Rabe starred as Sylvia Steinetz in the HBO miniseries, which is based on Jean Hanff Korelitz’s 2014 book about a psychologist whose husband goes missing after the murder of a young mother at her son’s private school. Many viewers (including Korelitz herself) suspected that Sylvia was the killer, but Rabe never doubted her character’s intentions.

“I wasn’t ever suspicious of her. I knew her intentions. This is not to say that she only made good decisions or only the right decisions, but I knew her heart and where her loyalty ultimately lied,” she says. “I don’t know anyone who stuck with the same theory throughout the whole viewing experience. There was a lot of ping ponging of those theories. I get why Sylvia was questioned. But ultimately, I’m glad that it wasn’t her. This female friendship, when it’s good, can be the greatest thing in the world. I’m glad that I was playing a woman who ultimately was going to stand by this woman she loved.”

However, The Undoing, which is executive produced by Bruna Papandrea, isn’t the first time Rabe’s character has been suspected of murder. She also stars in Amazon Prime’s Tell Me Your Secrets, in which she stars as Emma Hall (once known as Karen Miller), a woman who is arrested alongside her boyfriend for the murder of nine women but claims she doesn’t remember any of it. The show, which premiered in February 2021, flashes back and forth between before Emma’s arrest and after when she’s put into the Witness Protection Program as a chance to start over.

“I was really hooked by the murky and all these morally complex characters. In the beginning, you don’t really know who’s a villain or a hero,” Rabe says. “As a viewer, I love watching shows like that where everything is in the gray.”

Ahead, Rabe talked to StyleCaster about season 10 of American Horror Story and what it was like to star alongside her partner, Hamish Linklater, who plays former serial killer John, in Tell Me Your Secrets. 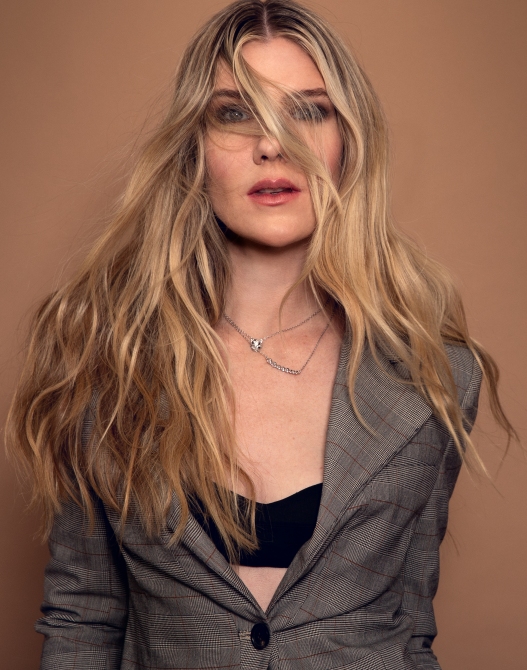 On knowing more than her character in Tell Me Your Secrets

“Playing this part, the more I knew, the more I could forget actually. I knew a lot. Then it was the process of calibrating it for both women and eing able to let go of what I knew because there’s a struggle for Emma to remember. On top of that, it’s not just that she can’t remember. It’s that, because of the betrayal that has happened to her, her sense of reality and what is true has been destroyed. Even when she does remember certain things, she doesn’t trust herself to remember them. She’s deep, deep, deep into the murk of her reality. It’s just incredibly unknown. I feel like I just said ‘Into the Unknown.’ I was trying to get around quoting Frozen, although I’ll quote Frozen any time. Everything has been called into question, including her own sense of things. There’s nothing more painful to not be able to trust your own judgement of something because it’s so shattered.”

On how her partner, Hamish Linklater, was cast.

“I was cast first and Bruna called me and was like, ‘It’s so wild. I knew you were together of course, but no one else in the room did. We were talking about our dream people for this part and everyone started talking about Hamish.’ Bruna said at a certain point, ‘You know they have children and a family.’ Everyone was just shocked. When they were just sitting around in the room, dreaming about their ideal person to play the part, it was Hamish. He just happened to be a person I’m very close with in my life. But we’ve had a lot of luck being cast opposite one another. We were cast opposite each other in a lot of plays. Hamish was always like, ‘It’s because I’m so tall.’ We’re both really tall and you can’t cheat height on stage. But then as time has gone by, we’re also creating the opportunity to work together because we really love it. But this actually was just luck.” 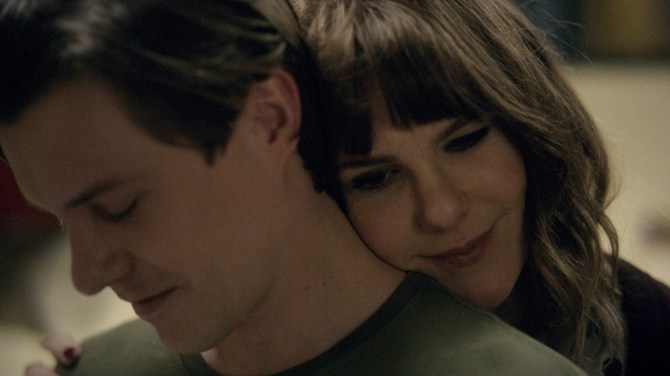 On how often she and Hamish talked about the show

“It’s interesting because we never talked about not talking about it. I think because we both have similar instincts, the less we said the better. As you can see now by the structure of how the show is, most days I was working and he wasn’t or vice versa. We didn’t get into it. I think we just both knew that the less we talked about it, the better it would be when we finally had those scenes together. We did have a pool table in the house we were renting, and once we knew we would be playing pool together, we started playing pool up there. That was sort of as close as talking about it that we would be doing.”

On Emma and John’s fight scene in the finale

“I love to do my stunts whenever I possibly can. We had doubles but they didn’t use any of it. It’s all us. With Hamish, because we have done so many plays together, there’s tremendous trust. I remember we had to this crazy dance in a play where he had to swing me around and throw me up on his shoulders. We’re both very tall people. He’s very strong and I knew he wasn’t going to drop me. Having that built-in trust allowed us to go further. There is no person I’m more comfortable with. Because we’ve done all this stuff together, there’s that great shorthand of where you can say, ‘I think you can move your arm over here or do this or move this to put more weight into here.’ We never had to be careful with one another in terms of talking about that.”

On season 10 of American Horror Story

“I’m loving this season. It’s already one of my favorite seasons that I’ve done of this show. I’m just excited for people to spend time with these characters and with these relationships. It’s some of my favorite writing of this show. I’ve always loved the writing. I can’t say anything except I can say I’ve loved them all, but this really is already one of my all time favorites.” 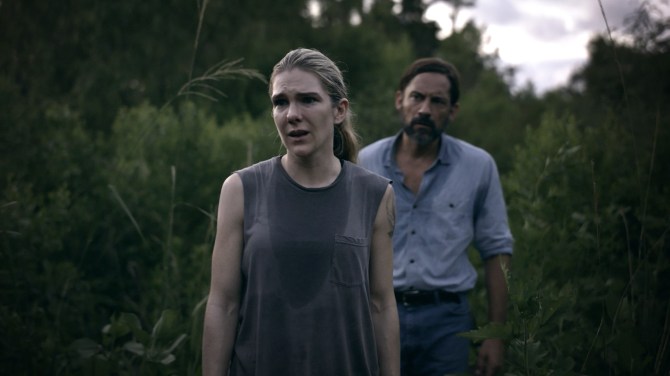 “I didn’t even know shows could go for a decade. When Ryan [Murphy] first called me, it was to do three episodes in season 1. I was doing a play in New York and I was entirely unavailable. He was like, ‘No, we’re going to make it work. When is your day off?’ I was like, ‘It’s Monday.’ And he was like, ‘Great. We’ll shoot all of your stuff on Monday.’ And he did. Ryan Murphy is the only person in the world who could make that work. I was flying after my matinee on Sunday to shoot all of my Nora stuff on Monday and I got on the redeye to do my Tuesday show. Those three episodes turned into nine episodes. I was able to be on both coasts at the same time. Then Ryan asked me to do season 2, and at that point, I was like, ‘I should just live in L.A. for this season.’ I can’t believe it’s been 10 years. It feels surreal. In a way, because of the structure of the show and each season we are telling a new story, it feels so new every year. It’s like repertory theatre where you’re with this family of the crew and the actors and we’re telling this new story. It’s not this thing where it’s like, ‘Oh gosh, we’ve been doing this for such a long time.’ It doesn’t feel that way at all. It always feels so new and so exciting.”

On the possibility of Tell Me Your Secrets season 2

“[Executive producer] Harriet [Warner] and I are very close and we talk about everything. We were in close contact throughout shooting the show, and something that would come up were these ideas she would have for season 2 and where her mind was going when we were shooting. With a limited series structure, something that’s so wonderful is you can end the story and it feels complete in a way but there’s also this potential for more. I think both those things are true at the same time. I know some of the possibilities of the things that could happen. My gosh, I loved working with Harriet and Bruna and this cast. There are a lot of wonderful things to come back to. I also think if it ends here, it is a complete story too. It’s always better to want more. We don’t want to be on a show that’s like, ‘I know everything there is to know about this person. There’s nothing more to know.’”

Tell Me Your Secrets is available to stream on Amazon Prime.