As many of you may know, I was simply not a fan of the wardrobe in Emily In Paris. I’m a Patricia Field stan, and I truly believe it was a case of very intentional styling—Emily is annoying AF, and therefore, it’s no surprise her wardrobe is too loud, too trendy, too much. Fortunately, the same can’t be said for Lily Collins’ Golden Globes look, which I totally loved.

I tend to enjoy Collins’ red carpet style, which is more often than not a ladylike gown with a dreamy a-line skirt. However, in Emily In Paris, the show for which she’s nominated, Collins wore everything from poorly-mismatched prints to (shudder) berets, and her commitment to the role and its meh wardrobe paid off. Collins received a nomination for Best Actress in a Musical or Comedy TV Series, alongside actresses including Kaley Cuoco, Elle Fanning, Jane Levy and Catherine O-Hara.

Of course, this year’s Golden Globes weren’t quite the same as they’ve been in years past, due in large part to coronavirus restrictions. Hosts and presenters appeared live to read off categories and winners, but the nominees stayed home, left to wonder if they’d win from the comforts of their couches. Only when they cut to the stars’ homes could we see outfit sneak peaks. 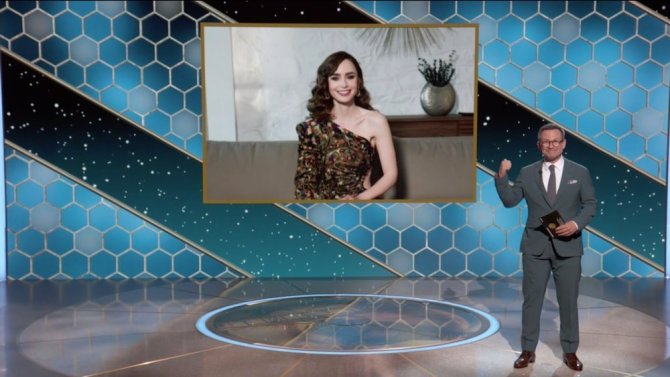 Which brings me to Collins’ Golden Globes look—I could only see the top part of her gown thanks to her nominee video call-in, but I could tell it was a good one, and these photos from Saint Laurent tell the full tale. This is Collins’ second time at the Globes, so talk about making an impact! She was only on the screen for a moment, but the internet was still lighting up over this outfit—and for good reason! Collins stunned in her colorful, one-shoulder gown.

While I loved the overall silhouette, the part I liked the most was the daring cutout on the side. And if the dress wasn’t stunning enough, Collins also donned a pair of bold gold hoop earrings, a blingy cuff bracelet and a matching ring. Her beauty look matched her disco-inspired vibes, with voluminous curls, a brown smokey eye and a deep blood-red lip. 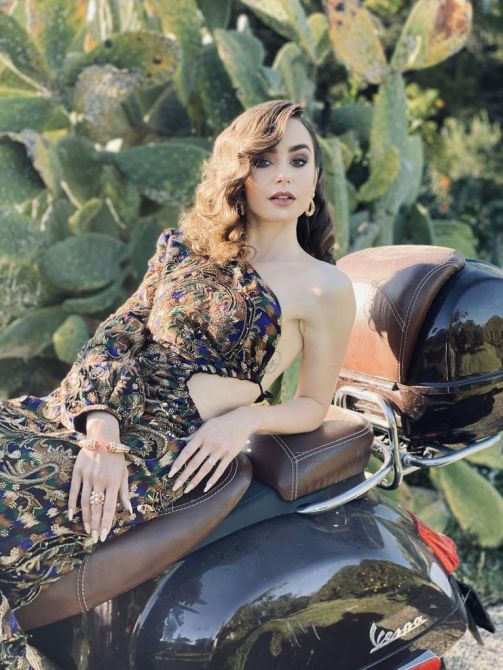 Personally, I’m a fan of the look, but again: Anything beats her Emily In Paris wardrobe. That said, I’m not the only one excited to hate-watch the show when Season Two rolls around. EIP was approved for a second season back in November 2020 and although fans don’t know filming deets due to pandemic restrictions, we’re all hoping to make fun of Emily again very, very soon.

Until then, I’ll settle for cheering on the lovely Lily Collins. You looked fab, babe!