Lilly Singh does not like sitting still. But she recently sat down with us to discuss the important stuff—ikTok-ing with Vice President-Elect Kamala Harris, why she will never teach her parents Zoom and why being a “brown, queer” late-night talk show host is simply not enough diversity for her. Lilly also revealed why season one of her talk show, A Little Late With Lilly Singh, did not feel authentic to her, and why the second season will be different. Also, she confessed that Harris’ election as Vice President has made her feel like she’s a part of American politics for the first time. And she’s from Canada, so that’s saying a lot!

Lilly’s been a vegetarian for 12 years. Why? Her parents didn’t pressure her, as many people assume. She puts it simply, “I chose to be a vegetarian because I felt if I don’t have to eat another animal to survive, I prefer not to. I don’t think my life is more important than other animals, but that is my own personal journey.” Becoming a vegetarian is not as hard as people make it out to be, Singh says. In fact, she decided to partner with Lightlife, a plant-based protein brand, on their “Clean Break” campaign so people could see how easy it is. “People think it’s a very hard thing to do and it’s very not. It’s quite enjoyable. I love the food I eat. And they have simple ingredients that you don’t have to Google,” she says.

What’s the weirdest thing Lilly has learned about herself in the last few months? “This is weird. And also perhaps scary and sad,” she begins. Uh oh. But then she revealed she’s a workaholic and is very uncomfortable when she can’t do anything. Sitting around and doing nothing is not for her. “It’s weird, I wasn’t able to sit. When I sat for too long, I’d say, ‘Oh, you know what? I should re-organize the pantry, let me make a mood board. I have to treat everything like a project. So I got very agitated sitting at home doing nothing. And I’m a weirdo.” Weird? No. A workaholic, yes. Maybe the workiest holic out there.

FaceTiming with her Parents

As for how she’s been communicating with her parents in these strange pandemic times. “I would not even remotely attempt to try to teach my parents Zoom, that sounds like an absolute nightmare that I would want to not ever do.” But how does she really feel? So how do they communicate? FaceTime. And it’s not easy. In fact, Lilly says they argue every time for five minutes about the same topic: Who has the worst Wi-Fi? “I know for a fact it’s not mine, I know it’s my parents’ Wi-Fi,” she says getting riled up as if her parents are on the call. But her parents come back at her with #facts. She impersonates them, “The people came, and they said we have “best Wi-Fi! They did the test.” But Lilly says no. No Mom and Dad Singh. Your Wi-Fi is the worst and she’s sticking to that.

Zoom for the Holidays?

Since she can’t see her family in person, as she just went back to work on season 2 on her show, Lilly suggested to her family they do a family trivia Zoom night for the holiday, but her mother and aunt quickly shut that down. “No. They just rejected me.” So they’re doing nothing, but fighting about Wi-Fi on Facetime. When I suggest she teach them how to Zoom, and make a video of it, to benefit all kids who need to teach their parents about technology, Lilly says, “Maybe one day, if I have a lot of, lot of, lot of time. I’ll try.”

In October, shortly before the election, Lilly threw on a Kamala Harris suit and sneakers and did the WAP Challenge on TikTok and added some Bhangra to it. I revealed to her that my family tried to recreate her dance over Diwali. And it was a Diwali disaster. We failed so badly that my family asked me not to dance. Lilly quickly interjected, “I don’t believe in bad dancers.” LOL, Lilly. Hi. Nice to meet you. The only way I’m a good dancer is if your eyes are closed. 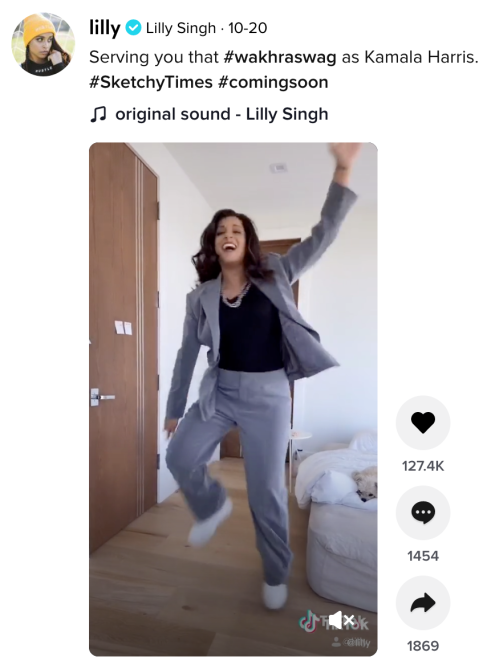 Aunty Kamala Harris is about to be in the house. The White House. And what does that mean to Lilly? “I’m a Canadian, who’s living in L.A., and I’ve never really felt included in the conversation of American politics… this is the first time I’ve felt like I could partake in the conversation. Obviously, watching Kamala on screen is very inspiring… I love the way she is unapologetically bold about who she is, especially as a South Asian woman, that is not something that’s always encouraged at a young age. I was always told don’t talk so loud, don’t speak so much. It’s really important for young girls and boys, for everyone, to see people like Kamala who look different, but aren’t afraid to take up space. And I hope she brings that to the White House. To be unapologetically, herself.”

The YouTube-star-turned-late-night-host seems delightfully unaware about how she has done the same thing as Harris. When I note to her, she’s done the same for young and older people, especially people of color in America, she humbly says, “Thank you for that, it’s always nice to have that reminder of the impact you’re making, because sometimes it is very easy to forget.”

I asked her if she felt she’d get in trouble if she didn’t call our incoming VP, Aunty Kamala (a sign of respect in many Indian families), and she said, “I don’t think we’ll get in trouble, but I think we should call her that, because I love the way it sounds, and I really want that to be a thing.” Madame Vice President Aunty Kamala it is then.

It’s really important for young girls and boys, for everyone, to see people like Kamala.

I posed a hypothetical to Lilly, what if she was made Kamala Harris’s Chief TikTok Officer? What is the first dance she would have her do after Inauguration? Before I even finished the question, she said, “I would make her do a TikTok to the song, ‘I Got the Keys, keys, keys’ (by DJ Khaled, Jay-Z, and Future) as she steps into the White House and she gets access to everything we’ve never gotten access to.” Many people have criticized Harris and Alexandria Ocasio-Cortez for dancing. But more dancing in DC wouldn’t be a bad thing. This ain’t no Footloose town people, and we couldn’t be happier. Personally, I hope Lilly is given this very important cabinet position and makes Biden Bhangra.

Diversity Behind the Scenes on A Little Late with Lilly Singh

“If you were an executive somewhere, that’s a very easy box to check. ‘Our host is a brown woman, who’s queer, yay we check all the boxes!’ But for me, that’s not enough.” A Little Late with Lilly Singh has already broken many barriers—mainly she is the first South Asian woman as a late night TV host. “For me it’s very important for everyone behind the scenes to also be given a chance. So my writers room is two, three Desi people, one of our writers is in Canada.” She goes on to explain that Zoom has allowed them to bring in people from all around.

“I’ve gotten to find talent that is just the right voice for the show. Our writers room is very diverse, not for the sake of being diverse. Because these people capture my voice the best.” She opens up and says season one, there were many challenges that made her not feel like herself.

“In season one, that was a huge hurdle. I was still learning how to be my authentic self while learning this late night game. And admittedly, I wasn’t always authentically myself, because I was just so overwhelmed. In season two, I think I have conquered that. I’m making decisions about bigger things that I wasn’t involved in for season one. I want to make sure across the board it’s my authentic vision, which is a diverse one.”

The second season of A Little Late with Lilly Singh show comes out January 11, 2021 on NBC, and Lilly recently posted a TikTok dance with the following caption, “I can’t wait to bring my full authentic self to this show, improve and finally break the norm.” Consider the norm broken, Lilly. She might not realize it, but Lilly Singh broke the norm a long time ago.

A Little Late with Lilly Singh is available to stream on Peacock.