As a cast member on Riverdale, there’s no doubt Lili Reinhart is successful. But is she millions-of-dollars-worth successful? Google apparently thinks so.

Over the weekend, the 22-year-old actor took to her Instagram to fact-check what Google wrote about her net worth. In a screenshot of the results, Google reports that Reinhart is worth $2 million and makes $300,000 per episode on Riverdale. The results were sourced from the site, ArticleBio, which doesn’t exactly reveal where its information came from.

MORE: Kylie Jenner Net Worth: All the Ways She Makes Money 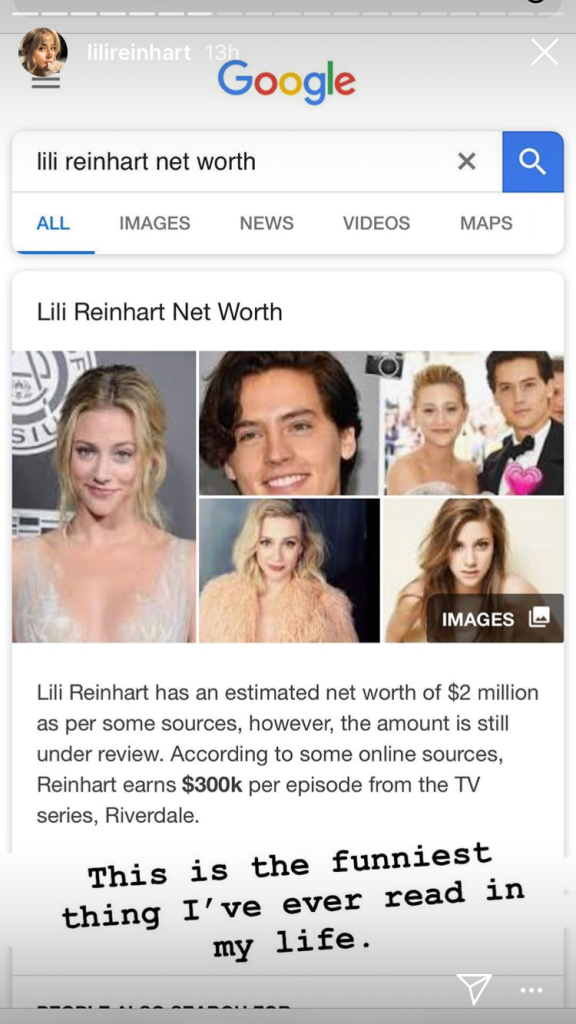 MORE: Kris Jenner’s Staggering Net Worth &amp; How She Built Her Massive Empire

However, the numbers looked a little (or a lot) off to Reinhart, who posted a screenshot of the results on her Instagram story, with the caption: “This is the funniest thing I’ve ever read in my life.” It’s unclear what Reinhart’s actual net worth is, but in comparison, Variety reported in 2017 that This Is Us‘s Mandy Moore and Milo Ventimiglia made $85,000 per episode, The Handmaid’s Tale‘s Elisabeth Moss made $200,000 per episode and Scandal’s Kerry Washington made $250,000 per episode—all of which are under Reinhart’s reported salary.

Riverdale is one of The CW’s most successful series, so perhaps Reinhart does make big bucks from it. But judging from her reaction, Google’s predictions are nowhere near close to her actual paycheck.