“It’s OK. I forgive him,” Liane V says, standing in a parking garage on the phone with a friend. “Everybody gets cheated on.”

Her tone is upbeat and cheerful. The subtle nod of her head suggests a “What can ya do?” ambivalence. For a split-second, you believe her, until the camera pans out to show her ex-boyfriend tied-up in his underwear in the trunk of her car.

“No, I haven’t seen him,” she says, closing the trunk and muffling her ex-boyfriends screams. She turns to the camera and smiles. One-and-half million views later, a star is born.

Liane V (whose last name is Valenzuela) credits the six-second video for her rise to social media stardom, a nine-year struggle resulting in more than 12 million social media followers, multi-figure deals with brands like Target and G by Guess, and the ability to put her parents into retirement. “One of my biggest goals in life was to have them stop working and to take care of them,” Valenzuela says.

And though it might seem like Valenzuela’s success can be summed up by the click of a button, she assures that her job and journey are far from “easy.” “A misconception people have for us influencers is that they think it’s easy, and it’s not,” Valenzuela says. “You’re literally your own business and people don’t understand. They’re like, ‘Oh, you just shoot stupid for fun.’ It’s not. It’s a lot of work.” 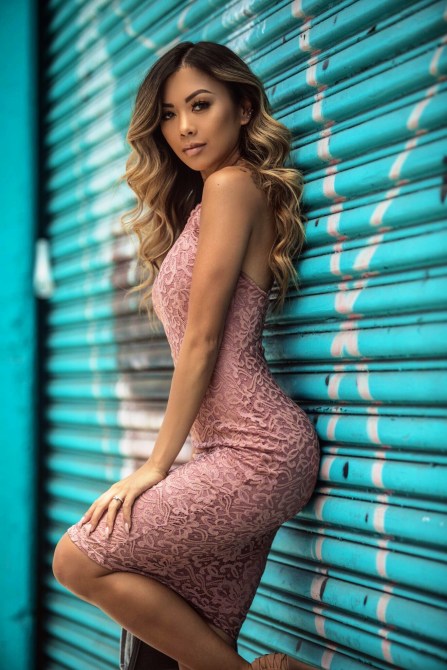 Raised in Modesto, a small city in central California, Valenzuela, the youngest daughter of two Filipino immigrants, grew up with dreams of becoming a star. She learned of her comedic chops early on after entertaining guests day in and day out, and watching her dad impersonate celebrities like Elvis around the house.

“My house was the hangout spot. I literally was never alone,” Valenzuela says. “My mom was like, ‘Man, one friend comes and another one leaves.’ I always loved having company and entertaining people.”

At 18, after years of taking dance and singing lessons and honing her performing skills at events hosted by her family’s DJ company, Valenzuela told her parents about her plan to forgo college and move to Los Angeles. Initially, the conversation didn’t go over well. “Surprisingly, Filipino parents are strict,” Valenzuela says. “They were like, ‘You have to go to college. Both your sisters went to college and graduated.’”

After reaching a standstill, Valenzuela’s parents allotted her four years to make something of herself in L.A. before she was forced to attend college. “I was like, ‘Mom, I don’t want to go to college. I want to go to L.A. and focus on being a star,’” Valenzuela says. “They’ve seen me grow from a little girl to graduating high school having that same passion and drive, so they were like, ‘OK. We’ll treat this like a college. Go to L.A., and we’ll give it a few years, and if things don’t start going toward that, then you need to go to college.’”

Valenzuela moved to L.A. in 2006, years before Instagram, Vine, and even smart phones. During the day, she worked at a car dealership in Burbank, a small city outside of L.A., to make ends meet. At nights and on weekends, she took acting and dance classes, dabbled in red carpet hosting, and sang backup for artists like Dev. “I was really just trying to get my feet wet in the industry,” Valenzuela says. “Before social media, it was just the work that you put in and showing your face.”

I never knew you could make a career out of social media.

After about nine years of grinding, Valenzuela befriended a few YouTube sensations, who encouraged her to create an account. After posting “cheesy cover videos” (all of which are now hidden), Valenzuela eventually moved onto Vine, a new six-second video platform, where her following really took off. “I knew social media was an important factor and I knew that everyone was like, ‘If you want to succeed in your career, you need to build your own audience,’” Valenzuela says. “I was like, ‘OK. I guess.’ But I never knew you could make a career out of it.”

Within a few months, Valenzuela’s Vine account, known for its viral skits about cheating boyfriends, hip parents, and awkward street encounters, racked up a million followers. “I was like, ‘This is insane how everyone really likes Vine,’” Valenzuela says. “Before, it was more a hobby and something for fun, and then it became a big deal.”

Not too long after, Valenzuela scored her first social media brand deal, resulting in a four-figure check and the confidence to quit her car dealership job and commit to Vine full time. “I still have that check at home and I could not believe I made a couple thousand for a six-second video,” she said. “I was like, ‘Yo, I was working at the car dealership for a week and didn’t even make this kind of money.’ Even a hundred dollars, I was like, ‘Hell yeah! I got paid.’”

Before social media, it was just the work that you put in and showing your face.

Anticipating the end of Vine, Valenzuela, along with a few other influencers, left the platform long before its decline in 2017. Using followers trickled into her Instagram and YouTube, Valenzuela established herself as more than a six-second fad. “I honestly didn’t like Vine,” Valenzuela says. “I thought Vine was pointless. Six seconds? What could I do with six seconds?”

She started expanding her fan base beyond viral comedy sketches. She began sharing lookbooks, makeup tutorials, and hair videos, with the hopes of proving herself as a threat in the beauty and fashion industry as well. In early 2017, her wishes were heard when she was approached by Guess founder, Paul Marciano, who offered Valenzuela a fashion line with G by Guess after meeting at a runway show in Italy.

The line, in stores and online now, features holiday-appropriate garments like a silver metallic jumpsuit (Valenzuela’s personal favorite) and a one-sleeved lace maxi dress. “If you’re going to holiday parties, you’re probably going to eat a lot. I wanted to make it so all the material is stretchy and soft,” Valenzuela says.

This social media era, people have to adapt. There’s change.

Aside from giving her her big break in the fashion world, Valenzuela also credits Marciano as a pioneer in the fashion industry’s growing respect of social media models and influencers. She recalled a recent runway show in Italy where almost every model Marciano cast was found on Instagram.

“For him to really see that social media is the move, it’s amazing,” Valenzuela says. “A majority of his models are from Instagram, and he knows each and every one by name. He even brought up a few social media influencers to talk on stage, and I was was one of them. Social media has changed so many people’s lives.” 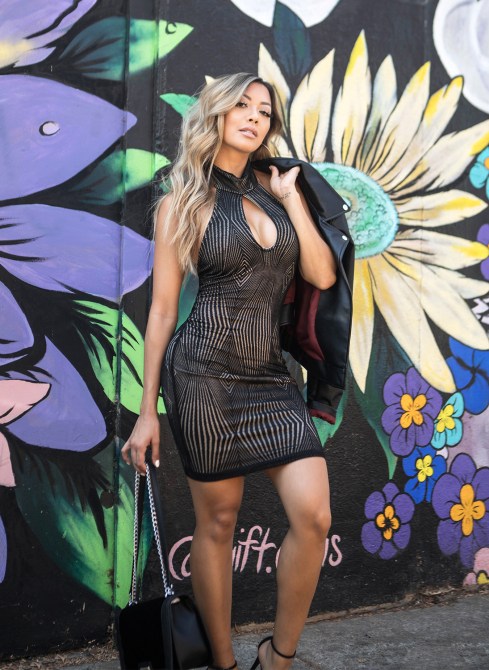 But that doesn’t mean everyone is on board with social media’s takeover. Valenzuela admits that she receives hate comments daily from people who criticize her skits and minimize the seriousness of her career. “A lot of people are like, ‘Oh, she’s not funny. I forgot to laugh. That’s stupid.’ All I have to say is this generation is a new world,” Valenzuela says. “This social media era, people have to adapt. There’s change. There was once a time when reality stars weren’t taken seriously and now they’re also very popular. Regardless of what people think, this is what it is.”

Valenzuela’s belief in social media is why she has a zero-tolerance policy for people who call her job “easy.” “I’ve spent hours losing sleep, editing, and writing scripts,” Valenzuela says. “We’re creating our own movies. We have our scripts. We have our scenes. We have to battle with getting kicked out of the grocery store because we want to shoot something really quick and we do it anyways because we don’t want to pay for a permit. But we do these crazy things to get content for people to enjoy and it goes viral.”

Despite her millions of followers, multi-figure brand deals, and internet fame, Valenzuela still believes the most rewarding part of her job is being able to make people laugh. “I feel like people follow me because they look at me like them and they’re like, ‘Oh, she’s just like me! That girl from Modesto. She hangs out with her dad and her friends and they make silly videos,’” Valenzuela says. “Making people laugh is a powerful thing. If you can make someone laugh or smile, they look forward to you. You’re their positive thing in the day.”