Over the weekend, Liam Hemsworth and Miley Cyrus announced they were splitting up. Fans across the world expressed their thoughts, concerns and love for the couple. Now, Liam Hemsworth’s reaction to his split with Miley Cyrus is making us so sad. After ten years together–on and off– the couple tied the knot with a secret ceremony in December. Just eight months after the nuptials, they’ve made the presumably extremely difficult decision to end their marriage.

Cyrus has been on an Italian getaway with Brody Jenner’s ex Kaitlynn Carter.  Hemsworth, on the other hand, returned hung out with his big brother Chris Hemsworth in Australia. Apparently, while roaming the streets of Byron Bay, The Daily Mail approached Hemsworth for a comment. As he attempted to avoid the conversation, he said, “You don’t understand what it’s like. I don’t want to talk about it mate.” So. Sad. In the photos that accompany The Daily Mail’s report, Hemsworth definitely looks down. But uh—can you blame him? We should leave the poor guy alone right now. And that goes for Cyrus too. The two are handling the split in their own, very different ways, and they should be allowed to do just that without scrutiny from anyone. They don’t owe anyone an explanation. That said, Cyrus’ reps did comment on the breakup when the news broke on Saturday, August 10.

The reps told People Magazine, “Liam and Miley have agreed to separate at this time. Ever-evolving, changing as partners and individuals, they have decided this is what’s best while they both focus on themselves and careers. They still remain dedicated parents to all of their animals they share while lovingly taking this time apart. Please respect their process and privacy.” 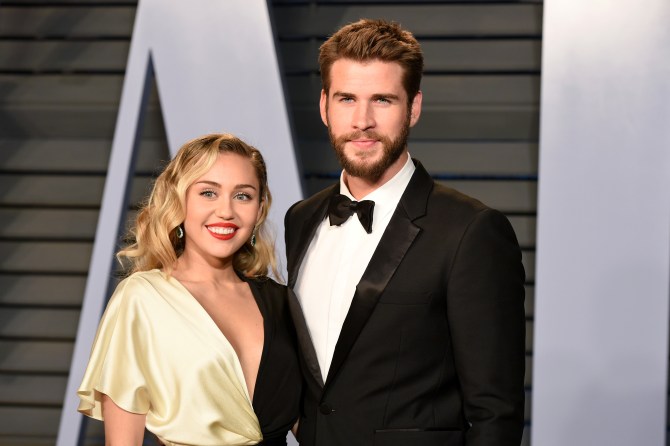 We’re not crying, you are. Cyrus took to Instagram after news of their separation broke. While she didn’t explicitly address the split directly, her words can definitely relate to this moment and many other difficulties we face in life.

“Don’t fight evolution, because you will never win. Like the mountain I am standing on top of , which was once under water , connected with Africa, change is inevitable. The Dolomites were not created over night, it was over millions of years that this magnificent beauty was formed,” she wrote before adding, “My dad always told me “ Nature never hurries but it is always on time”…. it fills my heart with peace and hope KNOWING that is true. I was taught to respect the planet and its process and I am committed to doing the same with my own …. 💙”

Twitter has a lot of thoughts on the split…take a look.

There are celebs like Jennifer Aniston and Blake Lively who stick to a signature look, and then there are the fickle ones who just cant stay out of the salon. Join us as we follow Miley Cyrus as she goes from fresh-faced pre-teen to No. 1 on Maxim's Hot 100 with almost every look in between.

2006
A fresh-faced Miley begins her stardom at 14. Try on Miley Cyrus' hairstyles in the Try On! tool

Of course, how can we forget the child stars breakout role: her blonde alter-ego Hannah Montana? Try on Miley Cyrus' hairstyles in the Try On! tool

Once she began to hit it big, Cyrus started sporting extensions and highlights. Are Hair Extensions Going Out Of Style?

The young actress went darker while promoting her newly released DVD Hannah Montana - Behind the Spotlight in 2007. Try on Miley Cyrus' hairstyles in the Try On! tool

Miley stepped out with much lighter highlights at the 2007 AMAs. Top 10 Celebrity Highlights

She chose to sport not only dark hair but darker makeup as well for her Best of Both Worlds LA premiere. How To Go Dark With Your Hair Color

Around the time Cyrus released her album Breakout she modeled auburn curls. The Easiest Way To Makeover Your Hair Color

With her Disney career in the past, the singer looked a lot more grown up with long, side swept bangs. Try on Miley Cyrus' hairstyles in the Try On! tool

Cyrus made a break with her youthful image by working this sexy, smoldering look during the 2012 Billboard Music Awards. 10 Ways To Instantly Look Sexy

One of the most dramatic style transformations of the past few years was when Miley decided to bleach and shave her hair. She debuted her new look on the red carpet at the MTV Video Music Awards. Platinum Blonde Hairstyles

She styled her hair in a more feminine pixie while visiting a childrens hospital. Why Celebrities Love Balayage Highlights

Miley rocked spiked hair and dark roots at the 2013 punk-themed Met Gala. Pink And Other Celebs Go Back To Their Roots

Miley proves she can be hot without a long full mane when she is named No. 1 on Maxims 2013 Hot 100 list. Try On Miley Cyrus' hairstyles in the Try On! tool

BTS' V's 'Winter Bear' Music Video Has Us So Overwhelmed