In case you’re in need of a little extra incentive to hit the polls (or request that mail-in ballot) this year, Levi’s 2020 Vote Campaign should do the trick. Hailey Bieber and Oge Egbuono have teamed up with the denim brand to help educate and encourage everyone to vote in the upcoming election. Along with scholars, activists and organizers (including Jaden Smith and Ross Butler!), Levi’s has released a Vote Campaign and Public Service Announcement—along with some seriously cute merch—to spread awareness.

You can thank street style maven and activist Hailey Bieber in part for this incredible campaign, too. She was recently inspired to fight for voter rights and encourage voter registration, and brought the idea of creating a special PSA to Levi’s. Emerging filmmaker Oge Egbuono immediately jumped in to help, starting with researching creative and effective ways to call young people to action—and, ultimately, get them to the polls. With over 70 million young eligible voters this election, Bieber, Eguono and Levi’s knew they had to create something truly compelling—and they definitely did just that.

“I had a vision to put together a beautiful and powerful call to action to educate and inform the next generation of voters, and to me Levi’s felt like the perfect team to partner with on this,” says Hailey Bieber. “Oge is an incredible force and she really helped me bring my idea to life. This election to me is the most important in my lifetime and I’m at the age now where I truly understand the impact my generation and the next has. My hope with this call to action is that it would encourage, educate and inspire this next generation to vote in November and to understand why it’s important.”

In addition to the inspiring PSA from Levi’s, Hailey Bieber and Oge Egbuono, is doing even more: including a live social media series, #UseYourVoice. The series will feature activists, organizers and scholars who appeared in the PSA in an effort to remove barriers and make access to the polls easier for everyone.

Plus, Levi’s has released a new capsule collection of items encouraging you—and everyone who sees your ‘fits—to get out there and vote this year. Hoodies, tees and even custom pieces are available to shop on the Levi’s 2020 Vote Campaign page, so go ahead and grab your favorites before the election. Together, we can make sure 2020 has the biggest voter turnout yet. 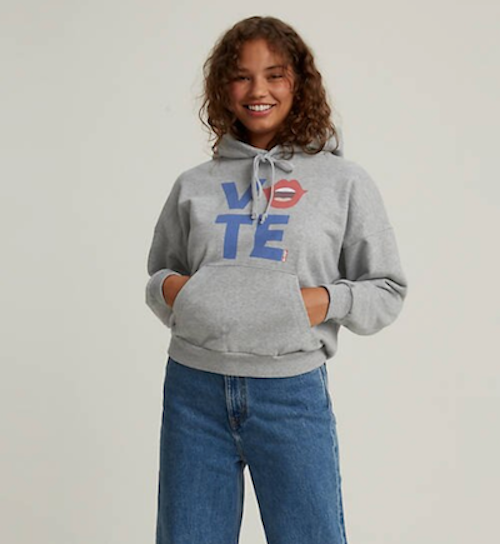 Cozy up this fall in this statement-making Levi’s vote hoodie. You’ll stay warm as the temperatures drop while reminding others to vote this year. A win/win situation. 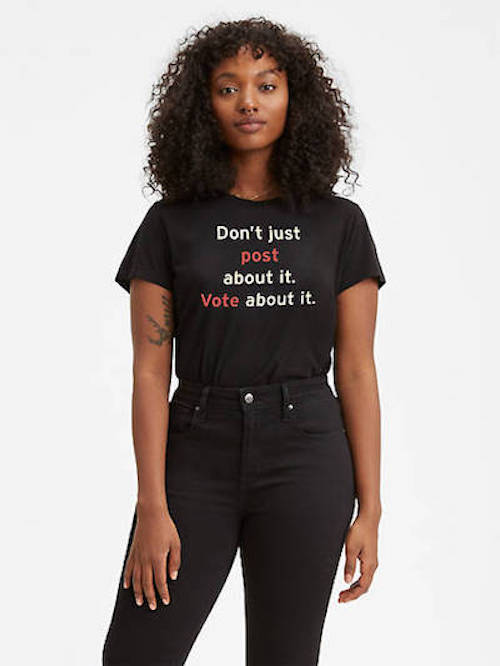 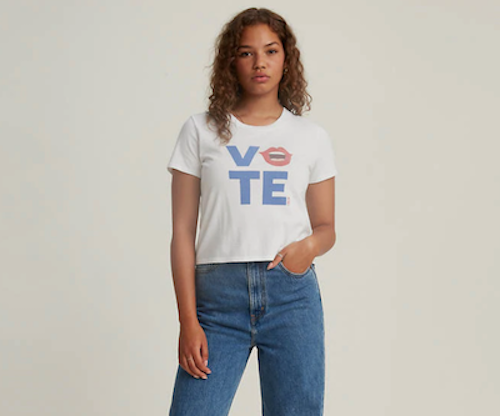 Use your voice—and your wardrobe—this year to make a different. You never know who might see you wearing this Levi’s vote tee, only to realize they need to get their voter registration finalized. The little things add up!