The unfortunate side effect of being raised in a low-income community with a single parent is the lack of access to financial literacy education that doesn’t read/sound like a foreign language. The only real piece of money advice I got as an adolescent was to save—no more, no less. There wasn’t talk of high-yield accounts, stocks, bonds, or a nest egg. I just knew that whenever I got paid, part of my paycheck should be tucked away (though I was happier to spend it on CDs and back-to-school outfits).

Fast-forward to my freshman year of college, and it was as if I’d never heard that small yet valuable tip. By the end of my first semester, I’d exhausted thousands of dollars from my only savings account, in addition to maxing out a credit card. Fast-forward a few more years and I was still paying off that credit card, dodging calls from Sallie Mae, and barely making rent. I’d been on the struggle bus for a while, y’all.

And although I’ve since gotten back to saving and paying off debts, the truth is that up until a few months ago, my spending habits were still erratic and hardly reflective of someone who wants a family and, eventually, retirement. So, shortly after entering my last twentysomething year (eek!), I promised myself I’d Get. It. Together.

Enter The Financial Gym, an affordable financial advisory company whose infrastructure is inspired by that of a gym or fitness center. Instead of a “financial planner,” you’re paired up with a “financial trainer,” who evaluates your current status and, based on your long- and short-term goals, creates a plan, or “workout,” to whip your bank account into shape—just what I needed.

I signed up for a three-month trial with trepidation, mainly because it required that I reveal all the most intimate details about my finances, including salary, an abysmal credit score, and downright scary student debt. Money is uncomfortable to talk about, but as I’ve felt the effects of unfair and unequal pay in my industry, I knew this was a small but important step for me. And since my score has jumped almost 100 points (#humblebrag), among other improvements I’ve seen, I can honestly say that this is one of the best things I’ve done in a while.

Ahead are all the lessons I’ve learned and want to pass along, with the help of my hero (and financial trainer), Crystal Martinez. Let’s get back to basics.

MORE: 5 Ways to Save Money on Makeup, According to Reddit

Saving, credit card debt, and a poor credit score are three things we twentysomethings struggle with most; especially when dealing with all three simultaneously while trying to juggle monthly and weekly spending, such as rent and groceries. Martinez says that most young adults fail to realize that not having a budget that includes monthly savings will only lead to an overdependence on credit cards for spending money that doesn’t actually exist in their bank account.

“After some time of this behavior, the credit card debt and interest charges can become too high to pay off monthly. This means they may be using too much of their available credit or missing monthly payments, which in turn affects their credit score,” she says. 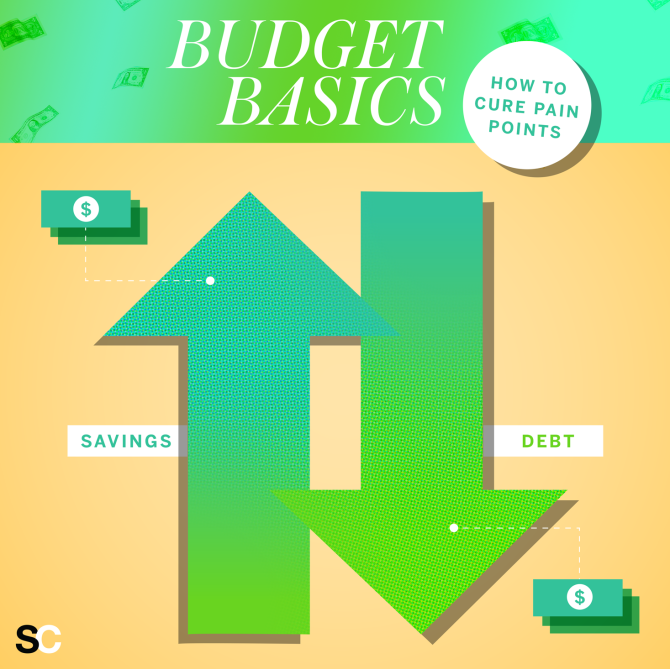 In cases like these, your focus should be on saving and paying down debt simultaneously. For example, Martinez instructed me to start by paying overdue medical bills and a tax lien immediately, while also having part of my bimonthly paycheck automatically going into a savings account. This meant I had to cut back on other things, like shopping and eating out. Eventually, I opened up a second savings account for traveling and now have a smaller amount going there, too.

“We also encourage scaling back on nonessential fixed and variable expenses, while also boosting their income through their current job, a new job, or a side hustle. This game plan has successfully worked time and time again,” she says.

Before joining the Financial Gym, my credit score had been so low for so long that I literally could not remember when it was actually good. And I think—correction: I know—a lot of people were in the same boat as me. Once that number dips to an all-time low, we think “ignorance is bliss” and ignore it … until it keeps us from the things we want, like the perfect apartment or other big expense.

First: A credit score and a credit report are two different things. 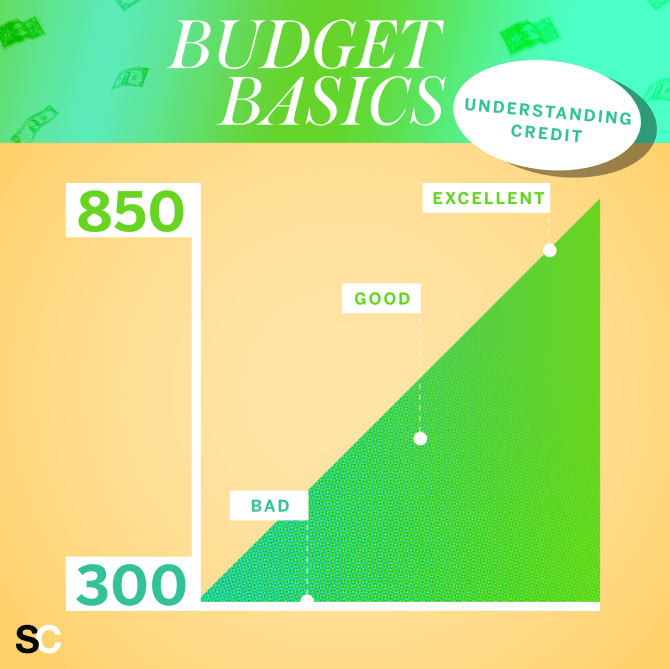 “A credit report is a detailed breakdown of all your past and current financial accounts with credit lenders over the last seven years. If you have (or used to have) a credit card or personal, student, or auto loan, for example, the report will show when the account was opened, if you made your payments on time (or didn’t) and the status of the account, such as, ‘active,’ ‘closed,’ or ‘in collections,'” says Martinez.

Your FICO credit score is an overall “grade” based on your credit report, and it falls between 300 and 850. 500 and below is considered poor, while anything above 700 is good. The benefits of having a score above 750 are “lower interest rates, higher credit limits, approval for reward credit cards, and not to mention, making you a more appealing candidate to rent an apartment or buy a home one day.” Martinez recommends thinking of your credit report like an adult report card that you should check every three to four months, just as you did at the end of every semester.

“You can receive one free credit report from each of the three credit reporting bureaus (TransUnion, Experian, and Equifax) annually, scan it for accuracy, and dispute any personal information (names, addresses, phone numbers) and accounts (auto, credit card, etc.) that are inaccurate or that are not yours,” she says. (This podcast is also a great launching pad.)

MORE: A Fashion Editor’s Best Budget and Saving Tips for a Gorgeous Wardrobe

A lesson I learned the hard way: Avoiding student loans won’t make them disappear, and, unfortunately, they can impact your credit if you don’t deal with them. “The sooner you acknowledge their presence in your life (like that annoying family friend you dread at family functions) and come up with a game plan to deal with them, the better off you’ll be,” says Martinez.

If, like me, you have loans that fall under the “federal” category, your best bet is loan consolidation, so you can have everything combined together into one monthly payment with one set interest rate. “The income-based repayment plan is also a great way to make sure that your monthly payment is in alignment with your annual salary and that you’re not paying half of your monthly income toward this debt,” says Martinez. 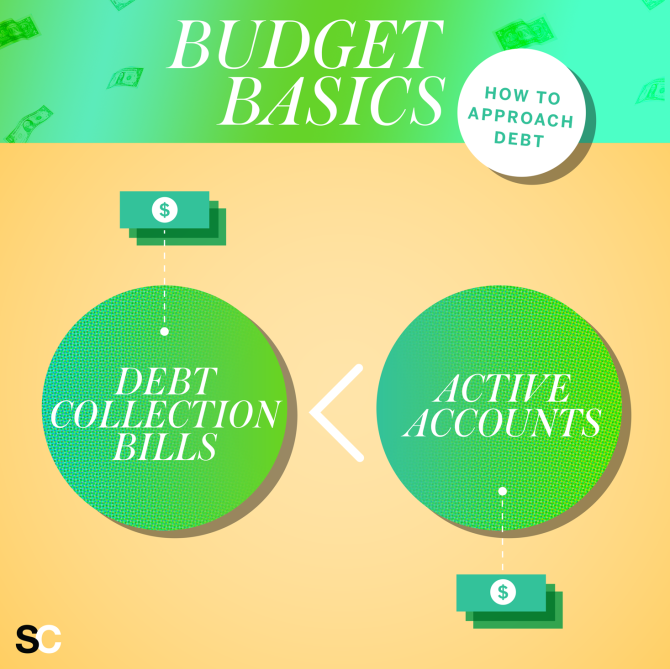 On the other hand, if you have a loan, credit card, or other item that goes into debt collections, know that it will stay on your credit report and eventually fall off after a seven-year grace period. Once an account has gone there, the damage is done and paying a collection agency doesn’t guarantee that your report’s negative status will change.

Instead of paying off those bills, Martinez recommends focusing your energy and income on the active accounts to ensure those don’t also go into collection purgatory. Eventually, your score will rebound, and you’ll have saved money in the process.

Also, remember that in the midst of your struggle, you still have rights as a consumer and are protected by the Federal Trade Commission. “A debt collector should never call you before 8 a.m. or after 9 p.m., threaten, or lie to you. If you experience any rogue collectors, take down their name, phone number, and collection agency name and report it to the FTC,” says Martinez.

Salary negotiation feels like an upward battle in general because we’re still living in a time where people feel uncomfortable talking about how much money they make. The reality is that this tight-lipped culture is part of what got us into this mess to begin with.

“In a perfect world, we would all receive that raise we deserve, but unfortunately, that’s not how businesses operate,” says Martinez. “As we learned from ‘The Godfather,’ ‘It’s not personal; it’s business.’ You should always be negotiating on your own behalf, whether you are going in for a new job or are within your current role.” 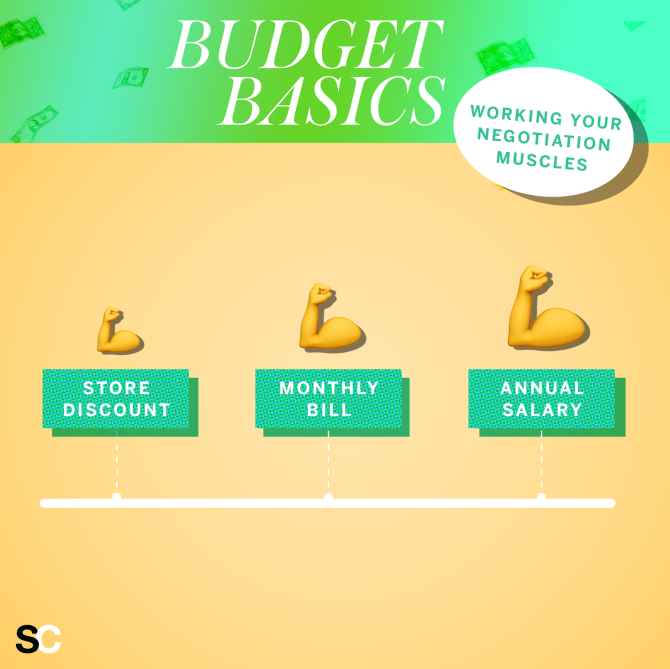 The benefits of salary negotiation are garnering cash flow for your short-term goals, like disposable income for traveling or being able to move out alone. And in the long run, it brings you closer to future plans, like buying a home and retirement.

“If negotiating scares you, take baby steps. Call your cell phone or cable provider and negotiate a lower monthly rate. If you go to a gym or clothing store, negotiate a discount,” says Martinez. “Building up your negotiation muscle will make it easier for you when it’s go-time to ask your boss for that much-deserved raise.” Negotiation is something that still terrifies me, so I practiced (and succeeded) by convincing AT&T to cut my phone bill in half. And now I feel confident about the tackling the more challenging conversations in the future.

So, what can someone—with and without a finance trainer—do to start rehabilitating their finances? Begin with an emergency savings account. This is something everyone should have. Period. Since this is money you shouldn’t be tapping into often, Martinez recommends stashing it in a high-yield savings account. Unlike a general day-to-day savings account, which may have hidden fees attached to it, this one will earn you more interest (1 percent or higher) over time.

“You can still access this cash without a penalty, but it’ll work harder for you over time,” says Martinez. “Don’t let your money fall between the cracks of the couch. Put it on the treadmill!”

If you have short-term savings goals such as travel, a clothing purchase, or moving into a new apartment, that money should be separate from your emergency fund, since having all of your money together can make it difficult to keep track of your goals. For instance, shortly after resetting my main savings account, I started a second one for traveling. Every two weeks, I have cash being transferred into it so I won’t have to dip into my checking account or nest egg when it’s time to buy a plane ticket. 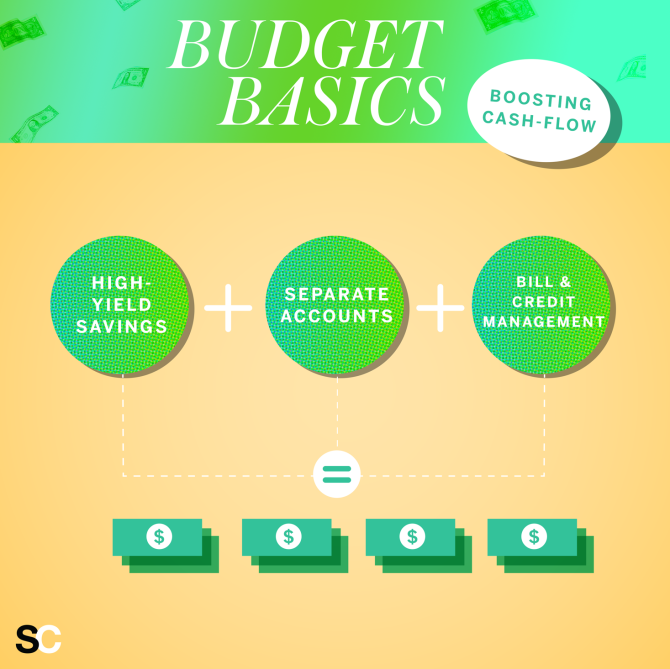 To bring everything full circle, this re-emphasizes the importance of salary negotiation, because if you want separate savings accounts for separate goals, you need enough steady income to split between them in the first place. At any given time, Martinez says everyone should have three to six months of fixed costs (rent, utilities, phone, transit, grocery, etc.) stored in a savings account. “It’s never ‘if’ an emergency happens. It’s ‘when’ the emergency happens, because believe me, they always do!”

If you’re looking to quickly boost a credit score, there are two ways to do it. First, Martinez recommends keeping your credit utilization below 35 percent. “For example, if your credit limit is $1,000, you should never spend more than $350 from that card,” she says. And the second—a no-brainer—is to simply pay your bill on time every month.

“Even if you only pay the minimum monthly payment, this will greatly impact your score. A late or missed monthly payment can drop your score, but over a period of time, this can rebound.” Both of these things account for 65 percent of your total credit score, so pay attention (and your bills) to see an almost immediate change.