I’m early in the process of exploring my queer sexuality, but during my first same-sex relationship, I felt overwhelmed about navigating how to pleasure someone with a vagina. Was there some magical lesbian sex position I was just supposed to know, one that would make my partner and I both feel amazing?

According to Rachel Klechevsky, a sex therapist specializing in queer identities, there isn’t a particular sex position that’s best for newbies still figuring things out. What works, most often, is focusing on dialogue. “Ask what they find pleasurable in giving, receiving and joint activities,” Klechevsky suggests.

Klechevsky says scissoring is an arousal activity, but not necessarily an orgasm activity. “Arousal activities increase physical desire, vaginal lubrication and send blood flow to the genitals,” she explains. “Orgasmic activities stimulate the body for orgasm.”

The next thing my partner and I tried was using sex toys to land on a position we were both comfortable with and excited about. This should go without saying, but the fable that the partner who wears the strap-on is The Man in the Relationship is totally ridiculous. My girlfriend and I are both cis-women—there’s never a man in our relationship. We both wear a strap-on depending on our sexual desires during each unique experience.

As my ex always said, queer women must explore what’s good for us. We both enjoy nipple titillation through kisses and sucking, often paired with clitoral stimulation. This combo is what led us to create a sex position of our very own. It’s somewhere between that upside-down Spiderman kiss and a traditional 69. We call it the 34.5 or The Spiderwoman. 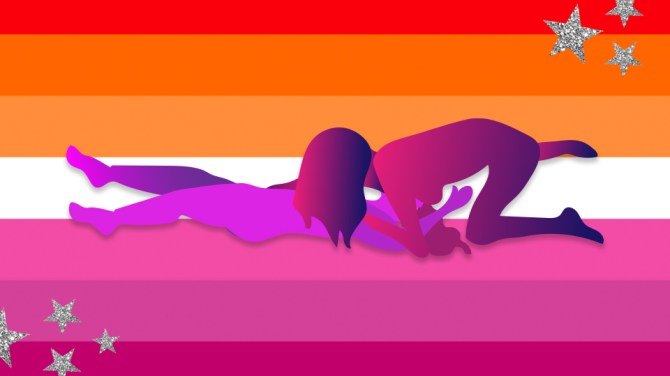 After a few mind-blowing experiences with this sex position, we started asking other queer women if they’d tried this position for themselves. Over thirty queer women said they hadn’t tried the position, but that it “made so much sense,“ “was so simple and effective” and “would cause maximal pleasure.” One queer friend said I was a trailblazer—another told me I needed to patent the position!

In discovering and creating positions that worked for myself and my partner, I’d also been able to address some internalized hetero-normative thoughts about sex. Because there was no penetration, it was embedded in my brain that the sexual acts I did with my girlfriend were merely foreplay, not sex. “For those who’ve had the majority of their sexual experiences with cis-men, sex is often comprehended as a penis-centered experience,” explains Klechevsky. “It’s a series of events that leads to penis-vagina intercourse.”

Of course, I now know that sex looks different for everyone. “The concept of penetration of the vagina with a penis as defined as sex assumes that sexual pleasure is not meant for people with vaginas if it doesn’t eventually lead to an activity that can be procreative,” Klechevsky confirms. Between learning new things and trying new positions, unpacking my heterosexual views about sex has been downright orgasmic.