Moving on. Rumors are swirling that Leonardo DiCaprio and Gigi Hadid hooked up after his breakup from Camila Morrone—and sources confirmed they’ve been hanging out recently but are taking it slow.

Sources told E! News in an article published on September 13, 2022, that Leo, 47, and Gigi, 27, had hung out “multiple” times, but were doing so in the company of friends. According to those close to him, the Titanic star wasn’t rushing back into a relationship. “He’s enjoying being single,” an insider noted, adding the two are “not exclusive.” It echoes the sentiments of another source, this one close to Gigi, who said “neither of them want a relationship” at the moment. “Gigi and Leo have hung out multiple times and are into each other. Gigi thinks he’s a really cool guy. Majority of their hangouts have stemmed from being in the same social circles at various parties.” Another source told Page Six that “[Leo] is not someone who is in-and-out of relationships. He doesn’t jump around hooking up. They are taking it slow.”

An insider told People on September 12, 2022, the A-listers are definitely “getting to know each other” but weren’t “dating” yet. Another source told the magazine that “Leo is definitely pursuing Gigi,” while another added, “They’ve been seen hanging out with groups of people. It’s only been a few weeks since the split. Since then, he’s been hanging out with friends and family.”

Life & Style reported on August 31, 2022, that Leo, 47, and Gigi, 27, had “hooked up a few times” since his breakup with Camilla, 25, and that the blonde model is “exactly his type.” News broke of Leo and Camilla’s split August 29, 2022. “Leo and Camila have had a few breaks in the past few months. It’s a matter of deciding whether they are in it for the long haul or just going to let it die,” a source told In Touch Weekly at the time. “With all of Leo’s girlfriends, once she became focused on work and had her own priorities, he got distant. Rather than have dramatic breakups, they took time apart.”

Leo and Camilla, a model and actor who is set to star in Amazon Prime Video’s upcoming Daisy Jones and the Six series, were first linked in December 2017 after Leo was seen leaving Camila’s house in Los Angeles. In an interview with The Los Angeles Times in 2019, Camilla responded to criticism over her and Leo’s age difference. “There’s so many relationships in Hollywood—and in the history of the world—where people have large age gaps,” she said at the time. “I just think anyone should be able to date who they want to date.” She continued, “I feel like there should always be an identity besides who you’re dating. I understand the association, but I’m confident that will continue to slip away and be less of a conversation.” 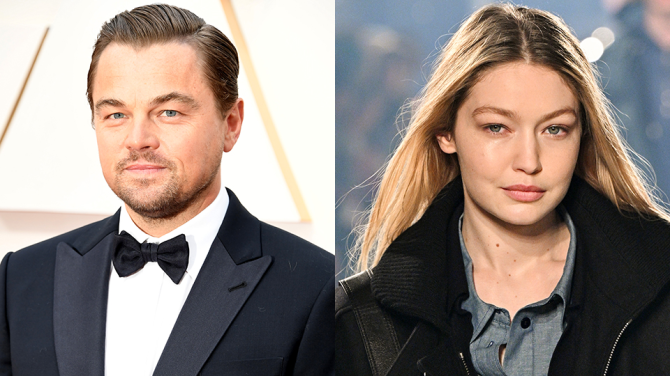 Are Leonardo DiCaprio and Gigi Hadid dating? The answer is yes. A source confirmed to Entertainment Tonight on September 14, 2022, that Leo and Gigi are “dating.” “Gigi and Leo are dating and into each other,” the insider said. The model and actor were seen together for the first time at Casa Cipriani in New York City on September 10, 2022, where they “looked very flirty.” “They were sitting in the dining room area and were canoodling and having a fun night out with each other,” the source said.

The insider continued, “Gigi arrived at Casa Cipriani a while after Leo did. They like going there because they can be private and not worry about pictures being taken of them or people noticing them too much. They are having a good time together and Leo is very attracted to Gigi.” In photos obtained by The Daily Mail, Leo and Gigi could be seen sitting across from each other with their legs intertwined as their faces were close together.

The news also came after another source told Entertainment Tonight that Leo “likes” Gigi but wants to take it slow with her. “He likes her, but things are still new,” the insider said. “He has also been hanging out with his guy friends since his split from Cami.”

According to a source for Life & Style, Leo and Gigi first hooked up after Leo’s breakup with his ex-girlfriend, Camila Morrone, and it seems like Gigi is “exactly his type.” “Leo and Gigi have hooked up a few times this summer,” a source told Life & Style in a report published on August 31, 2022. “They have known each other for several years. They’re super attracted to each other.” The insider continued, “She is exactly his type: gorgeous, sexy but low-key with a one-of-the-guys attitude.”

Another source also told the magazine that Leo and Gigi had a fling. “It’s casual and not a constant thing. But they have lots of mutual friends,” the insider said. However, a third source denied a romantic relationship between Leo and Gigi and claimed the two are just friends. A source also told Us Weekly on September 7, 2022, that Leo has her “sights set” on Gigi as his next love interest after his breakup with Camila. “Leo does have his sights set on Gigi, but she hasn’t shown an interest,” the insider said. “They’re friends, but she doesn’t want to be romantic with [him] right now.” While Leo has “his sights” on Gigi, the source confirmed that she “doesn’t have her sights on him.”

The news came after a source told Deux Moi in July 2022 that Gigi and Leo were seen together at The Ned NoMad in New York City. “Gigi Hadid and Leonardo DiCaprio partying close together at The Ned (formerly known as The Nomad hotel),” the source reported. The report about Gigi and Leo also comes after the Oscar winner was photographed partying with 22-year-old model Maria Beregova in St. Tropez, France, in July 2022. Beregova was seen with Leo around the same time she divorced her husband, entrepreneur Ahmed Masoud Abdelhafid, whose grandfather is related to dictator Colonel Muammar Gaddafi. The Daily Mail reported at the time that Beregova reverted to her maiden name around the time she was seen with Leo.

Before Leo and Camilla’s split, a source told E! News in December 2021 that the two were “going strong and doing really well.” “He’s very cozy with Cami and they’re serious,” the insider said at the time. “He is filming right now, but Leo has been settling into this domestic life with Cami, as opposed to all the time he used to spend out with his boys. He does really like his life with her and they’re a lot more coupley than they used to be.” The report came about two years before Leo and Camila made their debut as a couple at the 2020 Oscars.

A source also told Entertainment Tonight in December 2021 that Camilla and Leo were “very in love.” “They are very in love,” the insider said. “Camila is his dream girl. She’s young, sweet, simple and it’s easy because she gets along well with his family and he gets along great with hers too. They’ve known each other forever and it just works.”

As for why he and Camila broke up, a source told Page Six in August 2022 that there’s a reason many of Leo’s relationships end around the time his girlfriends turn 25 years old. “By the time girls reach 25, they’re looking for more — they’re looking to get married and settle down. That is not what Leo wants. He does not want a family and does not want to be around women who may press him for that,” the insider said. “The minute a girl meets him, the clock is ticking. If she gets too old, in a couple of years, she is gone. If she gets too close, in a couple of years, she is gone.” The source continued, “He’s gotten older but his taste has not gotten any older.”

Before his relationship with Camila, Leo had dated models like Gisele Bundchen, Bar Rafaeli, Tony Garrn and Nina Agdel, as well as actors like Blake Lively and Kelly Rohrbach. All of his past girlfriends were in their 20s at the time of their relationship.