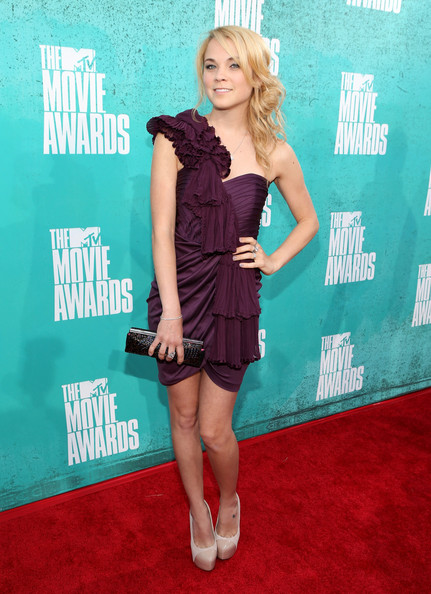 Lenay at the 2012 MTV Movie Awards

As the host of MTV’s “10 on Top,” which counts down the ten most tweeted and talked about young celebrities of the week, Lenay Dunn is obviously a pop culture whiz. So, with this year’s Video Music Awards right around the corner (this Sunday, August 25 at 9 p.m.!), we thought it was the perfect time to catch up with Dunn and have her dish on everything from her favorite VMAs fashion moments to a sneak peek at this weekend’s big show.

StyleCaster: Tell us about the VMAs this year! What can we expect?
Lenay Dunn: As you may know, Lady Gaga is performing her single “Applause” for the first time and Ariana Grande and Austin Mahone who are label mates will be performing together at the pre-show. Macklemore is performing, Bruno Mars is performing. I’ve heard Macklemore will be performing “Same Love,” which is appropriate with the world and everything that’s going on [with gay marriage]. So that will be a really cool moment to have. I think that’s going to be one of those big VMA moments!

MORE: Straight From The Oscars Red Carpet: 5 Things You Didn’t See on TV

What’s the energy like before the show? What do viewers at home not realize?
I’m not sure what the layout will be like this year, but last year they had an awesome double decker red carpet with two levels! The energy is amazing, it’s so fun hearing the audience scream—and the louder they scream, you can tell if it’s one of the night’s biggest stars!

Is there a specific order for which stars walk out on the red carpet?
The red carpet spans a couple hours, and it depends if people are on time or not when they walk. They do save some of the bigger stars for last but some people just get there earlier. I’ve been there with Katy Perry who went super early on, and that’s because she had to get ready. A lot of people may have to do last minute rehearsals for a performance or get ready for something, so it all depends.

VMAs fashion is always a spectacle. What are your favorite moments?
The fun thing about the VMAs is that everyone dresses really well but everyone has a lot of fun with it.  One of my favorite VMA fashion moments was Britney Spears when she performed in the nude rhinestone outfit at the 2000 show. It was amazing, I just loved it. Otherwise I really did like Lady Gaga‘s mohawk at the 2010 VMAs. I wish Lady Gaga would show up in a VMA egg!

There have been plenty of major moments during the show itself. Do any in particular stand out for you?
When Beyoncé showed her baby bump in 2011! I got to witness that and it was awesome.

What’s your red carpet style advice to first time attendees?
You definitely need to dress according to their hair sometimes. When I had super blonde hair I couldn’t wear some things because it would make me look washed out. You need to wear something that complements your hair. When I had blonde hair I didn’t really want to wear pink because I thought it was a little much for me. I could go with a muted pink and not a bright Barbie pink, unless that’s something you’re going for.

Also, go for a dress with a little something missing, like a cool slit like Angelina Jolie‘s Oscars moment. And you should really know what awards show you are going to. The VMAs is a really fun event. If you wear something on the more elegant side, don’t overdo it with the jewelry. Find a balance.

Wardrobe malfunctions are a big fear on the red carpet. What’s your advice?
Have your publicist bring some pins!

You look great on “10 on Top.” Do you have a particular diet or fitness regimen?
Yeah, I always try to count my calories and I think I could always do better in making those calories healthier. If I have 1500 to 1800 calories a day I’ll try to fill the remaining amount with good food. But sometimes I’ll just have two cupcakes instead! I would probably get less sugar highs and crashes if I filled that with a healthy salad instead. As for exercising, I love going for a jog. I just moved to the West Village and am a couple blocks away from the water so I jog there.

Who was your favorite guest on “10 on Top”?
Macklemore was so fun have on! Selena Gomez was also so nice and that was right when she started dating Justin Bieber, so that was super fun.