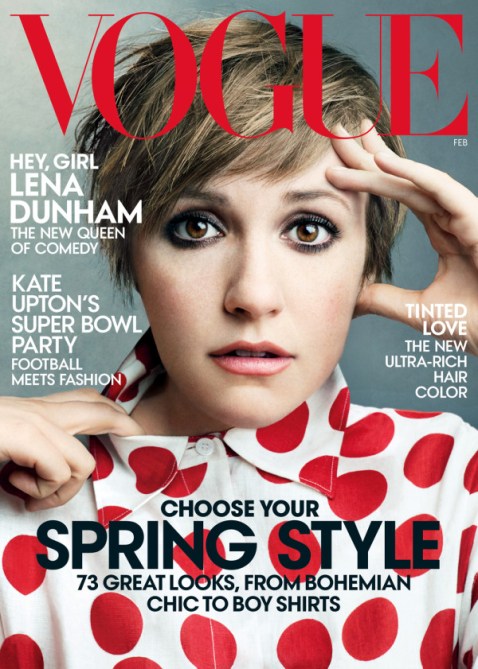 It’s finally here! After months of rumors, Lena Dunham’s Vogue cover is out!

We suspected a deal had been forged when Vogue’s Anna Wintour showed up at the season three premiere of Dunham’s “Girls” last week, but we also think it’s a bit surprising, considering how many red carpet misses Dunham’s had. Just the other day, she made a number of Worst Dressed lists for the yellow Zac Posen gown she wore to the Golden Globes.

Whether you love her fashion choices or not, though, you can’t deny that she’s a huge force to be reckoned with—and  one that we love to watch.

The cover, interestingly, features a close up shot of Dunham, rather than a full-body photo of the notoriously nudity-friendly actress. Was Wintour shy about putting a full-figured woman on the cover? It’ll be interesting to see if that fact causes a stir the way Mindy Kaling‘s Elle cover did last week.

The inside spread, however, features a full-body shot of Dunham posing gloriously with her “Girls” boyfriend Adam Driver.

Lena took to Twitter to voice her appreciation for the cover and inside spread:

And Wintour shot some love right back at her. “Lena is a strong, confident woman who charts her own path—and that, to my mind, makes her an inspiring role model and the perfect cover for our February issue,” said Wintour in a statement. “Lena has been acclaimed in so many ways, rightly being described as the voice of her generation. But the quality I admire most about her is that she is fearless; fearless in how she works, in her choices, and, of course, about fashion.”

The issue hits stands on January 28.